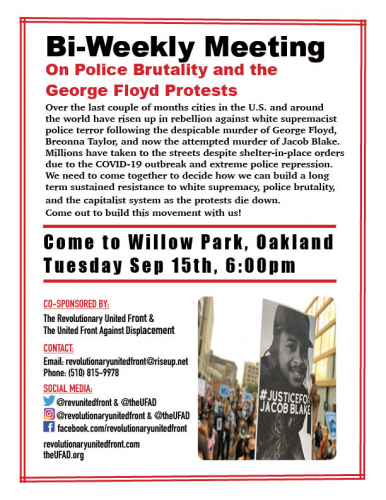 Import event into your personal calendar
Date:
Tuesday, September 15, 2020
Time:
6:00 PM - 8:00 PM
Event Type:
Meeting
Organizer/Author:
Revolutionary United Front
Email:
revolutionaryunitedfront [at] riseup.net
Phone:
(510) 815-9978
Location Details:
Willow Park
Oakland, CA 94607
In the past three and half months, cities in the U.S. and around the world have risen up in rebellion against white supremacist terror from the police following the despicable murder of George Floyd, Breonna Taylor, and now the attempted murder of Jacob Blake. Millions have taken to the streets despite strict shelter-in-place orders and they have been met with a violent response by the police. We have seen protesters beaten, tear gassed, tased, and even murdered as the state struggles to suppress this mass movement. But it is important to note that the protests are not solely a response to the murder of George Floyd. They represent a revolt against the general systematic slaughter of black people by police and against the white supremacist-capitalist state as a whole. The size and scale of these protests is remarkable and it is encouraging to witness the powerful energy that fuels them.

The problem is that we have been here before. In the past, mass protests against police terror and the white supremacist-capitalist state have occurred, but after initial outrage and police crack downs, the excitement and activity of the protests subsides. Those who are not consistently active in political work disappear while activists and political organizations fail to push the movement forward for the long haul. We need to come together as a community to discuss how we can build up a long-term sustained resistance to white supremacy, police brutality, and the capitalist system.

We cannot afford to tail spontaneous movement after spontaneous movement. We need to organize for the long-term, which means doing much more than showing up to protests every time a black person is murdered by police or voting every two years. The police harassing, terrorizing, and murdering working class people is the norm and politicians will not work to overthrow a system that keeps them paid. Reforms intended to quell police brutality are often not applied, ineffective, insufficient, or completely rolled back. If a long-term organized movement against white supremacist police terror is not sustained, then we will continue to see black people murdered in cold blood by the police.

Please come out to Willow Park in West Oakland on Tuesday, September 15th at 6pm as we continue to discuss how we can sustain this movement for the long-term. In previous meetings we determined the need for more political education and concrete steps towards some type of action that we can collectively take. We have began and will continue an ongoing political study of the Black Panther Party. We have also planned and carried out an action on August 1st where we marched from West Oakland Bart to Willow Park to show solidarity with the West Oakland Community. Last meeting we debriefed this action and discussed further steps forward.

In the next meeting taking place on Tuesday, September 15th which we are promoting in this post, we will continue to discuss plans for another action to address the lack of consistent trash pickup for both housed and unhoused residents in the area which forces people to live in abhorrent conditions. More broadly, we will continue to talk about how to link the local struggle in Oakland to the larger nation-wide movement against the white supremacist capitalist system.

We hope to see you there. All Power to the People!

END_OF_DOCUMENT_TOKEN_TO_BE_REPLACED
Added to the calendar on Fri, Sep 4, 2020 4:47PM
Add Your Comments
Support Independent Media
We are 100% volunteer and depend on your participation to sustain our efforts!