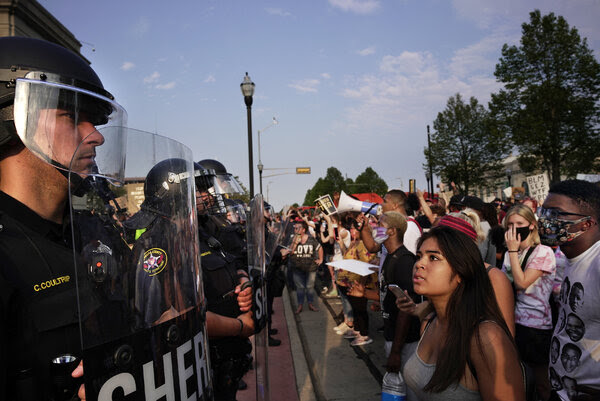 The impeached President Donald J. Trump is in lockstep with the Ku Klux Klan (KKK) when it comes to neo-Nazis and armed militias masquerading as so-called ‘patriots’ at protests across the nation, that are in league with law enforcement.

The vigilante armed militias showing up on the streets of America at protests across the nation, are comparable to the dark days of World War ll, when the ‘Brown Shirts’ supported Adolph Hitler in Germany, and the ‘Black Shirts’ supported Benito Mussolini, the dead Italian dictator and founder of fascism. They were unleashed on the public to terrorize the population, just like the vigilante armed militias in America under the Trump regime that presently are being unleashed, supported and defended.

Unleashing Of The Vigilante Armed Militias Across America:

Additionally, according to media reports, the trigger happy cops of Kenosha, were providing water to the vigilante armed militias in Kenosha in recent days, and let Kyle Rittenhouse get away after he killed two people and wounded a third person at a Black Lives Matter protest, after Jacob Blake was shot in the back seven times by a trigger happy cop.

Apparently, the impeached President Donald J. Trump and some of the cops in Kenosha are in lockstep with the beliefs of the Ku Klux Klan (KKK).

Click here for an August 31, 2020, release with the KKK, where Thomas Robb, head of the Knights Party of the KKK declares, “How is calling people together to protect our cities and it’s businesses considered a threat to public safety? If rioters were at your home, breaking out windows, preparing to burn your home down, and your neighbors came to your aid to prevent that, would it be considered criminal activity by your neighbors? Of course not!”

Now, click here to listen to Trump’s brutal response when a reporter asks him to condemn the murderous actions of Kyle Rittenhouse who killed two protesters, and wounding a third protester in Kenosha, Wisconsin.

Trump's response is an echo of the statement made by the leader of the KKK, Thomas Robb, who is a big Trump supporter.

The impeached President Donald J. Trump’s public support and defense of the unlawful vigilante armed militias masquerading as an unofficial branch of law enforcement is directly catering to his base for political reasons. Trump is apparently providing the white supremacists, armed militias, and KKK an incentive to use violence to go after peaceful protesters.

Additionally, a local armed alleged 'boogaloo member' with a huge arsenal was reportedly arrested for threatening a government official of the health department in the Bay Area, who is trying to protect us from the coronavirus Covid-19 pandemic, raging throughout the nation.

It was as recent as June 4, 2020, reportedly that three members connected to the “boogaloo movement” had a plot to terrorize a Las Vegas, Black Lives Matter (BLM) protest against the murder of George Floyd, by killer cops.

Reportedly, making matters worse, during an interview while discussing the shooting of a person “in the back many times”, an apparent reference to the shooting of Jacob Blake, who was shot seven times in the back by a cop in Kenosha, Wisconsin, Trump has compared trigger happy cops who wrongfully shoot people, to golfers who “choke” in a golf tournament.

In another major incident providing comfort and support to the vigilante armed fascists infiltrating protests across the nation, during the Republican National Convention, reportedly Vice President Mike Pence made a misleading statement about a federal officer murdered in Oakland during a BLM protest earlier this summer. Right-wing extremist fascist VP Pence tried to mislead the national public into believing that the federal officer was killed by protesters, instead of a member of the right-wing fascist ’boogaloo’ movement.

The Trump regime, fascists, white supremacists, KKK, armed militias and other violent right-wing extremist groups are very concerned about the anti-fascists and the so-called antifa movement.

They have been studying the anti-fascists and the so-called antifa leftist movement for years, and are keeping track of what is being written about fascism.

The violent fascists continue to organize around the globe waiting for the opportunity to destroy what is left of the so-called democracies in the United States, and other countries throughout Europe.

With the full support and defense of the Trump regime that is promoting violence and a race war across the nation, our democracy is totally under attack.

Meanwhile, the Trump regime is destroying the Postal Service to delay the mail-in ballots, in an effort to sabotage the November 3, 2020 election.

Fascist/neo-Nazi and organizer, Gabriel Sohier-Chaput is currently in the courts for his activities. He was involved with the fascists, neo-Nazis, KKK and white supremacists in Charlottesville a few years ago when Heather Hyer (died) was run down along with around 19 other protesters by a white supremacist.

Gabriel Sohier-Chaput a.k.a. Charles Zieger or Zieger has also been connected to neo-Nazi fascist right-wing extremists groups including The Storm Front, Montreal Storm, Iron March, Iron Pride, Noose, and many other other right-wing extremist hate groups.

Much of the unleashing of the extremist right-wing vigilante armed militias in our country is a direct result of the organizing efforts of Gabriel Sohier-Chaput a.k.a. Zieger, Andrew Anglin founder of The Daily Stormer, and other neo-Nazis groups and armed militia members that Trump apparently is openly supporting and defending since he has been in office.

I believe the hate groups and those involved need to be exposed so people can see where this country is headed with the fascists in control in the White House.

See a few links below...

>>>>>
Alleged neo-Nazi responds to long-standing arrest warrant
Gabriel Sohier Chaput was the focus of a series of articles published by the Montreal Gazette in 2018 alleging he was a recruiter for a white supremacist group.

Author of the article:


Gabriel Sohier-Chaput a.k.a. Charles Zeiger or Zeiger is or was a writer for The Daily Stormer

>>>>>
>>>>>
Gabriel Sohier-Chaput a.k.a. Charles Zieger, has been connected to, and has organized with some of the following hate groups.