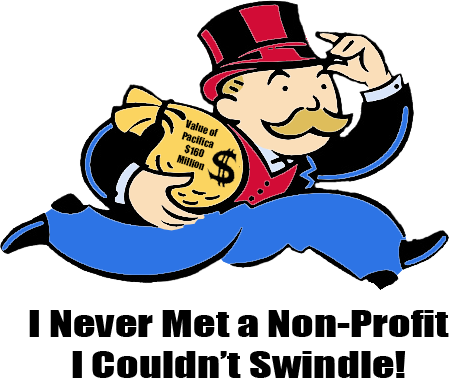 After spending more than $150,000 defending Pacifica from a hostile Bylaws Referendum in March of this year, we may have to do it again!
These are the same players, at it again, trying to sell the concept that a small group of elitists can govern Pacifica better than a board democratically elected by the members. The last Referendum was voted down by an overwhelming majority of Pacifica members and staff, yet here they come again. Why? We won’t speculate too much on that but let’s just say that the Pacifica Radio Network assets, including its buildings and broadcast licenses, have been valued at $160 million dollars. Yup. Follow the money, not the rhetoric. If they keep filing two or three referendums each year to eliminate our democratically elected boards, maybe they’ll be successful in pushing us into bankruptcy and selling off the buildings and signals. Who knows?
The Pacifica Radio Network has been broadcasting since 1949, that’s 71 years, isn’t it? It has been run by democratically elected boards since 2002, the last 18 years, and it’s still on the air. Many other progressive nonprofit media corporations have bit the dust: Air-America Radio, Current TV, Al-Jazeera America, etc. And others are currently falling apart. All run by appointed boards.
DON’T SIGN THE PETITION!
The petition requires 5% of the members to sign – and then we’re into the same cycle, costing Pacifica $150K or more, and everyone wrapped up in defending Pacifica from a hostile takeover. Just don’t sign it. As soon as we find out the particulars of what is being proposed we’ll let you know. Right now, they’ve started by asking for the right to send you emails, but up to this point the plot has been kept secret. Also, signing the petition means you would be endorsing it, not just giving it a chance.
Pacifica has been here for you, and with your support, it is keeping the airwaves honest and free. Support democratically elected local and national boards for Pacifica and avoid the corporatization of America's oldest and most stable Free Speech Radio.
Add Your Comments
§Recommendations from Disinterested Parties
by Akio Tanaka
Saturday Aug 29th, 2020 2:38 PM
The current Pacifica auditors, Rogers & Company, recommended a change in Pacifica governance.
‘Help Pacifica- Support the New Bylaws- Do Sign the Petition!’
https://www.indybay.org/newsitems/2020/08/29/18836256.php

The previous Pacifica auditors, Regalia & Associates, made a similar recommendation.
“It appears Pacifica is unable to map out an effective and safe strategy due to the disjointed nature of its various governance Boards which appear to be working at cross purposes… As auditors, we strongly recommend an end to the infighting and unproductive arguments which we have witnessed by listening to and reading Board minutes. The organization’s ability to continue as a going concern is directly related to its ability to follow a rational plan and financially sensible strategy.”
Add a Comment
§Pacifica does not need autocratic corporate management to flourish!
by listener
Saturday Aug 29th, 2020 5:23 PM
Our opposition, of many names, sometimes called "United for Independent Radio" (UIR) is continually telling us that the Pacifica National Board can't accomplish anything, but actually. they have done a lot in spite of such opposition groups. There is now a newsletter from Pacifica already referred to by Aki, detailing recent accomplishment by the National Board, which you can see at https://pacifica.org/good_news_200824.php . In the recent past they have avoided the treacherous so called Voluntary Bankruptcy which would have taken decision making from our democratic self government and into the hands of a judge or bankruptcy committee.
Pacificans and the Pacifica National Board saved over a million dollars by negotiating WBAI out of a disastrous transmitter agreement (made by others). And out of a fiscal misfortune which steered the network into an acceptance of a measure which was supposed to save it, but actually would help them gain control of KPFA. Fiscal mismanagement has been a tool of theirs for many years and still today, such as this attempt to hold this bylaws revision in an expensive separate election.
One of the main obstacles to informed governance has been this very group. What may be pictured as needless squabbling is actually others in the network refusing the onslaught of this (and other groups) trying to bring their station under their own autocratic rule. We will continue to "squabble" to defend this listener supported democratically run radio network free and closer to telling the truths the major media don't and won't.
Add a Comment
§same detergent, different box, new artwork
by Mo Better BS
Sunday Aug 30th, 2020 5:50 PM
it's really that simple .. like the detergent game
"New Blue Power Granules"
and they found a new headliner for their show
(remember last time she quit .. )
when will these people start putting all this $$ & energy into
- growing listenership
- growing membership
- KPFA's membership and Nielsen's ain't that great and been
declining for years / they have a payroll gorilla on their back
- KPFK is bleeding $$ in the 2nd largest US media market
member support is in the toilet / only a slightly smaller gorilla
and both stations are run with the "top down" "professional"
management and programming style that's supposed to
be such a silver bullet
why shoot yourself in the head ?
don't sign, wear your mask