Add an Event
Newswire
Calendar
Features
Home
Donate
From the Open-Publishing Calendar
From the Open-Publishing Newswire
Indybay Feature
Related Categories: San Francisco | Education & Student Activism
Protect Public Education! Turn Our CCSF Community Demands into CCSF Board Goals!
by repost
Thursday Aug 27th, 2020 10:48 AM
San Francisco Community College is being liquidated by the their Board of Trustees. Students have put together demands to defend it. 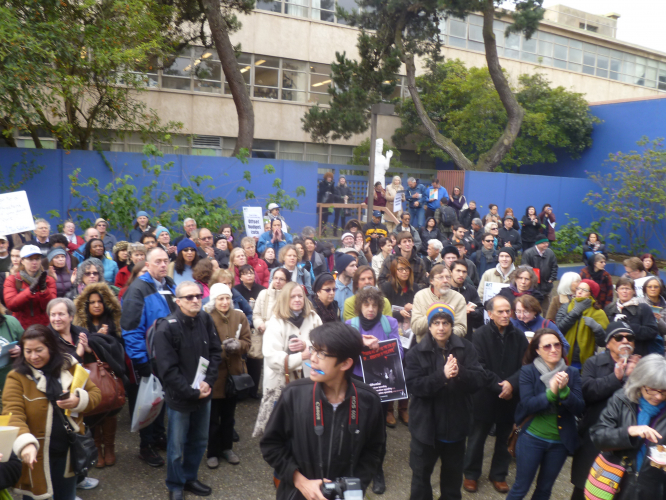 CCSF Collective started this petition to CCSF Board of Trustees
Below, we lay out a summary of CCSF community demands​, which outline our call for justice and change. The full list of 34 demands, viewable here, are in no way depicted hierarchically.

We demand that they are explicitly adapted into the CCSF Board of Trustees' "Board Goals", and that they direct and hold Chancellor Vurdien accountable for addressing these issues using transparent and measurable strategies.

The administration must publicly respond by ​August 27, 2020, at the Board of Trustees Meeting.

In summary, the CCSF Board of Trustees MUST:

Protect the Older Adult (OLAD) Department. Restore the 90% of classes that were cut, which included a range of subjects from Art to Physical Education, without restrictive admission requirements or financial barriers. (#5)

Demand a full financial analysis of gains/losses from offering non-credit classes. Calculate the revenues that come from the current funding formula, including the so-called hold harmless, and the costs of running a class. (#19)

Ensure an honest administration. All decisions must have supporting documents shared across all platforms, and communications must be widespread. (#24 - 25)

Cultivate student power. Give voting power for the student trustee, have training for student representatives, and have vacant city-wide, college-wide council, and committees positions for students promoted across all official CCSF platforms. (#23)

Public education is under attack. Sign this petition to protect our campuses, our future, our students. Here is our list of demands to the CCSF Board of Trustees and Chancellor Vurdien.

The Board of Trustees unanimously shut down CCSF Fort Mason on 5/29 despite Fort Mason being open to renegotiation. We hope to overturn the ruling, and fund our futures. The current lease ends this September.

The CCSF Board of Trustees is responsible for the policies and direction of the college. San Francisco needs a Board of Trustees that truly represents CCSF stakeholders’ needs. The actions of the current trustees have altogether led to hundreds of classes cut, part-time faculty losing employment and healthcare, budget mismanagement, lack of racial diversity in the hiring and student support services, along with a campus closure (with another possible campus closure with Civic Center Campus).

Thus far, their actions do not reflect genuine intentions for the sincere long term survival and proliferation of our working class communities. We are enclosing a list of demands so the Board of Trustees can be accountable to our CCSF community. It’s time that the CCSF Board of Trustees engage in actual collaboration with us all. Otherwise, the upcoming elections represent an opportunity for a new direction.

***Articles on class cuts, campus closures, protests: linktr.ee/ccsfcuts ***
http://linktr.ee/ccsfcuts
Add Your Comments
Support Independent Media
We are 100% volunteer and depend on your participation to sustain our efforts!