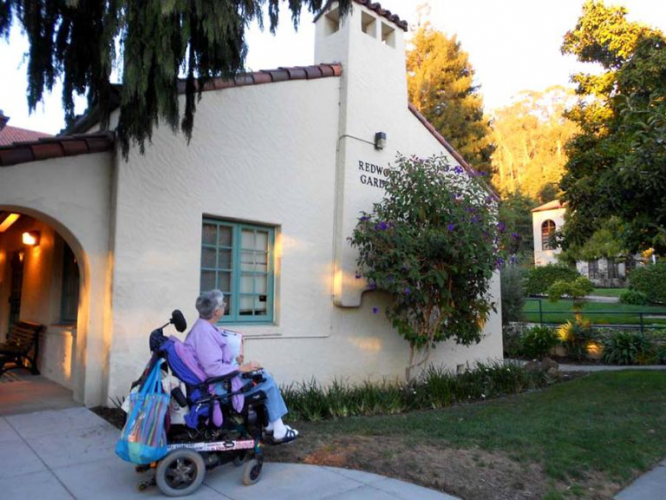 The residents of Redwood Gardens senior housing in Berkeley were shocked yesterday when they received a notice posted on their doors on August 24, 2020, stating that the residential building they reside in is in the process of being sold to Foundation Housing, of North Bethesda, Maryland, a non profit housing developer.

During an interview earlier today with 73 year old Stefen, an artist who has resided at Redwood Gardens for 5 years, he stated, “We received the notice yesterday informing us that Redwood Gardens is in the process of being sold, and the completion of the sale of Redwood Gardens is expected to take place sometime this fall. We will have to sign new contracts when the building is sold. This was a big surprise to the tenants, and we did not know the building was up for sale until yesterday. The notice mentions the names of Todd Travis of Foundation Housing, and Andrew Agetstein of the Pennant Housing Group as being involved in the sale and takeover of Redwood Gardens. I suspect that the current owner of Redwood Gardens called CSI, was not pleased about owning Redwood Gardens in Berkeley, and Northern California, because CSI believed that the tenants were too radical for them, and would fight for their housing rights as tenants in the building. The Gray Panthers of Berkeley were instrumental in the creation and construction of Redwood Gardens years ago for seniors in Berkeley, and I hope that we will not be displaced by the new owner when they take over.”

Stefen is an artist and painter who specializes in murals, and some of his art work may be found by clicking here.

Eleanor Walden, a long time tenant of Redwood Gardens senior housing, and Board Member of the National Alliance of HUD Tenants (NAHT), stated, “We were shocked to receive notice yesterday that our building is being sold. We have been told that things will stay the same for the tenants, but we will have to sign new contracts. Things will remain the same? That remains to be seen, and we will know more about our fate in the near future. We did not have any advance notice that our building was up for sale, and it was a big surprise.”

Redwood Gardens, 169 units of subsidized affordable housing for seniors and the disabled, located at 2951 Derby St., Berkeley, is currently owned by Cooperative Services Inc. (CSI), and it’s affiliate CSI Derby Street Nonprofit Housing Corporation. It was built around 34 years years ago. Management at Redwood Gardens was not available when I wanted to get a quote from them about the process of Redwood Gardens being up for sale.

Foundation Housing Is In The Process Of Purchasing Redwood Gardens Senior Housing:

Foundation Housing, a 501(c)(3) non profit organization, is also known as the National Foundation For Affordable Housing Solutions INC., according to the latest 990 tax filing from 2018 for the organization.

Unfortunately for the older radical leftist tenants at Redwood Gardens in Berkeley, Jason Goldplatt is a staunch Republican, who resides in Bethesda, Maryland. Goldplatt made a $3,000 campaign contribution to the Maryland Republican State Central Committee during May of 2018.

Todd Travis who’s name is listed on yesterdays shocking notice to the tenants at Redwood Gardens, is also a staunch Republican who resides in Maryland, and made a $3,000 campaign contribution to the Maryland Republican State Central Committee during May of 2018.

The crazy Republicans and the loony tunes Trump regime have been trying to keep people from voting by sabotaging the Postal Service, and are falsely claiming that mail-in voting used by many elderly senior citizens will result in fraud without offering any evidence to back their paranoid false assertions.

The tenants at Redwood Gardens are concerned that their building is being sold. The new landlord (staunch Republicans), may want to displace the older tenants and the disabled to bring in higher income renters, or force them out by doing a major rehabilitation project at the building when they take over in the near future.

Redwood Gardens went through a major rehab project around 5 years ago that forced many tenants to put their possessions into storage while the construction work in their apartments was being done.

Lynda Carson may be reach at tenantsrule [at] yahoo.com


>>>>>>
>>>>>>
Add Your Comments
LATEST COMMENTS ABOUT THIS ARTICLE
Listed below are the latest comments about this post.
These comments are submitted anonymously by website visitors.