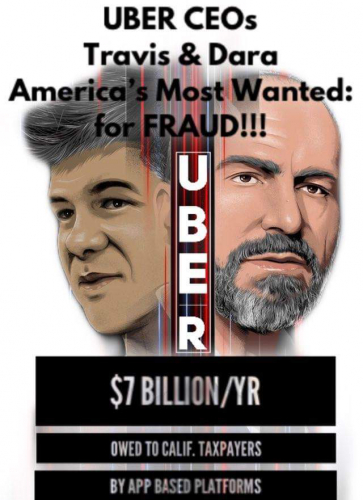 AB5, which became law on January 1, 2020, required that UBER, Lyft and other gig services like Instacart, DoorDash, GrubHub, Amazon Flex, and Target-owned Shipt must properly classify their drivers as employees & pay for their disability, social security and workers compensation.

Despite the passage of AB5, UBER CEO millionaire Dara Khosrawshahi has refused to follow the law and is appealing it in the courts to stall his compliance.

They are also spending over $110 million on Proposition 22 to overturn AB5 in November.
The failure to pay their workers is not only costing the workers their necessary protections but also is cost shifing their costs to the public tax payer.

California is losing $7 billion+ a year from the brazen criminal malfeasance and fraud. The drivers, their families and the public are paying the costs of this criminality.

We demand that Dara and the other billionaires pay what they owe and that San Francisco District Attorney Chesa Boudin and California Attorney General Xavier Becerra immediately criminally prosecute Dara Khosrawshahi and other corporate executives for failure to provide workers compensation for the workers.
Failing to have workers' compensation coverage is a criminal offense. Section 3700.5 of the California Labor Code makes it a misdemeanor punishable by either a fine of not less than $10,000 or imprisonment in the county jail for up to one year, or both for failure to provide workers compensation.

No One Is Above The Law - Including UBER CEO Dara Khosrawshahi - Stop Bullying UBER/Lyft Drivers and The Public
Stop Ripping Off Drivers - Pay What You Owe!

SF DA Chesa Boudin and CA Attorney General - Prosecute Dara and his cronies for failure to pay for Workers Compensation.

Organizers:
United Public Workers For Action UPWA.info
(AIW) Alliance for Independent Workers - GiGsUP.org
http://UPWA.INFO GIGSUP.ORG
Add Your Comments
Support Independent Media
We are 100% volunteer and depend on your participation to sustain our efforts!