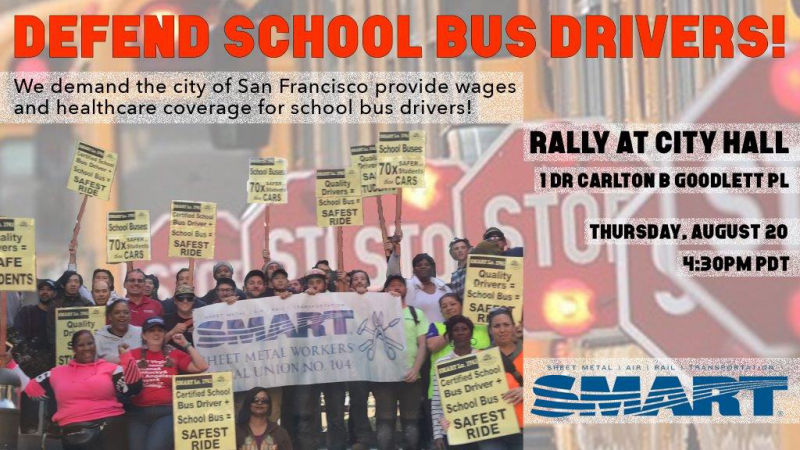 original image (1024x576)
As San Francisco starts the new school year, all school bus drivers for the San Francisco Unified School District have been given layoff notices, effective Aug. 31. Some 260 workers are affected by this sudden announcement.

In response, the union, SMART Local 1741 (Sheet Metal, Air, Rail and Transportation) and the workers we represent will hold a rally on the steps of San Francisco City Hall this Thursday, August 20, at 4:30pm.

This is unconscionable. Despite preserving the wages and benefits for drivers and staff since shelter‐in‐place began in March, it is at this critical point that SFUSD has decided they will no longer pay until the buses are rolling again. The chaos as members scramble to maintain health care coverage for themselves and their family, and then switch coverage back a few months later when they return to work, is completely unnecessary and a preventable catastrophe.

The decision to cut wages and benefits for school bus drivers will impact long‐time workers, some who have been driving for the district for decades. This will not only mean a loss of wages for the 260 workers, but will also stall the required training and certification drivers go through to ensure we are the safest mode of transport for children.

Other major school districts in the state have committed to maintaining health care and wages for their bus drivers. Those districts are covering their transportation contracts until students are safely phased back to in‐person. But here in San Francisco, drivers are expected to wait with no wages and no health care until routes start up in a few months.

We understand there is a budget crisis in San Francisco. But we do not think it should be balanced on the backs of the drivers and staff that have transported the youth of San Francisco for 50 years. Especially not over the expense of a few months to maintain the fleet. And especially not with pledges from the City and the State to ensure schools are funded for this upcoming year.

These layoffs mean specially certificated drivers will be forced to look elsewhere for work and not be available to return to work when in‐person schooling resumes. The District has already given transportation contracts to Zum, a rideshare company much like Uber and Lyft. The layoffs of certificated unionized drivers will open the door for further utilizing of lower‐paid, non‐unionized workers without the special safety training that current bus drivers complete and keep up‐to‐date. This is another blow to the proud union town of San Francisco.

Who are the drivers, dispatchers and staff facing this disaster? We are graduates, parents and grandparents of graduates from SFUSD. We are immigrants. We are working families representing the entire spread of diversity found in the Bay Area. We have served the city of San Francisco for 50 years. And we do not think it too much to ask that the city find a way to provide for us for a few months so that we are able to return to the job that we are proud to do.

We hope you will join us as we raise our voices to defend the school bus drivers of this city.
https://sfschoolbus.org
Add Your Comments
Support Independent Media
We are 100% volunteer and depend on your participation to sustain our efforts!