Add an Event
Newswire
Calendar
Features
Home
Donate
From the Open-Publishing Calendar
From the Open-Publishing Newswire
Indybay Feature
Related Categories: San Francisco | Labor & Workers
Giants and Warriors Workers Rally at Ballpark
by Marc Norton
Monday Aug 17th, 2020 9:38 AM
Giants and Warriors workers rallied at the Giants ballpark on Friday, August 14. The Giants have lost 13 out of 19 games since the Giants fired their concession workers. 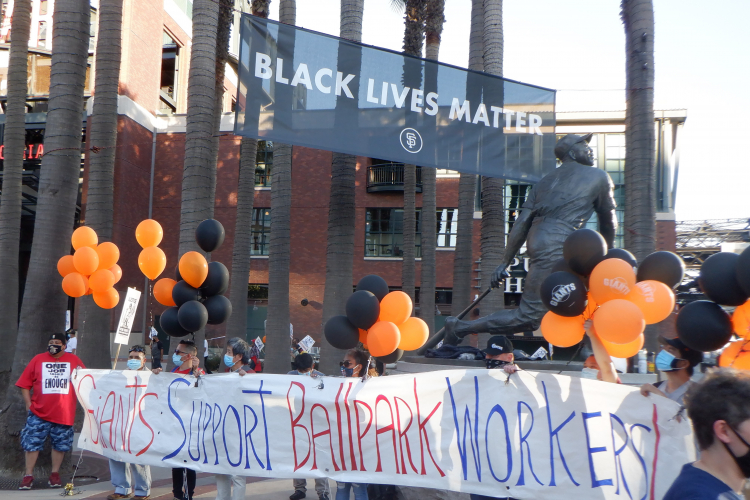 The San Francisco Giants returned home on Friday, August 14 and found themselves being picketed by the workers who normally sell garlic fries and beer to the fans. This must have been bad karma, as both Friday and Saturday the Giants blew a big lead over the Oakland A’s in the ninth inning, then got blown away by the A’s on Sunday 15-3. In fact, ever since the Giants fired their concession workers on July 27, the team has lost 13 out of 19 games.

The Warriors quickly piled on, firing their concession workers as well, for a grand total of 2,154 pink slips. Actually, in the modern world, pink slips are delivered by email and are thus colorless. The Warriors, of course, were out of contention already. Any relationship between the Giants’ and Warriors’ bottom-dwelling standings and their cruelty towards their workers is only circumstantial.

There are stories circulating that the Giants are considering rescinding these boneheaded terminations, but none of us have seen anything official yet. There are also rumors that the Giants might start winning games.

UNITE HERE Local 2, which represents both Giants and Warriors food-service workers, has so far concentrated its return fire on the Giants, who at least provide a visible target. That is why, according to the San Francisco Chronicle, “Hundreds of demonstrators took to Willie Mays Plaza on Friday night calling for justice for Oracle Park’s out-of-work food-service employees.” You can find some video and photos of this action on my website - https://marcnortononline.wordpress.com/1004-2.

Local 2 has upped the ante, demanding not only that the Giants toss the terminations, but that they pony up some money for their out-of-work workers. The Giants are certainly making money selling broadcast rights to their games, if not from selling garlic fries and beer. Nobody has suggested that they are about to go out of business. But their workers – many of whom have worked for the Giants for 20, 30, even 40 years – are struggling to pay their rent and put food on the table.

The Giants so far say that they won’t even talk to Local 2. Apparently, for the Giants, whose workers are overwhelmingly people of color, Black lives matter, unless they work for the Giants. Brown lives, Asian lives and even white lives don’t matter much either.

The Giants are trying to hide behind the fact that it was their subcontractor Bon Appetit that formally gave the workers the axe. But San Francisco Supervisor Matt Haney, who joined us at our protest, put it this way: “The reality is that these workers may work for a subcontractor, but when you look at their shirts it says GIANTS.”

I wonder if Charles Johnson has been watching Giants games, or if he is content to just count his money. Johnson, for those who don’t already know, is the primary owner of the Giants. He is worth around $4.5 billion dollars. Forbes Magazine describes the source of his wealth as “money management.” Now, that’s a job I would like. Johnson is of course a big-time supporter of Dark Ages Donald Trump.

Johnson got himself in a public relations scuffle a while back when it was revealed that he helped fund a racist ad in support of a Southern congressman. Johnson subsequently tried to distance himself from this ad, issuing one of those “gee I didn’t know what people were doing with my money” sorta apologies. Money management, indeed.

But then Johnson stepped into it again, getting caught donating money to racist Mississippi Senator Cindy Hyde-Smith who brags about wanting to be “in the front row” of a “public hanging,” and also appeared in a video saying “there’s a lot of liberal folks… who maybe we don’t want to vote. Maybe we want to make it just a little more difficult.” When all that hit the media, Johnson issued another one of his sorta apologies.

Larry Baer, the Giants CEO, had to run cover for Johnson in the Hyde-Smith imbroglio. Baer himself is no stranger to apologies, having been sent to the woodpile after he got caught on video assaulting his wife. He was suspended for three months from his job with the Giants, after apologizing, this time for his own actions.

It seems the Giants higher-ups are very practiced at issuing apologies. So they ought to be able to apologize now for firing their concession workers, and reach into their back-pockets to put some substance behind that apology.

Local 2 has plans to be back at the Giants ballpark in force when the Giants next face the Dodgers, on August 25 – unless the Giants somehow come to their senses before then. See you all there.

Marc Norton has been a member of UNITE HERE Local 2 since 1976. He has worked as a dishwasher, steward, cook, bellman and cashier. His website is https://MarcNortonOnline.wordpress.com.
§
by Marc Norton
Monday Aug 17th, 2020 9:38 AM 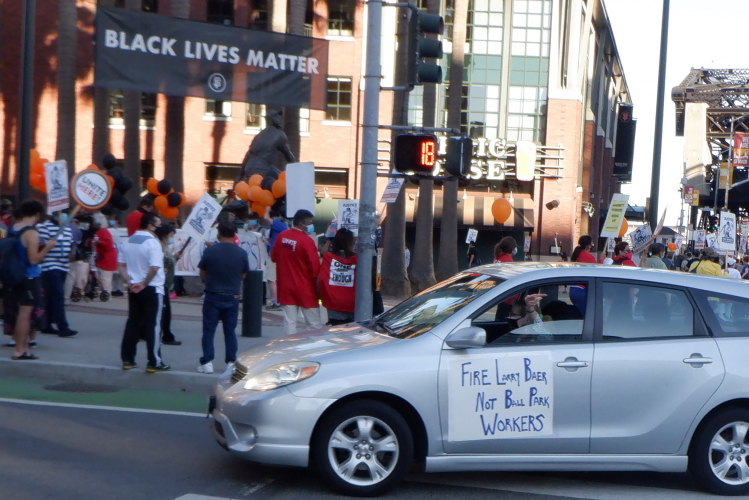 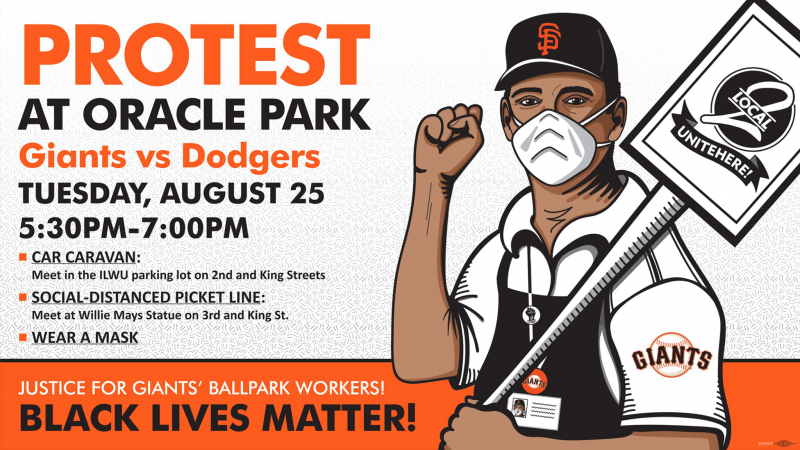 original image (2048x1152)
Bon Appetit, the food-service subcontractor for the San Francisco Giants, has bowed to one of our demands. They sent an email out Wednesday evening, August 19, that read:

This concession clearly shows the power that working class people and people of color can exert when we fight back in a united and organized manner.

But it is not enough! We are not satisfied by merely NOT being fired. The billionaires who own the Giants are making millions more right now. Those of us who have contributed for decades to the team’s profits in a huge way deserve our fair share.

We also want to hear whether or not our terminations from the Warriors’ Chase Center are also being rescinded.

Join us at the ballpark on Tuesday!
Add Your Comments
Support Independent Media
We are 100% volunteer and depend on your participation to sustain our efforts!