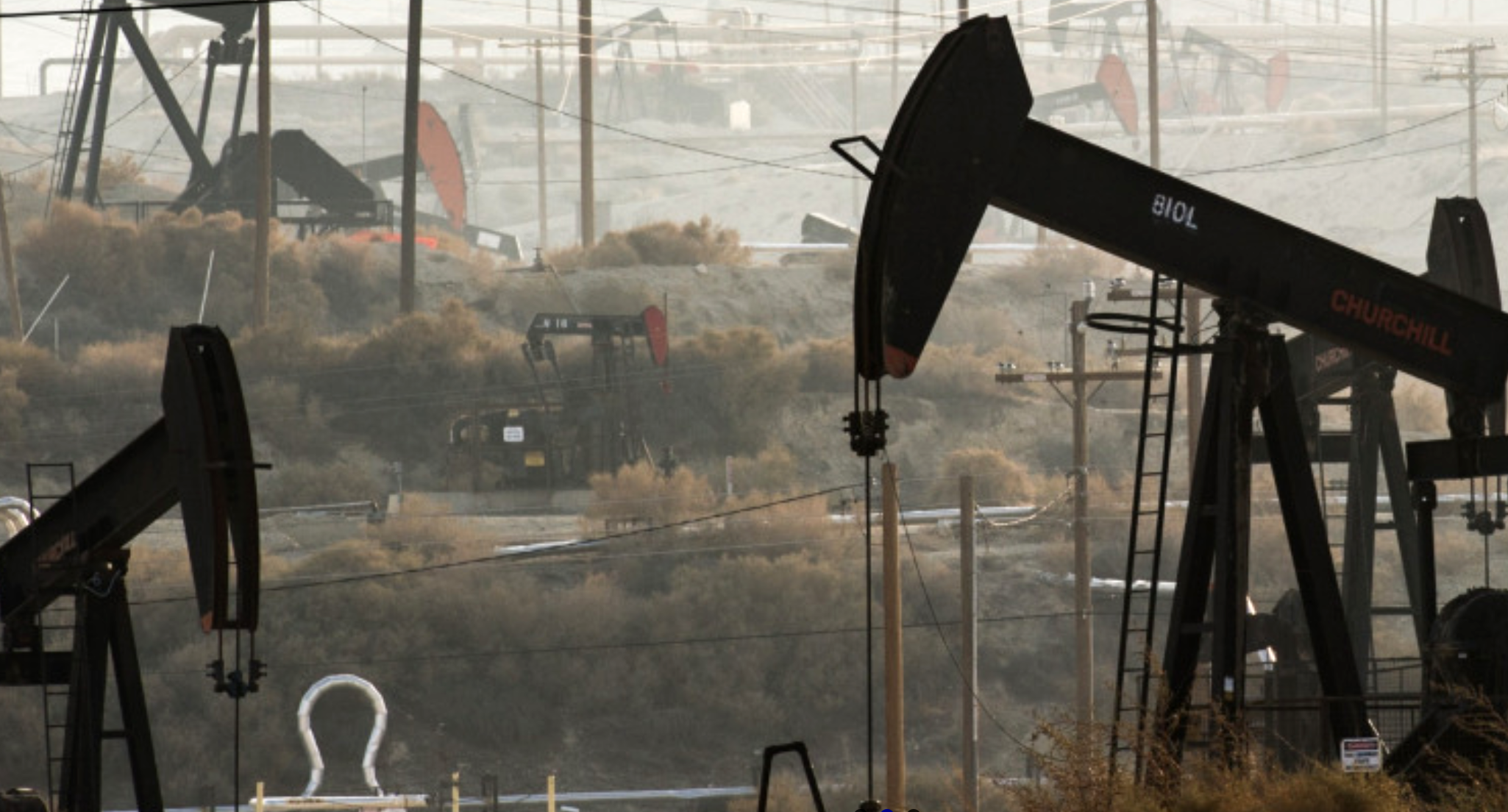 Sacramento, CA- In the midst of this unprecedented public health and economic crisis the need to change our energy usage to 100 percent renewable has crystalized as we witness how communities of color have been devastated more by the pandemic. Too often it’s because they live in environmental sacrifice zones. Much of this environmental degradation has been caused by  oil and gas wells that have been poisoning communities for decades — putting the lives and livelihoods of thousands at risk. Adding insult to injury, those same communities are too often left with the cleanup and Californian taxpayers with the associated costs.  Governor Newsom claimed he would phase out all oil and gas wells and completely transition to renewable energy sources by 2045 but his promise is not being kept. Since April over 20 new fracking permits have been issued by Governor Newsom’s administration, ending the moratorium on fracking permits that the governor issued last year. Elected officials across the state want to hold the governor to his promises. Even before these new wells and fracking sites are being developed, millions of Californians are having their health and well-being threatened by existing wells.

“There are one million people residing within a five square mile radius of the Inglewood Oil Field, which sits atop the Newport Inglewood fault line. Disaster could strike at any time. Its infrastructure is nearly 100 years old. Within the past few years, there have been several leaks and spills. We have to protect our people, not the fossil fuel industry,” said Meghan Sahli-Wells former Culver City Mayor, and current council member. “I’m proud to serve as Co-Chair of Elected Officials to Protect California, where more than 300 of us signed a letter asking the governor to take action to halt permitting, and phase out fossil fuel production once and for all.” More than 350,000 Californians are exposed to degraded air quality on a daily basis solely because they live within 600 feet of an oil or gas well. Even more people, over 2 million Californians are endangered by the toxic contaminants oil and gas wells spew into the air because they live within 2,500 feet of an oil or gas well. This already toxic living environment is made even worse by the propensity that these wells have to leak and spill. When these wells leak or spill, the damage goes far beyond the people who live in a 2,500 foot radius.

The oil leak that turned into a spill in Ventura County, California in 2016. Depicted here and in the two photos below. Crimson Pipeline has a long history with 11 spills, since 2006

Just on July 22, four years after nearly 50 thousand gallons of unrefined crude gushed out of a pipeline the company responsible will have to pay $1.3 million in civil penalties, costs and natural resources damage. The same company, Crimson Pipeline LLC, had been responsible for 11 spills since 2006.    “No amount of money can make up for the failing health of some residents affected by the pollution, the stress of living in the midst of a spill during the cleanup, and the heartache of seeing their homes destroyed by oil,” said Oxnard Mayor Pro Tem Carmen Ramirez, Esq, EOPCA Steering Committee Member.  “Enough is enough. We need to transition our state to 100 percent clean, renewable energy and shut down oil operations, while making sure all former oil workers are transitioned to high paying jobs in the clean energy sector. Our people must come first, not the bottom-line of a failing industry.”   [gallery ids="949,948" type="rectangular"] While millions of Californians are being exposed to toxins created by the fossil fuel industry when they do not properly manage and plug oil and gas wells, this poison is not evenly distributed to all. Over 8,500 active wells are located within 2,500 feet of homes, schools, and hospitals, poisoning people while they are unguarded and exposed. Between 2011 and 2018, 76 percent of new oil wells permitted were placed in communities with above average poverty rates for California and 67 percent located in communities of color. If these wells leak the fumes can cause nausea, dizziness, and shortness of breath. By not acting the state of California is further endangering the sick, the young, the impoverished, and communities of color, those who are the most vulnerable to the dangers of our world. “With refineries surrounding the area I represent in Solano County, I see pollution degrading the quality of life for many of our most marginalized residents. In the portion of Vallejo we have high rates of asthma, cancer, and other health issues related to pollution. Refineries leak,” said EOPCA Monica Brown, Supervisor, Solano County. Even more devastating are the carcinogens, such as benzene, and other toxic pollutants that too often leak from these wells and contaminate the air and, in many cases, the groundwater and local water supply.  “The oil industry also pollutes the groundwater, making us sick.” said Felipe Perez, Fresno City Councilmember and Elected Officials to Protect California. “In Fresno half of the water has been polluted by fossil fuel companies who sold their toxic waste to farmers as a pesticide. We need to stop drilling. Water is a human right.” 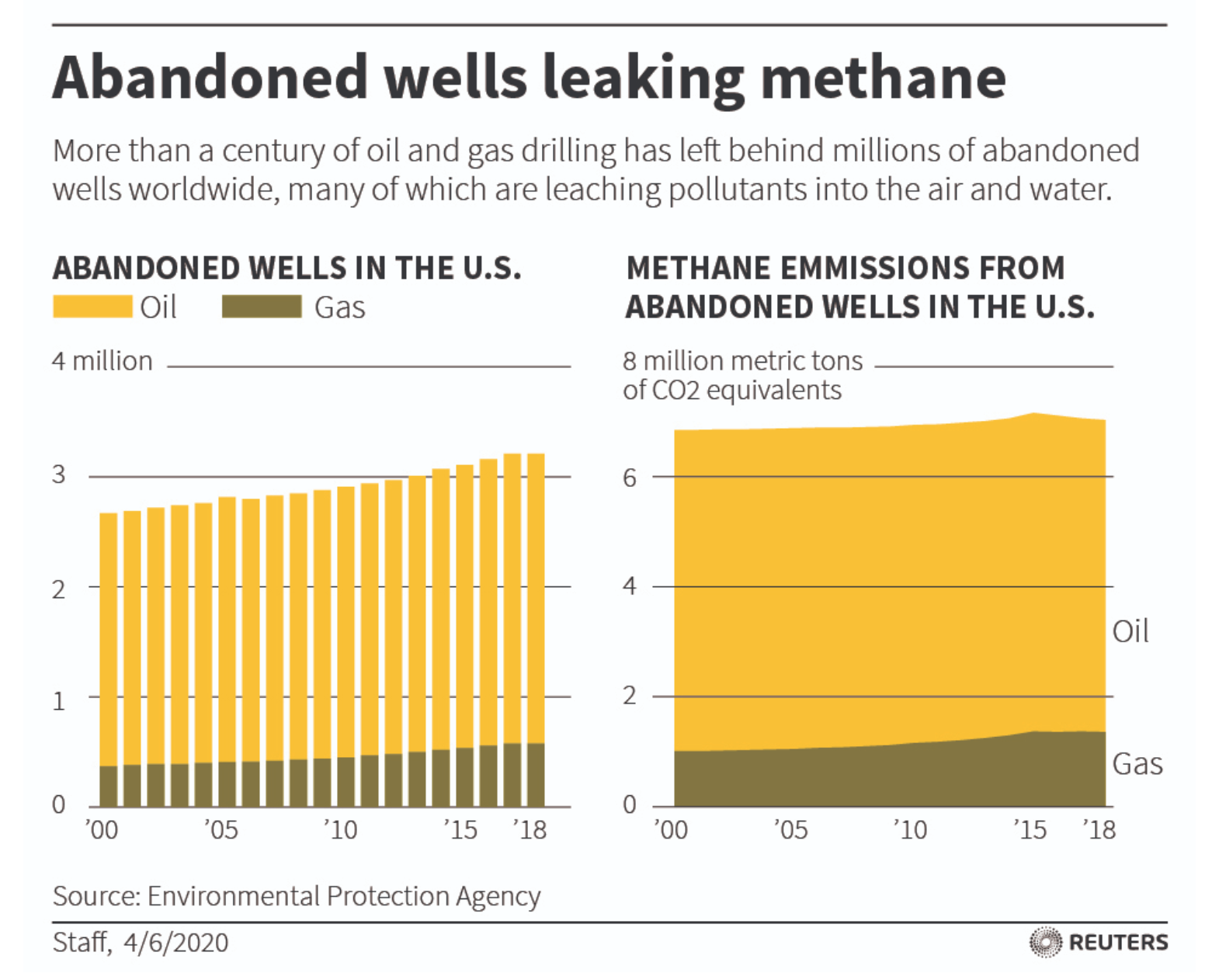 Leaking oil and gas wells also cause significant damage to the environment that may not be immediately noticeable or have any direct impacts. These wells emit a substantial amount of methane, a very potent greenhouse gas, contributing to climate change and further threatening the already fragile Californian water supply. Across the country in 2018 abandoned oil and gas wells alone emitted a combined total of 281 kilotons of methane, which is equivalent to burning 16.2 million barrels of crude oil in terms of climate damage. Climate change has already contributed to massive droughts and heat waves in the western United States. In California we know all too well how droughts and heat waves can spark devastating fires. While our front line firefighters extinguish them, precious water resources, severely limited by the aridification of the west, become more depleted. Inadequate action to transition away from fossil fuels and properly seal existing wells will exacerbate these issues and damage California’s public health and water security even further. 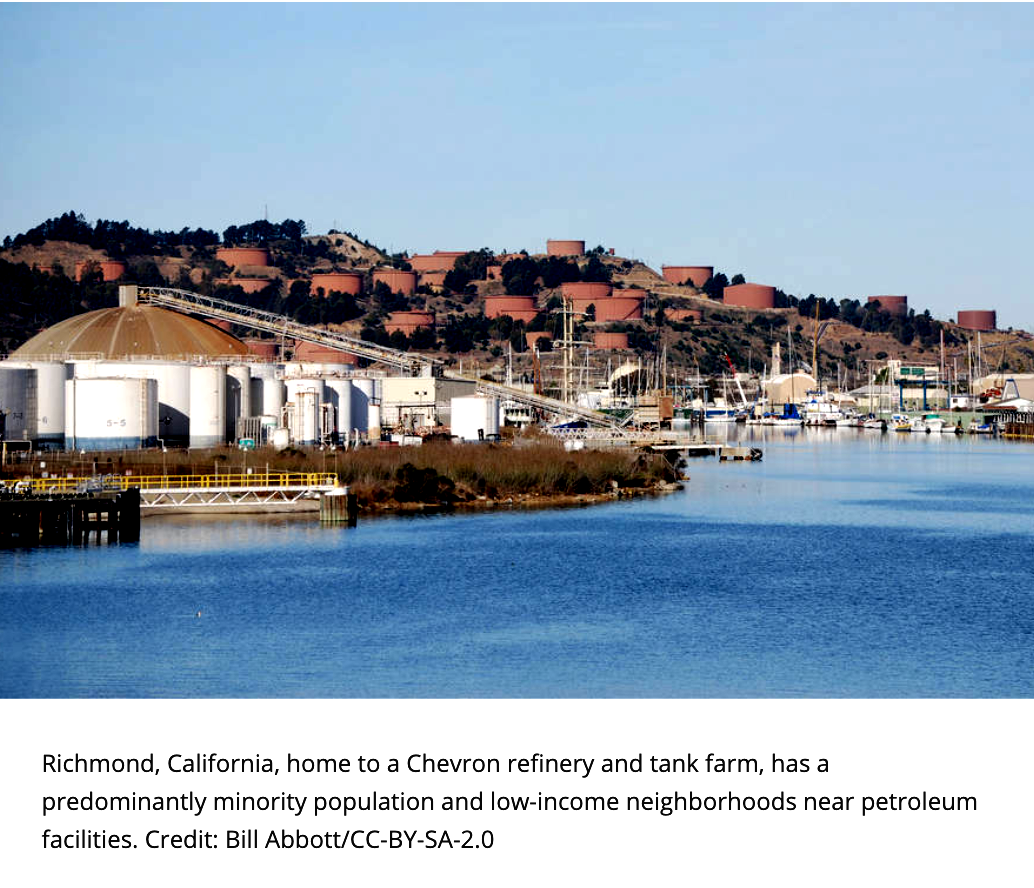 Not only do leaking oil and gas wells cause unspeakable damage to public health and the environment, but they are an economic disaster in the making. In California there are about 35,000 wells sitting idle with production suspended that are continuously leaking toxins into and poisoning their surrounding environment and insufficient funds or efforts to properly plug them. They continue to threaten the health of the public, yet are not contributing at all to the local economy. On July 15, California Resources Corporation (CRC), which has many idle wells across the state, filed for chapter 11 bankruptcy to seek relief from $5 billion in debt. This adds them to the list of 23 oil and gas companies in North America that have declared bankruptcy since January first of 2020 alone. As the profitability of oil and gas declines, it is expected that many more wells will be abandoned and more and more oil and gas companies will declare bankruptcy. With oil prices currently hovering around $40 per barrel companies can’t afford to pay off debts acquired when oil was at their peak. If their finances aren’t in order and they can’t properly plug wells, these corporations leave the state and its taxpayers to clean up the mess. “Bankruptcy proceedings like these are a threat to California because oil companies like CRC try to weaponize them to dump their environmental cleanup costs on the public.” said Kassie Siegel, an attorney at the Center for Biological Diversity. “Given the huge number of wells at stake, the Newsom administration has to intervene quickly to protect the public and our environment.” 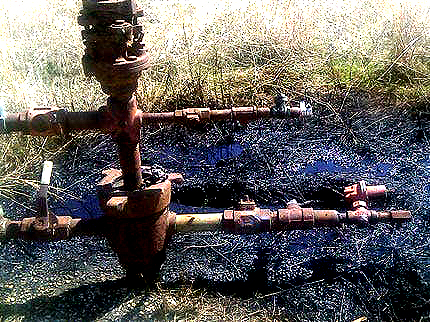 A leaky abandoned oil well. California law requires that fossil fuel companies post bonds to ensure that wells are properly plugged and remediated when nothing more can be taken from them, but these bonds are often massively inadequate. The bonds of California’s seven largest drilling companies, which control about 75 percent of existing wells, amount to approximately $230 for every well that needs to be decommissioned, plugged, and remediated, but the actual cost in California to ensure that this is done properly ranges from $40,000 to $152,000 depending on the location.  On July 1st a new law was put into effect that allows California Geologic Energy Management Division (CalGEM) to collect up to $30 million per oil and/or gas company to ensure there are sufficient financial resources available for plugging orphaned wells if their owners fold and lack the money to fulfill their cleanup obligation. However, this still may be insufficient and it seems likely that if there isn’t a more drastic change, when these companies inevitably shut their doors, the state and its taxpayers will be left with billions of dollars to pay to completely and safely decommission these wells. This places an even greater burden on those who are already suffering from the very existence of these wells. 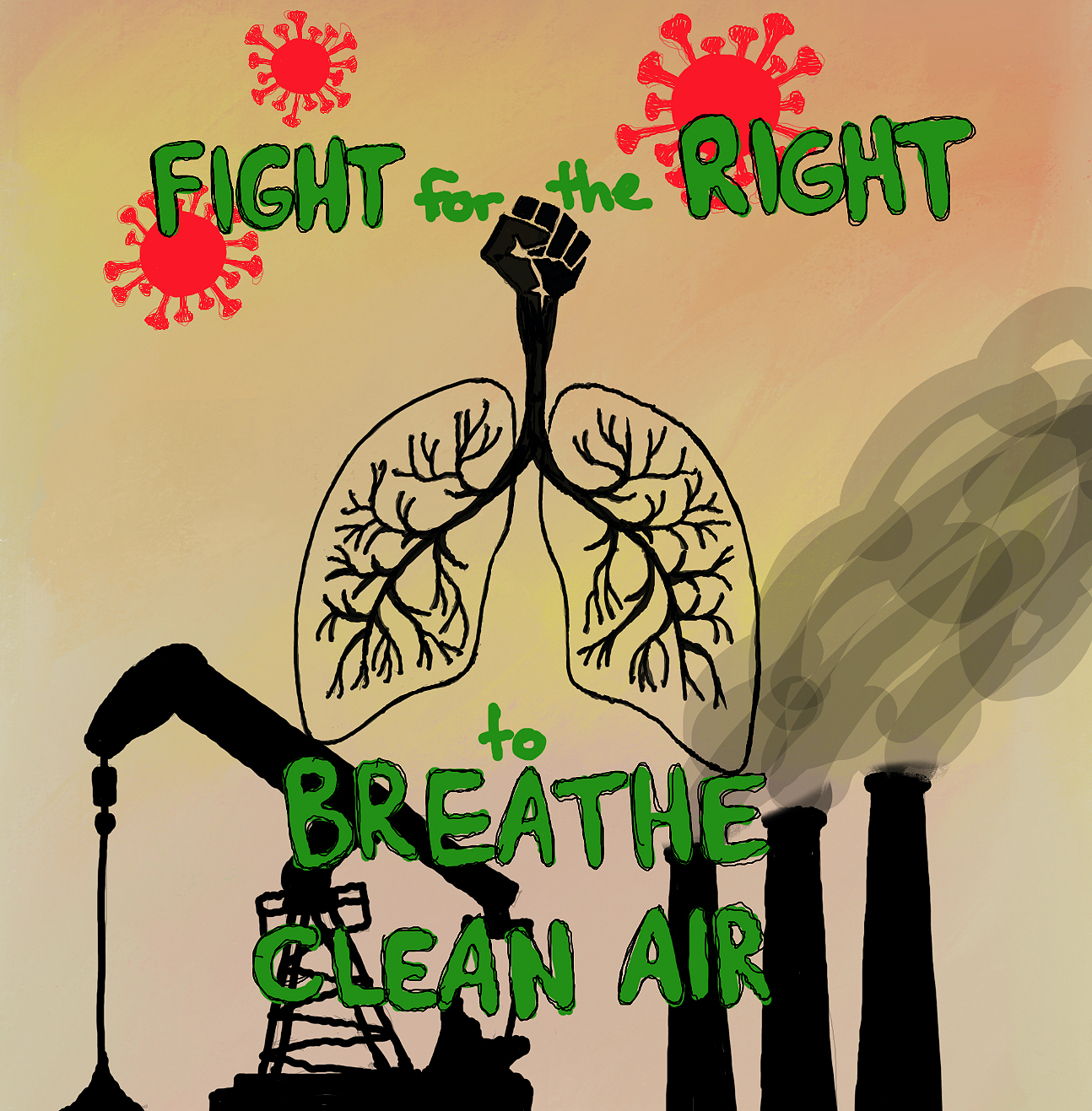 Left: Graphic by Elise Ferguson Elected officials from around the state want to know why the Californian government supports a dying industry that was already in turmoil even before the pandemic. Having started 2020 near $70 a barrel, oil plunged below $25 as storage tanks neared capacity and the price of U.S. oil futures even briefly sank below zero. In the past 12 months CRC’s share prices have plunged 92 percent and it is likely that other companies are on a similar downward trajectory. It seems that oil has lost its place in the market. It’s an unreliable source of energy and provides no economic stability, whereas clean, renewable energy sources are financially consistent and are not toxic to public health.  “Even though the air quality and seismic risks are well known, the failing fossil fuel industry that is driving catastrophic climate change, continues to ask for a bailout with our public money,” said Meghan Sahli-Wells Co-Chair of Elected Officials to Protect California, former Culver City Mayor, and current council member. “No more public funding should go to this failing industry. It’s time to prioritize the health and wellbeing of all Californians and rid our state of these toxic wells.” In a world plagued by uncertainty and colliding crises, should the floundering fossil fuel industry be left untouched? 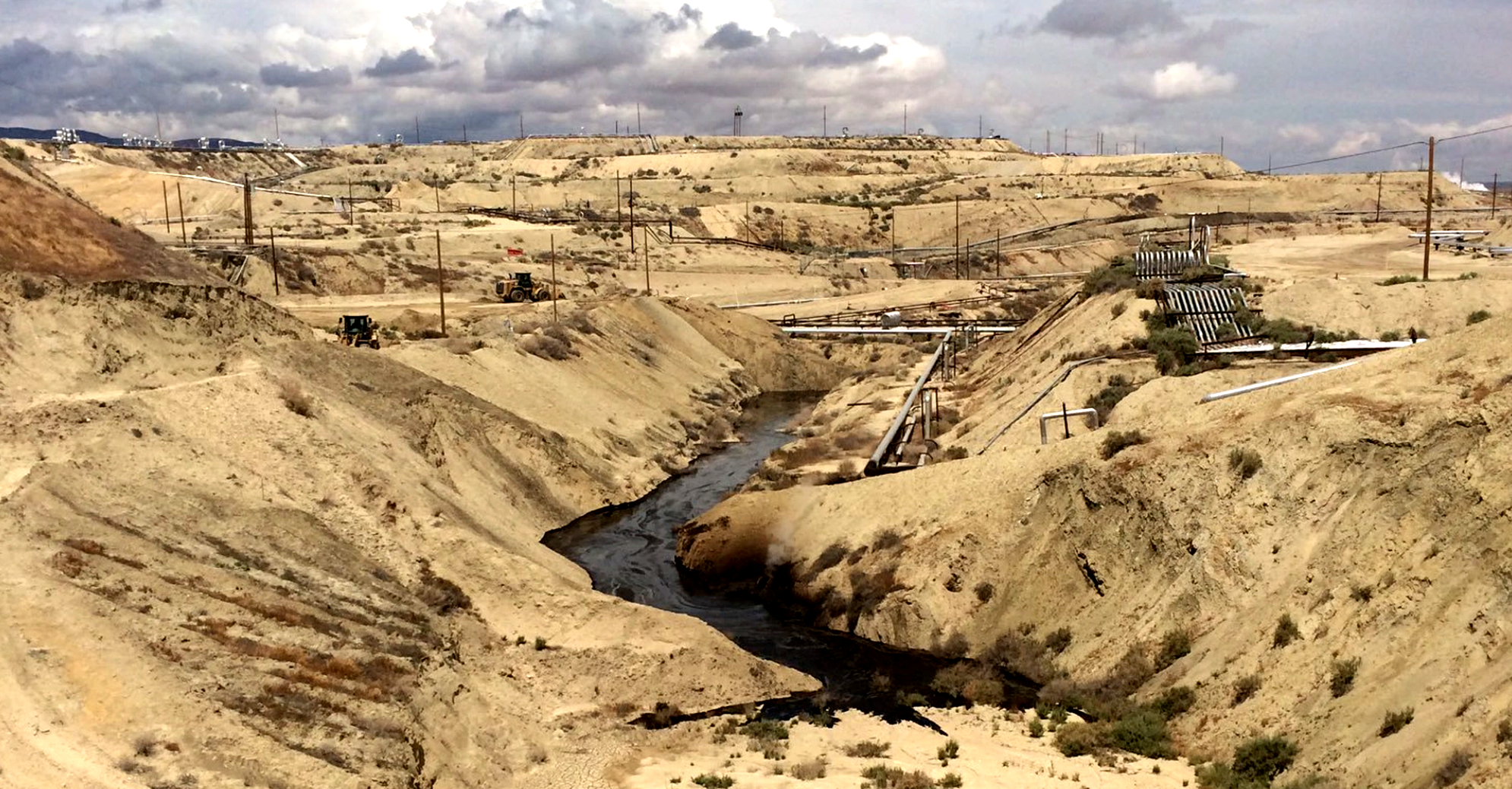 Oil flows at a Chevron oil field in Kern County in this photo tweeted May 13, 2019, by the California Department of Fish and Wildlife’s Office of Spill Prevention and Response.

https://protectearth.news/leaking-fossil-f...
Add Your Comments
Support Independent Media
We are 100% volunteer and depend on your participation to sustain our efforts!