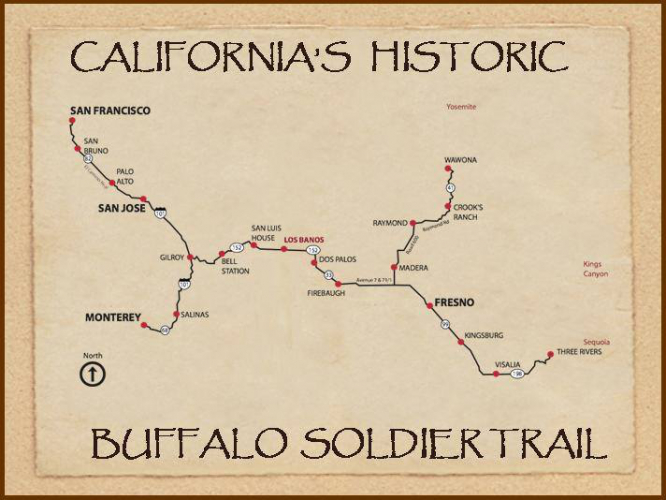 During an amazing gathering of nationwide leadership apart of the 2019 Veterans Day dedication of the Colonel Charles Young Memorial Highway, along Highway 198, Three Rivers, California, a US Congressional Buffalo Soldiers Study was released to the public, soon many may read the findings and favor agreement with allocation of resources toward a positive new way forward.

Globally, a “hidden secret” is an accurate description of the profound contributions of California Buffalo Soldiers of the 9th Cavalry, specifically those in Troop L, who stood out as early Park Rangers because of their leader.

Unlike other Buffalo Soldiers who were in regiments led by white officers, Troop L of the 9th Cavalry was commanded by Captain Charles Young, the highest ranking Black officer in the U.S. Army at the time.

Garrisoned at the Presidio of San Francisco, Young rode with his men to the Sierra Nevada for the summer, where they were stationed, undertaking significant construction park projects.

Under the leadership of Captain Young, Buffalo Soldiers constructed new infrastructure, including the wagon road leading into the Sequoia’s Giant Forest, the trail to the top of Mount Whitney, and the arboretum in Yosemite.

Showcasing diplomacy and sensitivity the Buffalo Soldier patrolled local businesses in the surrounding areas, keeping poachers at bay, while planting seeds of conservation practices that survive today. In addition to Yosemite, Sequoia and General Grant Parks, the Buffalo Soldiers also served as rangers in Hawaii and Glacier National Parks.

In 1903, Young was named acting superintendent of Sequoia National Park, the first African American to hold that position.
The contributions that Young and the Buffalo Soldiers made in the development of the national parks had a profound impact.

Captain Young, a lover of ecology, music and nature, made suggestions to the Secretary of Interior on preserving vegetation and stopping erosion, says Brian Shellum.

The very presence of Young and the 9th Cavalry protecting the sacred terrain in California helped to diffuse some of the racist perceptions that many whites held at that time.

In 1903, when President Theodore Roosevelt traveled to US Army Headquarters at the San Francisco Presidio to dedicate the Admiral Dewey Monument featuring Nike, the Greek Goddess of Victory holding a trident spear high atop the center of Union Square, the heart of the San Francisco upscale boutiques and fine dining.

Our “hidden figures” of California Pan African Heritage is punctuated by the unknown Presidential dedication of the Dewey Statue in Union Square and visit to Yosemite National Park where the 9th Cavalry served as his escort, a historic honor for Captain Young and his men.

The parallel “unknown existence” of the African Methodist Episcopal Zion Church, the Freedom Church at Union Square mirrors the “hidden history” of Sequoia National Park Buffalo Soldiers Day, it seems one day is far too much and daily recognition remains beyond cognition in 2020 America for far too many.

Ada Mills Young and Captain Young instilled in their extended family a profound golden legacy, “He always held himself to a much higher standard than anybody else,” says author Brian Shellum. “He always knew that in order to be successful in the Army, he had to walk this color line. And he always had to be much better than any other officer, in order to gain some measure of acceptance.” Our legacy continues…