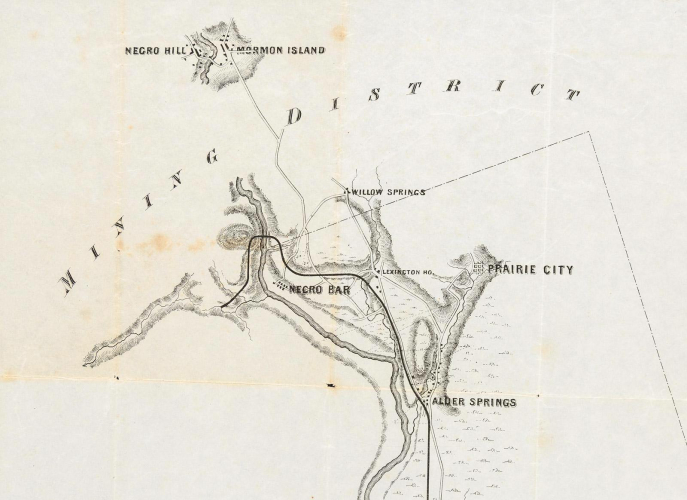 Historic Folsom District
"From Slavery to Freedom" by Dr. John Hope Franklin remains the definitive text to obtain a wholistic broad view of our pending National Juneteenth Holiday, pops I remember and we will make it plain.

In the mid 15th century the Roman Catholic Church issued Papal Bulls that were believed to justify the expansion of Pan African enslavement within early Iberian Penisula colonies.

Military expeditions captured Pan Africans and military territory under religious decree that provided a legal framework towards the War of Castillian Succession.

Castillian Queen of Spain later hired Italian Maritime Merchant Christopher Columbus near the end of the 15th Century to expand trade and commerce. The historic symbolic statue in the California State Capitol Rotunda was removed Summer 2020 and soon come the rest of the story.

Perhaps the better known August 1619 shipment of military prisoners of war, captured in the Kingdom of Kongo in West Central Africa shares the King James Version in scripture.

Kongo’s Christian ruler used diplomatic pressure based on religious status to try and limit the Portuguese slave trade, it did not work well, Genesis 15:12-14 shares an English version of the same journey "From Slavery to Freedom" valued in original British colonies who became independent.

The close of the US Civil War is the new beginning of our Juneteenth story.

US Army General Gordon Granger was given the assignment to command the Department of Texas, from the final fallen Confederate Port of Galveston Island, he had no idea that, in establishing the Union Army's Headquarters in Texas, he was also establishing what has become an agreed basis for our National Juneteenth Holiday.

After the very global public execution of an unarmed Black man, 2020 Memorial Day, our popular annual freedom celebration of Juneteenth has taken on unbelievable global significance.

When General Granger assumed command of the Department of Texas, the Confederate capitol in Richmond had fallen; the "Executive" to whom he referred, President Lincoln, was dead; and the 13th Amendment abolishing slavery was well on a path of ratification.

Confederate Troops and Confederate President Jefferson continued on the battlefield refusing to surrender or accept the ending of chattel slavery in the Confederate States of America.

Over 200,000 US Colored Troops had enlisted in the Army and Navy to secure the Union and obtain freedom through blood on the battlefield.

General Robert E. Lee had surrendered in Virginia, April
1865, the Army of the Trans-Mississippi had held out until late May, and even with its formal surrender on June 2, a number of Rebels in the region continued bushwhacking, plunder and mayhem.

When the 7 week campaign throughout Texas was complete, General Granger now famous order No. 3, was enforced and well over 250,000 formerly enslaved Pan Africans had one final King Cotton crop in the field.

On Texas plantations, "masters" had to decide when and how to announce the news -- or wait for US Colored Troops to arrive enforcing freedom.

Our "hidden figures" are found in the text of "Juneteenth: Emancipation and Memory," and in "Lone Star Pasts: Memory and History in Texas" the National story begins to open up the hidden story few want to recognize or acknowledge.

Another voice, told to Hayes Turner, a former enslave woman named Katie Darling continued working for her mistress another six years (She " 'whip me after the war jist like she did 'fore,' " Darling said).

The fullness of our National Juneteenth story is all the more remarkable and inspiring when the pre-Civil War and post-Civil War period is considered in context transforming a Nation, June 19, 1865 is our own annual rite, "Juneteenth, celebrating our journey from Slavery to Freedom with the promise of a new beginning, globally.

There were other available anniversaries dates for celebrating freedom that were considered and were not utilized, including:

Jan. 1: the day President Lincoln signed the Civil War executive order in 1863, for states on rebellion.

Jan. 31: the date the 13th Amendment passed Congress in 1865, officially abolishing the institution of slavery, unless convicted of a crime.

Dec. 6: the day the 13th Amendment was ratified that year

No one in the post-Civil War generation could deny that something fundamental had changed as a result of Lincoln's war measure, but enforcing it was a separate matter settled on the battlefields across America.

America's Peculiar Institution and ongoing challenges continue to impact the entire United States of America and our National Juneteenth Holiday will help heal the wounds.

It is quite possible that Juneteenth would have vanished from the calendar (at least outside of Texas) had it not been for another remarkable turn of events during the same civil rights movement that had exposed many of the country's shortcomings about race relations. The US Civil Rigjts movement suffered a major blow in Memphis, Tennessee.

Rev. Dr. Martin Luther King Jr. had been planning a return to the site of his famous "I Have a Dream" speech in Washington, this time to lead a Poor People's March, sharing his "current nightmare."

Following his assassination "by committee" was left to try leading a nationwide spiritual effort toward freedom and equality.

In 1979, Texas became the first state to make Juneteenth an official holiday. Leading the charge was Rep. Al Edwards of Houston, often referred to as "the father of the Juneteenth holiday," who framed it as a "source of strength" for young people, according to Hayes Turner.

Since then, 47 other states and the District of Columbia have recognized Juneteenth as a state holiday or holiday observance, the US Senate was one vote short of Unanimous Consent to establish a National Juneteenth Holiday earlier this year.

"This is similar to what God instructed Joshua to do as he led the Israelites into the Promised Land," Al Edwards shared in 2007. "A national celebration of Juneteenth, state by state, serves a similar purpose for us. Every year we must remind successive generations that this event triggered a series of events that one by one defines the challenges and responsibilities of successive generations. That's why we need this holiday."

You can follow Edwards' efforts and others' worldwide at juneteenth.com, founded in 1997 by Clifford Robinson of New Orleans. Another organization, the National Juneteenth Observance Foundation, founded and chaired by the Rev. Ronald Meyers, is committed to making Juneteenth a national holiday on a par with Flag and Patriot days. "We may have gotten there in different ways and at different times," Meyers told Time magazine, "but you can't really celebrate freedom in America by just going with the Fourth of July."

Juneteenth is an opportunity to remember our journey towards freedom, to celebrate today, but also to speak out against what remains to be done.

Globally, Juneteenth is poised to exceed the imagination of our elders and ancestors to light the path for future generations.

The business conversation and culinary excellence on full display at our Juneteenth Food and Wine Symposium, September 18, 2020, Historic Gold Mining Town of Negro Bar, California will help set the tone for our National Juneteenth Directors and Planners events to spark the imagination to explore the vast global possibilities for the next generations to come.
Added to the calendar on Mon, Aug 10, 2020 9:37PM
Add Your Comments
Support Independent Media
We are 100% volunteer and depend on your participation to sustain our efforts!