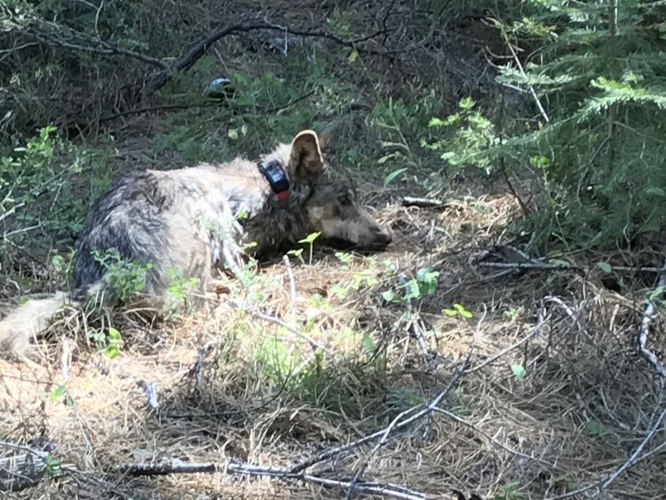 
The Lassen Pack has had a fourth consecutive litter of pups. California’s only known gray wolf family welcomes a minimum of eight new pups this year. Genetic testing revealed there were at least four males and two females.

A new breeding male replaces OR-7’s son, who has not been documented since the spring of last year. The newcomer is a black wolf who was first seen with the pack last summer. His origin is currently unknown, however he is unrelated to any other known California wolves.

Two of the Lassen Pack members have been fitted with radio collars: LAS01F, the packs alpha female; and a yearling male, LAS03M. In September of 2019 a female pup was captured and collared, however the collar did not remain functional. There are no other wolves in the state being tracked with GPS.

The pack now consists of a minimum of six adults and yearlings, which brings the pack to at least fourteen wolves. Not including this year, the past three litters combined totaled thirteen pups, though not all survived. While it could be assumed that at least some of these animals may be dispersing throughout the state, there is no known documentation as to their whereabouts.

California gray wolves are currently protected under both the state and federal Endangered Species Act. However, this administration has proposed to end federal protections and remove the gray wolf from the endangered species list. A decision by the US Fish and Wildlife Service is expected this year and will be met with great opposition should the decision be unfavorable to wolves.

Wolf Pup Video
https://wildcalifornia.org/blog/publicland...
Add Your Comments
Support Independent Media
We are 100% volunteer and depend on your participation to sustain our efforts!