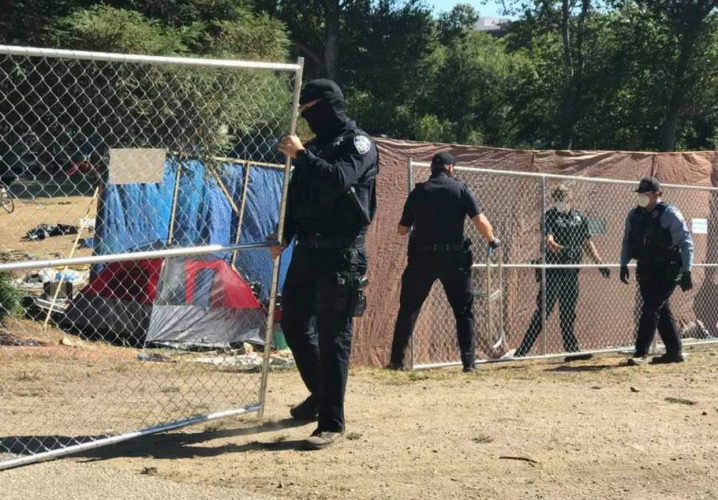 Join us at the Defund the Police - ReFund the Community March from the Clock Tower to City Hall this Tuesday at 6 PM to protest the cruel city organized campaign against those who live outside. The Community Advisory Committee on Homelessness (CACH) Co-Chair and City staff will present their report that plans to do little other than criminalize the unhoused and continue to take people's vehicular homes is on the agenda as are negotiations to increase the budget of the police.

The CACH committee was formed during the meeting to evict more than 200 unhoused people from behind Ross into the doorways and parks of Santa Cruz. Input from the homeless community into this report was not possible as the meetings were scheduled when people who live outside were not able to participate. One of the few CACH members who was homeless was kicked out of the River Street Camp because he was late as a result of attending the CACH meeting. The camp was set up in preparation for the Ross Camp eviction.

Susie O'Hara, Assistant to the City Manager, lied to a Federal Judge claiming that everyone at the Ross Camp would get shelter or housing knowing that was not true. She will be giving the report Tuesday night. The City Council report on homelessness issued in 2017 claimed the police spent over $14 million to arrest and torment the homeless.

The city just made a sweep of the Benchlands driving at least 100 people into the parks and doorways. The CDC guidelines say that sweeps of homeless camps are a danger to the community. The city is also ticketing and towing vehicular homes at a stunning rate as thousands of more people are facing homelessness in our county.
https://www.facebook.com/events/9843590619...
Add Your Comments
Support Independent Media
We are 100% volunteer and depend on your participation to sustain our efforts!