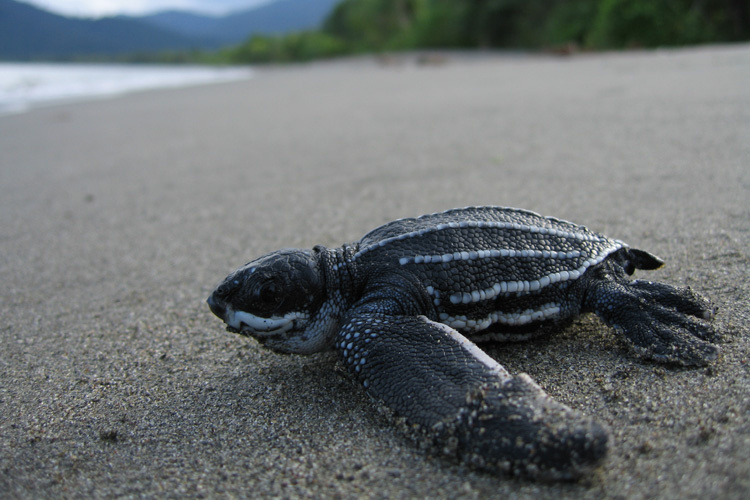 If trends continue, the review found, U.S. leatherback sea turtles in the Atlantic will decline by half within 30 years. Pacific annual nest counts at the two most important beaches (Jamursba-Medi and Wermon, both in Indonesia) declined annually by 5.7% and 2.3% respectively in the most recent monitoring period.

“Giant leatherback sea turtles won’t make it into the next century unless we help them now,” said Catherine Kilduff, an attorney at the Center for Biological Diversity. “This announcement shows we’re not doing enough to save leatherback sea turtles or protect their habitat. To save these magnificent creatures, we have to confront the problems they face, from climate change and plastic pollution to lethal entanglement in fishing nets.”

Today’s announcement confirmed that seven distinct populations of leatherback sea turtles exist around the world, and all meet the definition for endangered species. The species is already listed as endangered throughout its range under the Endangered Species Act. The Services did not propose changes to the existing global listing.

Fishing gear remains the primary threat to leatherback sea turtles. The vast majority of deaths occur outside of U.S. waters, in gillnet fisheries off the nesting beaches in Trinidad.

Leatherback entanglements off the U.S. East Coast are regular occurrences. A recent video of U.S. marine authorities freeing an entangled leatherback shows how difficult rescues can be. Estimates indicate that approximately 622,000 vertical lines are deployed from fishing gear in U.S. waters from Georgia to the Gulf of Maine. There are currently no mitigation measures to prevent leatherback entanglements in vertical fishing lines in the Atlantic.

The Center has brought two recent lawsuits to protect leatherback sea turtles off California. The Center won its challenge to federal longline fishing permits issued for vessels off the U.S. West Coast in 2019. It sued the state wildlife department in 2017 for failing to prevent the commercial Dungeness crab fishery from entangling and killing endangered whales and leatherback sea turtles. In 2019 California officials agreed to evaluate the risk of leatherback sea turtle entanglement when deciding whether to open and close the fishery.