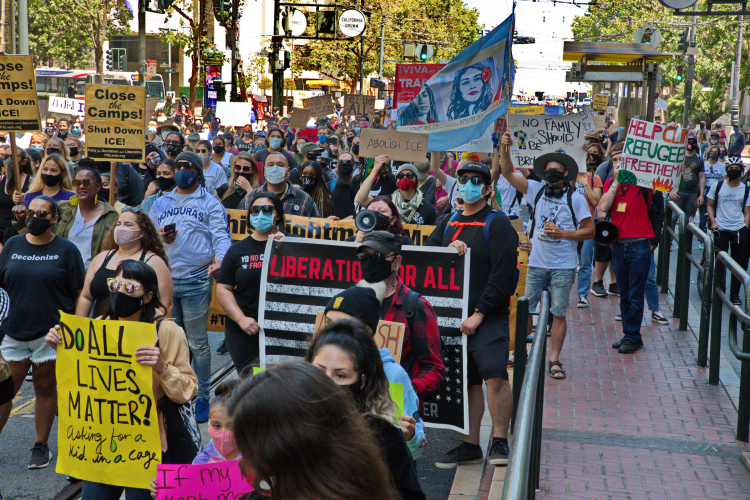 Californians' outrage at ICE "detention” centers is not letting up. On Saturday at noon, a large crowd of demonstrators held a rally in San Francisco's Justin Herman Plaza and then marched to the ICE building at 630 Sansome Street. They demanded that Gov. Newsom and AG Becerra immediately end all California cooperation with ICE.

The march, joined by a caravan of low riders from the Mission, marched down market street and then over to ICE headquarters on Sansome. They flew many large banners and signs and carried a large effigy of Governor Newsom holding a key.

At the ICE building, “Free Them All” was painted on the street and, in an unmistakable message, many red “bloody” hands were imprinted on the building’s entrance and walls. A second rally with additional speakers was then held from a large sound truck.

The event was well organized, with free water and food and with medical people distributing hand sanitizers.

1. Stop all transfers from California prisons and jails to ICE detention

2. Stop all expansion of detention centers in our state

3. Lead an independent investigation and hold detention centers acountable for putting lives at risk during the pandemic.

At the federal level, they are also fighting to Abolish ICE, Close the Camps and #FreeThemAll.

ICE must release all detained people, starting with the most vulnerable to COVID. While decarceration takes place, ICE and private prison corporations must provide safe [housing], protective gear, and medical attention.

Their call for statewide action stated:

In cities around the country and around the world, tens of thousands of people are pouring into the streets demanding an end to the White Supremacy that has led armed agents of the state to murder members of the African-American community with impunity. We stand with that movement which is calling for defunding and disbanding the brutal police state, and to assert that #BlackLivesMatter.

The mechanisms built to target, detain, and deport immigrants are rooted in, and function in collaboration with the systems of anti-Black racism and white supremacy, which have existed in the United States since before its founding. In California, Immigration and Customs Enforcement (ICE) locks up thousands of immigrants who are a vital part of our communities in a series of detention centers or concentration camps. Many Black immigrants who are disproportionately targeted and criminalized are also detained, a fact that for too long has gone ignored. For instance, 37 year-old Cameroonian refugee Nebane Abienwi died on October 1st 2019 while in ICE custody at the Otay Mesa Detention Center in San Diego.

Migrants continue to face severe medical neglect, and by design, social distancing is impossible in any form of incarceration. As a result of this negligence, a serious outbreak of COVID-19 has devastated the Otay Mesa Detention Center, leading to the death of 57-year-old Carlos Escobar Mejia. When a dozen detainees went on a hunger strike to protest the conditions, they were even tear-gassed by guards. OMDC officials then cut-off outside communication as punishment. 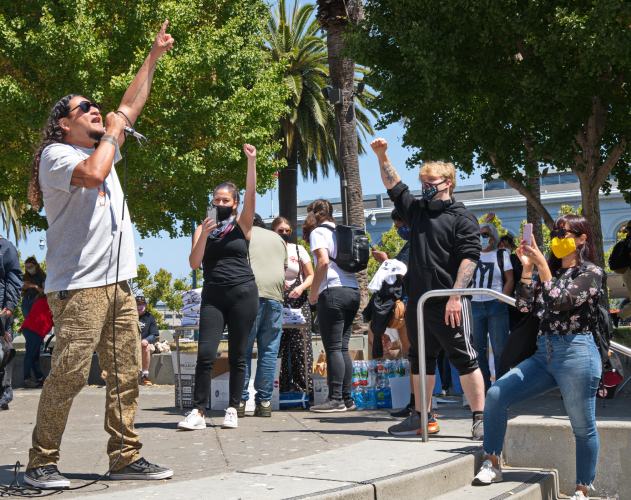 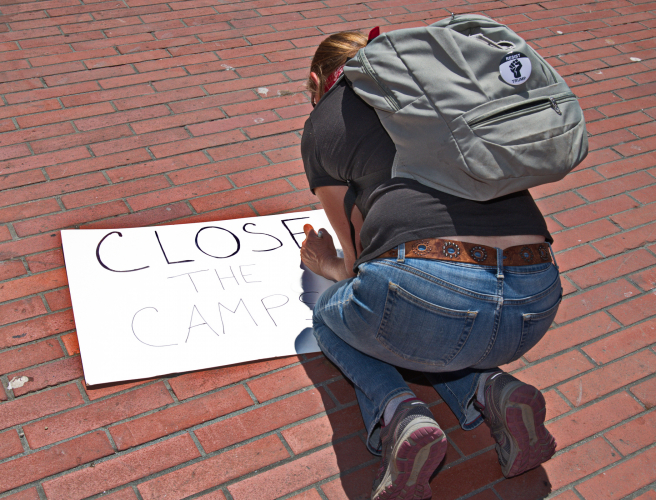 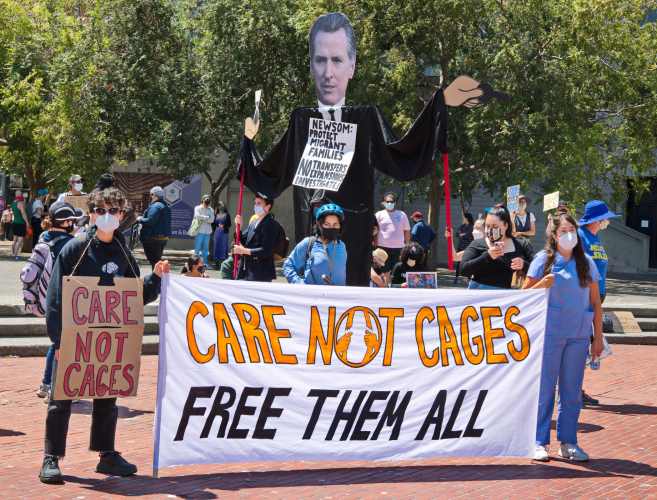 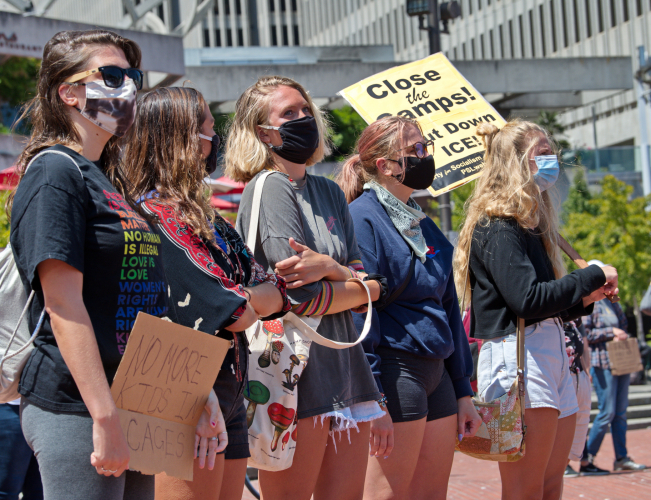 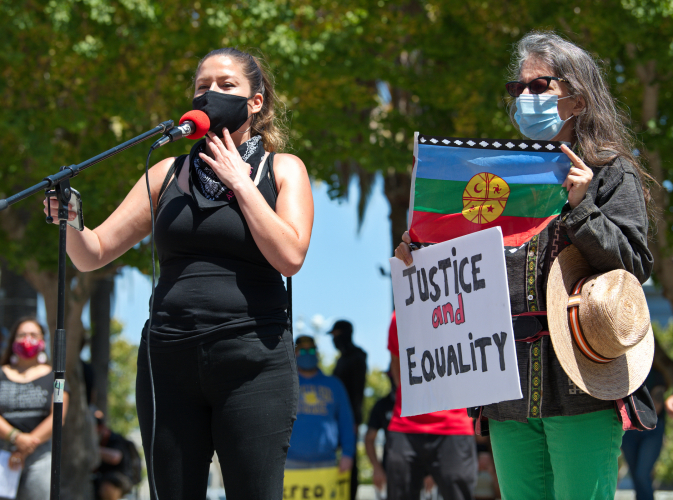 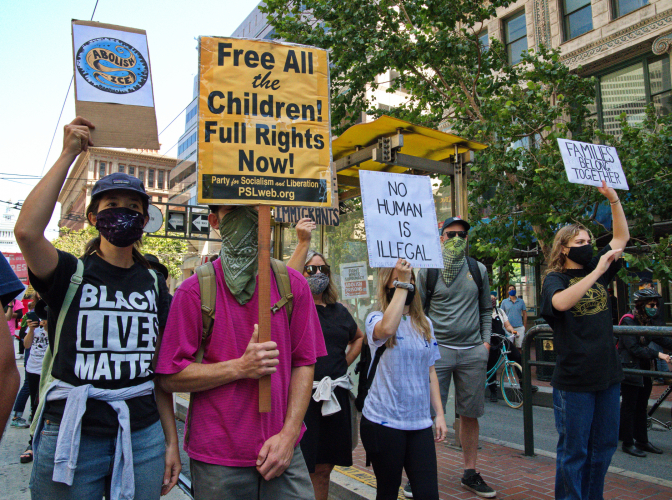 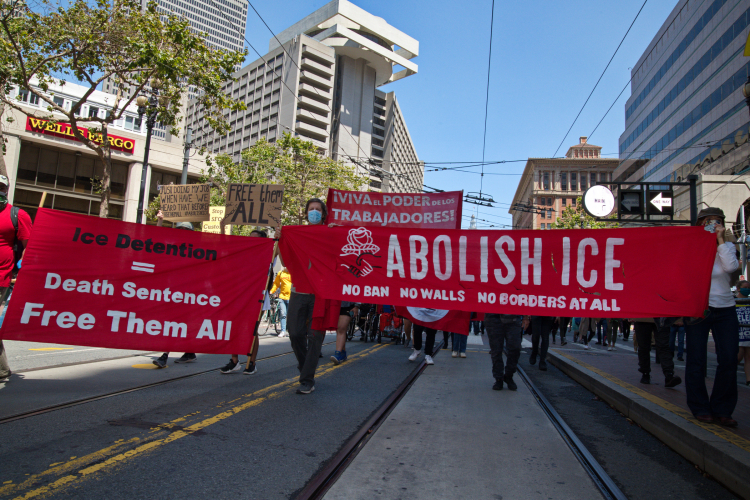 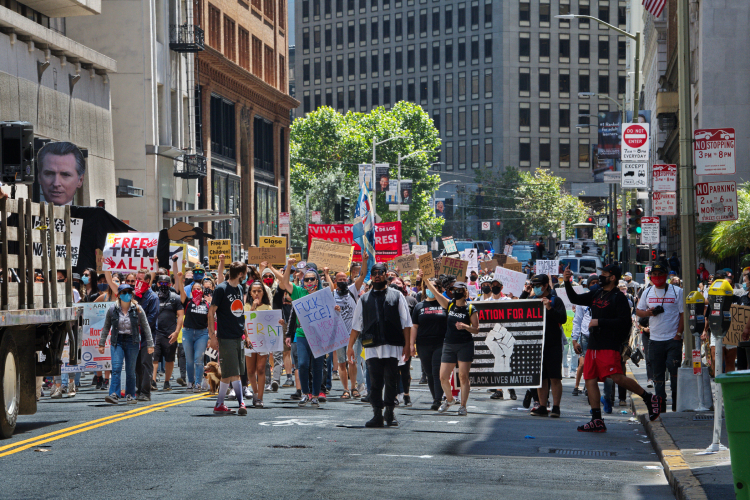 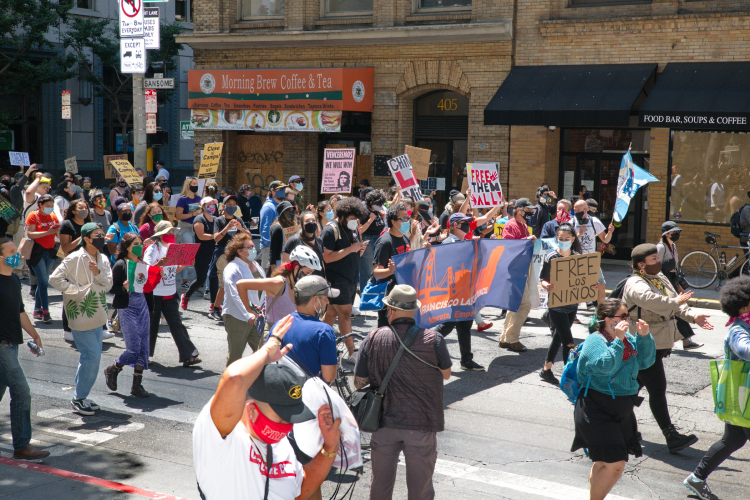 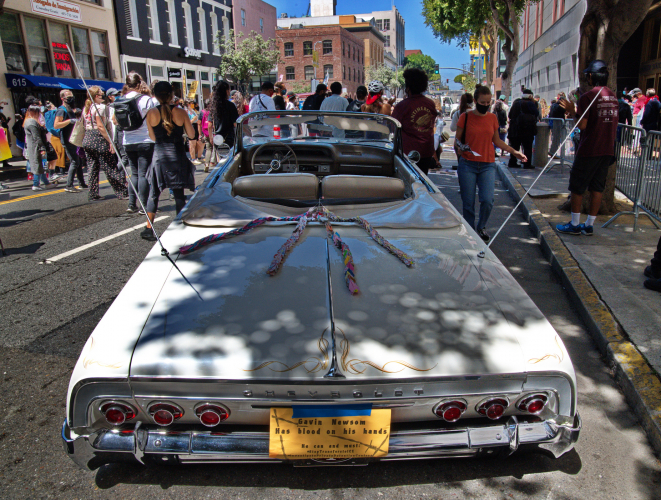 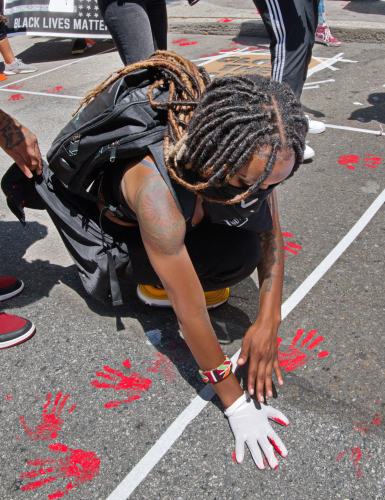 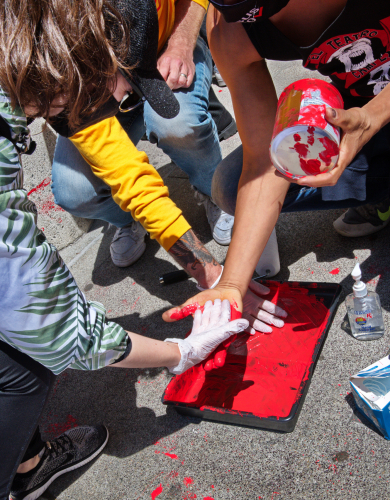 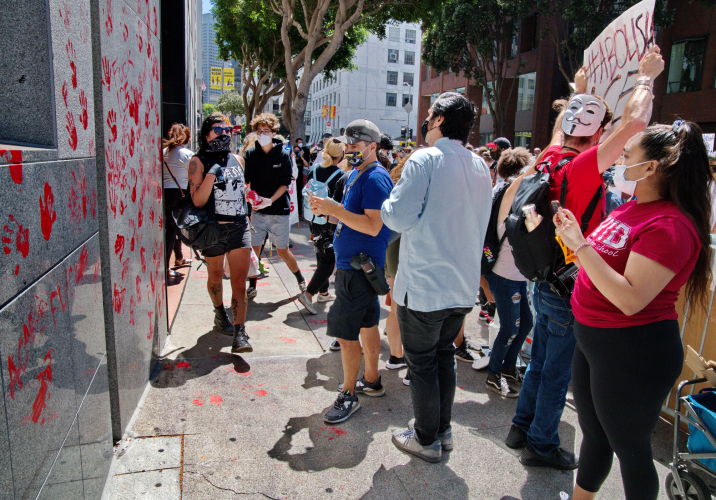 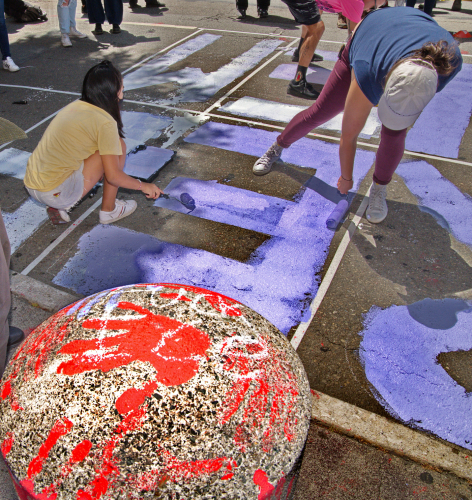 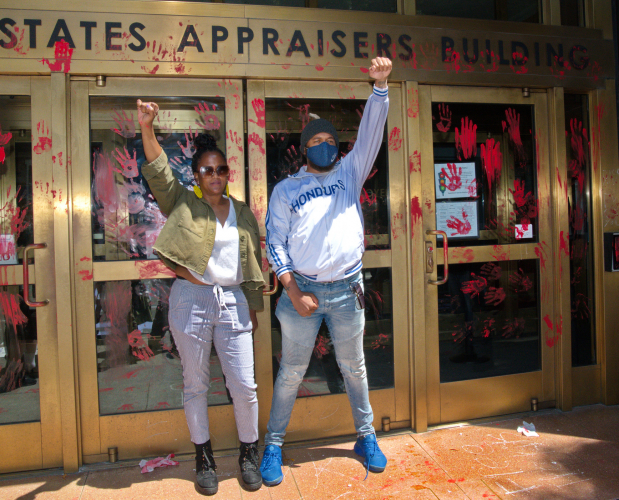 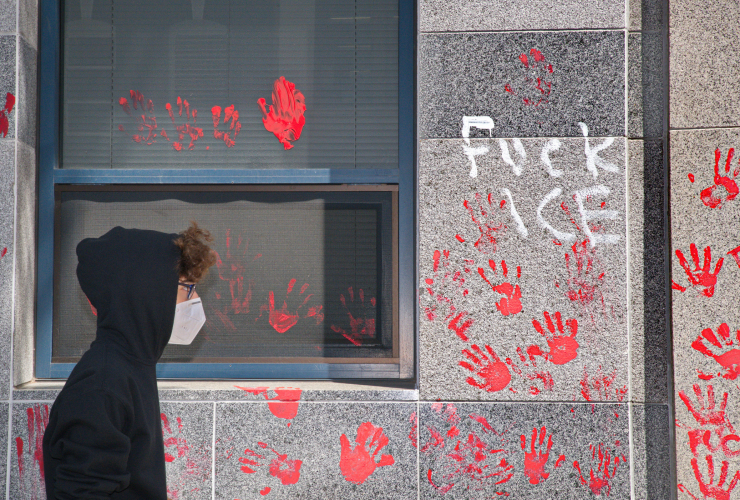 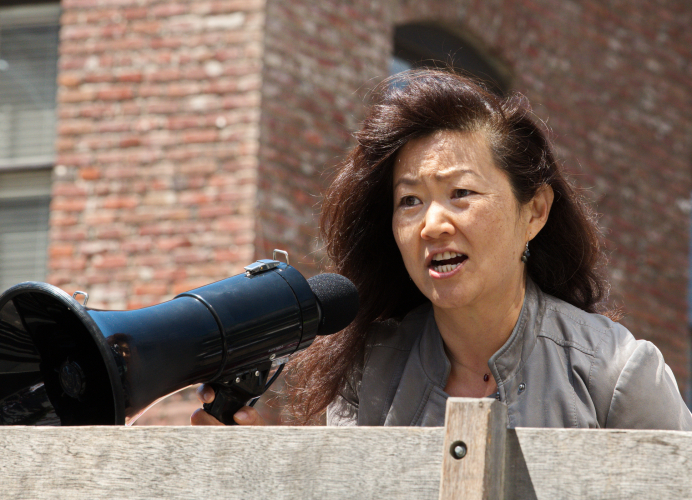 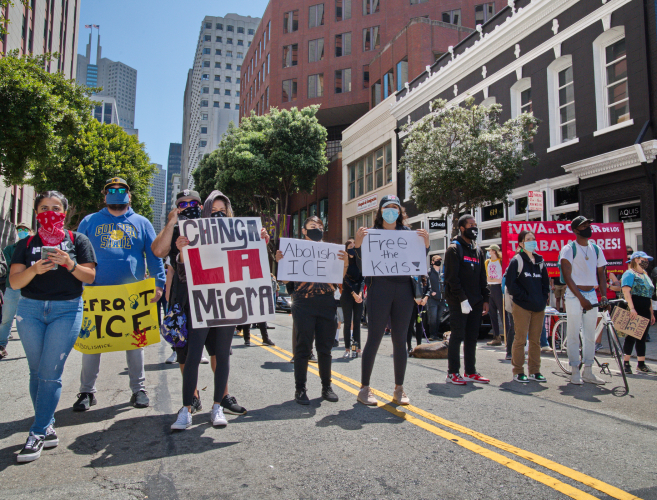 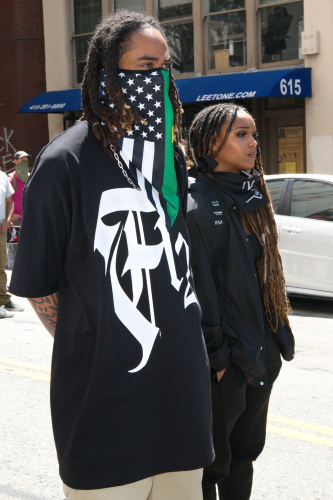 original image (1400x2101)
Add Your Comments
Support Independent Media
We are 100% volunteer and depend on your participation to sustain our efforts!