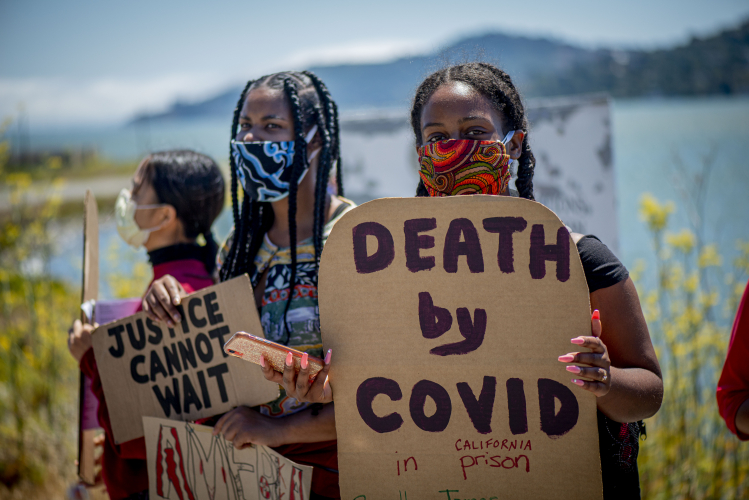 As prisons and jails across the country continue to report Covid-19 outbreaks among inmates and staff, the U.S. Supreme Court ruled late Wednesday that a county jail in California does not have to provide its population with basic sanitary and protective equipment or test symptomatic inmates.

Responding to an emergency application by officials at Orange County Jail, the court handed down a 5-4 ruling along partisan lines and issued a temporary stay on an earlier ruling by federal Judge Jesus Bernal.

After the ACLU and several detainees filed a complaint that the jail was not providing safe conditions for its population of 3,000 people, Bernal issued an injunction in May requiring Orange County Sheriff Don Barnes to implement social distancing, test inmates if they showed symptoms, and provide disinfecting supplies—requirements which Barnes and other jail officials said amounted to "micromanaging" of the facility's daily operations.

University of Washington political science professor Scott Lemieux noted that the conservative justices issued their "absolutely indefensible" ruling while working from home "because it's not safe from them to go into work."

The only principle behind the decision, Lemieux said, "is the belief of the Republican appointees to the Court that prisoners are subhuman and extraordinary measures need to be taken to expose as many of them to a deadly virus as possible."

By issuing the stay on the injunction, Justice Sonia Sotomayor wrote in her dissent, the Supreme Court's conservative justices allowed the jail to continue failing "to safeguard the health of the inmates in its care."

"Inmates described being transported back and forth to the jail in crammed buses, socializing in day rooms with no space to distance physically, lining up next to each other to wait for the phone, sleeping in bunk beds two to three feet apart, and even being ordered to stand closer than six feet apart when inmates tried to socially distance," Sotomayor wrote in the dissent, which was also signed by Justice Ruth Bader Ginsburg.

According to the plaintiffs in the original case, the judge wrote, the jail misrepresented its efforts to take safety precautions to Bernal's district court. Officials argued that they had released about half of the jail population, but according to court filings, more than 300 people in the facility nevertheless tested positive for Covid-19 in May.

"The release of even a large number of inmates does not absolve the jail of its responsibility for the health and safety of the roughly 3,000 individuals left behind," Sotomayor wrote.

The ACLU argued on inmates' behalf that jail officials "provided watered-down disinfectant and make-shift masks made from blood-stained sheets; and symptomatic detainees were being denied tests."

The Supreme Court's ruling came as the Arizona Department of Corrections revealed one of the state's prisons had detected 517 cases of the coronavirus—nearly half the facility's population.

The death toll from the disease at San Quentin State Prison in California hit 22 on Tuesday, making the facility's outbreak the deadliest in the state.

The Marshall Project, which has been keeping track of Covid-19 cases in prisons since the pandemic began in March, reported last week that more than 78,000 inmates in the U.S. have tested positive for the coronavirus so far, representing an 11% increase from the previous week.

Rep. Ayanna Pressley (D-Mass.) on Wednesday responded to mounting reports of coronavirus outbreaks in detention centers by calling on her colleagues to pass legislation that would release eligible incarcerated people during the pandemic and for one year after, as a matter of public health.

"Now more than ever, it's critical we move to rapidly dismantle the carceral state," Pressley tweeted. "Every human being has the right to dignity and safety."
https://www.commondreams.org/news/2020/08/...
Add Your Comments
Support Independent Media
We are 100% volunteer and depend on your participation to sustain our efforts!