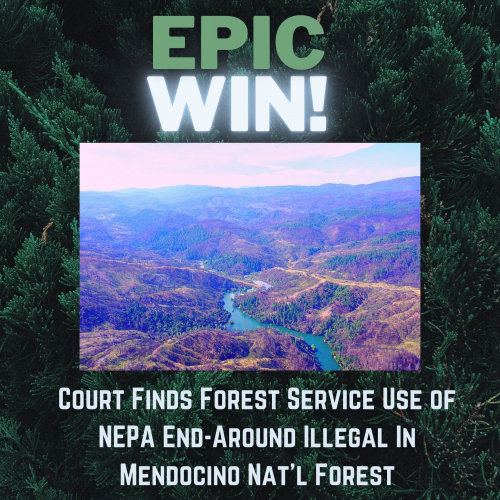 San Francisco, ​​Calif. ​—​ In a major victory, the Ninth Circuit Court of Appeals has sided with the Environmental Protection Information Center (EPIC) in a case impacting fragile post-fire forest in the Mendocino National Forest. In an August 3 ruling, the court found that the Forest Service’s use of a “categorical exclusion” to avoid an environmental impact assessment for a timber sale following the 2018 Ranch Fire was likely a violation of the law and that EPIC should have been awarded an injunction by the lower court to stop logging. The Ninth Circuit’s decision is available below.

“The Mendocino National Forest attempted to skirt the National Environmental Policy Act to fast track logging after the 2018 Ranch Fire, despite the many important and significant potential impacts to the environment,” said Tom Wheeler, Executive Director of EPIC. “Today’s ruling is an affirmation of NEPA’s [National Environmental Policy Act] central purpose: a careful study of the potential environmental impacts and the inclusion of the democratization of federal land management by providing the public an opportunity to engage with the Forest Service.”

EPIC challenged this project and sought an injunction to ongoing timber operations. The Northern District of California denied EPIC’s injunction and EPIC appealed (with an oral argument by Zoom and livestreamed to ​YouTube​) to the Ninth Circuit. Ultimately, the Ninth Circuit sided with EPIC, with a 2-1 decision finding that EPIC should have been awarded its injunction. The Court ultimately found that “Under no reasonable interpretation of its language does the Project come within the [categorical exclusion] for ‘repair and maintenance’ of roads.”

This ruling has big implications for our National Forests moving forward. Under the Trump Administration, EPIC has seen a widespread abuse of this categorical exclusion to fast track logging projects without environmental review or public participation. 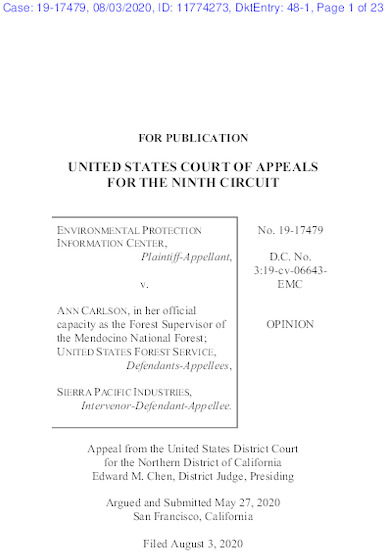 Download PDF (136.8KB)
Add Your Comments
Support Independent Media
We are 100% volunteer and depend on your participation to sustain our efforts!