COVID-19 infections spread quickly amongst the incarcerated because of the inhumane infrastructures of prisons. At San Quentin Prison in unincorporated Marin County, California, there are now 2,184 confirmed cases and as of this writing there have been 19 deaths. On Sunday Aug 2, demonstrators gathered at the prison's west gate. They said the prison has become a COVID-19 execution chamber.

Organized by Courtney Morris of No Justice Under Capitalism, about 600 people assembled in the Larkspur Ferry Parking lot.  With large banners, drums, trumpets and signs they marched up Sir Francisco Drake Blvd. to the prison's west gate. Relatives of prisoners were amongst those who participated in a rally with many speakers.

During the rally a couple of incarcerated men managed to call out and were interviewed by the organizer over a loudspeaker. They relayed that the situation in the prison is as bad as we are hearing on the news.

According to photographer Terry Scussel, "On the other side of the gate [where demonstrators gathered there] were about 50 prison officers who established a line block covering all roadways into the prison... they eventually closed the prison fence. Normally there is only a barrier gate bar with two guards at that entrance."

Sunday’s demonstration was the fifth such action since the cororavirus pandemic began. Activism over this issue is growing and does not seem likely to end until Governor Newsom implements large scale releases. 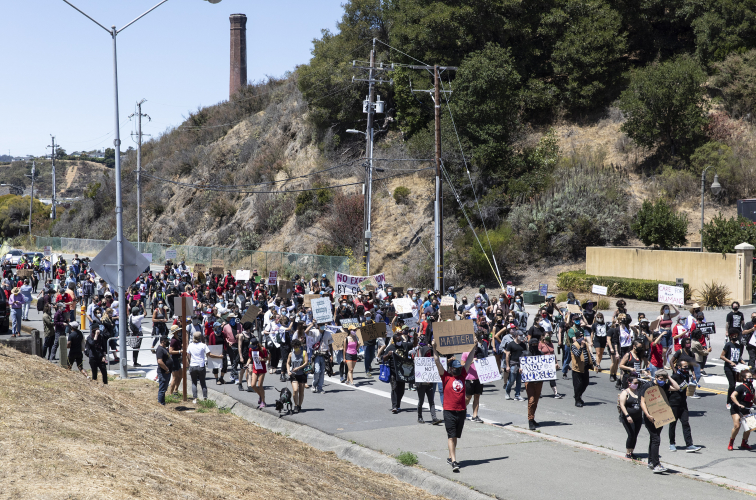 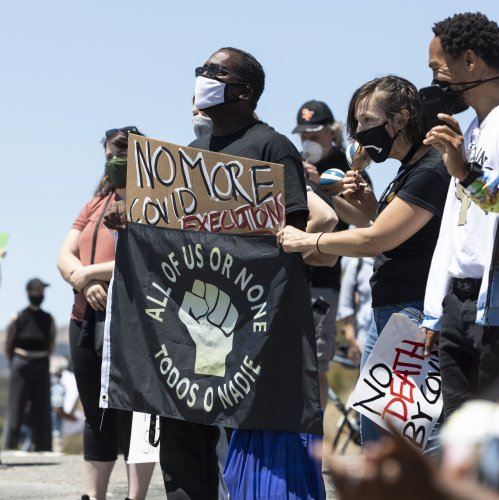 original image (4912x7360)
Stephanie Mohan, Pro Bono Photo
Add Your Comments
Support Independent Media
We are 100% volunteer and depend on your participation to sustain our efforts!