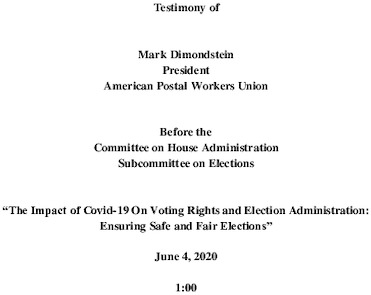 Download PDF (128.1KB)
Trump and the GOP are suppressing the vote for November election

Oakland — The contemptible Trump regime and the Republican Party/GOP are reportedly doing everything possible to suppress the vote of the Democratic Party this coming November as a way to remain in power.

Fearful of losing his home and job in the White House, the impeached President Donald J. Trump has been making wild paranoid unsubstantiated claims about widespread voter fraud with mail-in voting, and has suggested that the election next November should be delayed.

According to a report by Politico, mentioned by Rolling Stone, Trump said, “My biggest risk is that we don’t win lawsuits,” Trump told the Politico reporter he’d invited. He was referring to the series of lawsuits filed by his campaign and the Republican National Committee that fight the expansion of mail-in voting and seek to limit access to the ballot box in November. “We have many lawsuits going all over,” he said. “And if we don’t win those lawsuits, I think — I think it puts the election at risk.”

The unscrupulous Trump campaign and the Republican National Committee reportedly is spending at least $20 million on lawsuits to suppress the mail-in vote around the nation for 2020 during the Covid-19 pandemic, as a way to remain in power.

Additionally, in a statement by Mark Dimondstein, President of the American Postal Workers Union, in part Dimondstein states, “The dire financial straits of the Postal Service as a result of the COVID-19 pandemic is a national emergency. As Postmaster General Megan Brennan informed the House Oversight committee,the USPS is anticipating “a $13 billion revenue loss directly to COVID-19 this fiscal year and a $54.3 billion additional losses over ten years.

The demise of the Postal Service would have an extraordinary detrimental impact on the ability of citizens to safely exercise their democratic duty to cast a ballot. As such, I would emphasize that the first tenant of any vote-by-mail proposal must be to stabilize the finances of the Postal Service via an emergency appropriation of at least $25 billion, and by ensuring USPS has unconditional access to the $10 billion line of credit provided in the CARES Act. Vote by mail is critical to ensure the health and safety of every citizen during the course of this pandemic, we have seen the many ways the Postal Service is an important component of national infrastructure. The postal network has been a vital lifeline to millions of Americans confined to their homes, delivering millions of prescription drugs, medical supplies, public health information and other essential goods.

Election mail is another critical component of the Postal Service’s role in the civic life of the country and we’ve seen significant increase in the number of requests for absentee ballots. With infections still rising in many states and uncertainty of future flair ups,national vote by mail is on the order of the day. We know that vote by mail is a tried and tested system. Our members are proud of the work we do and we take seriously the oath of office we swear and our commitment to preserve the sanctity of the mail. Postal workers are committed to ensure every American can safely access their democratic right to vote this November.”

Making matters worse, according to a story in the New York Times, in part it reads, “In recent weeks, at the direction of a Trump campaign megadonor (Louis DeJoy) who was recently named the postmaster general, the service has stopped paying mail carriers and clerks the overtime necessary to ensure that deliveries can be completed each day. That and other changes have led to reports of letters and packages being delayed by as many as several days. Voting rights groups say it is a recipe for disaster. “We have an underfunded state and local election system and a deliberate slowdown in the Postal Service,” said Wendy Fields, the executive director of the Democracy Initiative, a coalition of voting and civil rights groups. She said the president was “deliberately orchestrating suppression and using the post office as a tool to do it.”


In the Bay Area, see the list of Chair persons below for the local Republican Party Central Committees, who may also be involved with Trump and the GOP in the dastardly scheme to suppress your vote this coming November.