Add an Event
Newswire
Calendar
Features
Home
Donate
From the Open-Publishing Calendar
From the Open-Publishing Newswire
Indybay Feature
Related Categories: Santa Cruz Indymedia | Health, Housing & Public Services | Police State & Prisons
Forced Movement for the Unhoused?
by Robert Norse (rnorse3 [at] hotmail.com)
Friday Jul 31st, 2020 6:14 PM
A "managed" campground has been set up in the middle of the Benchlands in the middle of the area previously used by unhoused displaced residents, from the pedestrian bridge to the Water St. bridge. HUFF (Homeless United for Friendship & Freedom) distributed a flyer this morning and interviewed numerous residents. 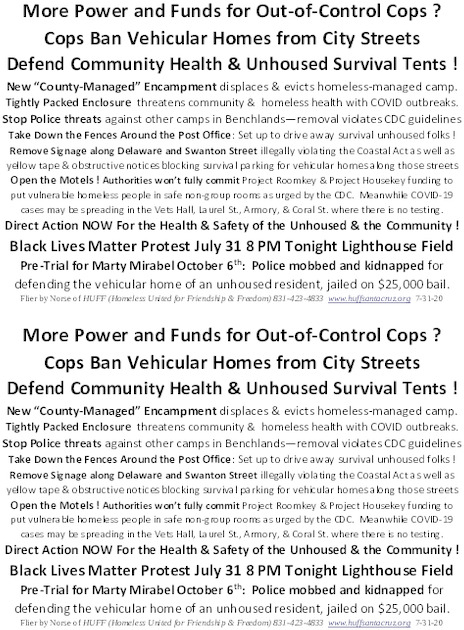 Download PDF (551.4KB)
Failure to include homeless client, homeless advocate, and community input in the creation of the newest "eliminate the unsightly homeless" may result in discomfort if not disease for residents and the community.

Some of the new residents of the "Many Fences" campground being set up in the Benchlands are positive about the internal tent space, cots, electrical outlets, regular meals, and available water previously denied to residents of the broader libertarian Benclands campground for the last 4 months there. Others are apprehensive that rules, already rumored to be restrictive regarding guests, personal property, and freedom of passage, may be tightened.

The new $6 per fenced foot area is being called a "FEMA"-like camp that "looks like a prison" in contrast to the 4-month long do-it-yourself campground now being displaced. Campers report they have been given repeated warnings they will have to vacate without any assurance of security or resources elsewhere.

Waiting list application for the Paul Lee Loft over at Housing Smidgeons (as some critics call the 115 Coral St. Housing Matters complex) or the Armory are posed as potential options. This alarms activist Alicia Kuhl of the Santa Cruz Homeless Union because of the increased chance of COVID-19 in indoor group settings--as happened recently in Watsonville. (See https://www.santacruzsentinel.com/2020/07/20/covid-19-cluster-closes-south-county-homeless-shelter/)

Meanwhile city manager minions Susie O'Hara and Megan Bunch circulate perhaps giving false safe shelter-in-place reassurances--as they did when dispersing the previous Ross Camp and Phoenix Camp residents into the streets, neighborhoods, and greenbelt as they did last year.

Jessica Yap (as some term Jessica York) has a front-page Sentinel story (https://www.msn.com/en-us/news/us/santa-cruz-unsanctioned-homeless-camp-under-new-management/ar-BB17ogDV which untypically contains some input from homeless advocates, but maintains the Sentinel blackout on advocate protest demanding motel room availability under Projects Roomkey and Housekey. The city is full of vacant motel rooms that are healthy alternatives to the COVID-vulnerable group shelter settings of Laurel St, the Association of Faith Communities shelters, the Vet's Hall, the Armory, the Paul Lee Loft, etc.

Fences twice torn down by "Defund the Police" Black Lives Matter protesters at the Post Office and the Town Clock have been re-erected by city workers. This suggests to some that the police intend to exclude shelter-in-place encampments in traditional spots without providing space for the vulnerable, disabled, and newly homeless in the growing economic crisis to go.

The lull in Direct Action protest may have emboldened Old Guard authoritarians to resume "business as usual" even as an eviction storm threatens and businesses close down. Tonight's Black Lives Matter protest at 8 PM at Lighthouse Field is reportedly targeting incarceration abuse at the Jail and its health threat not just to prisoners but to the entire community.

Strong public appearance by large crowds of concerned community members has had some impact in other cities. Direct action here is also badly needed. Will the community help resist well-funded and powerful police pressure against those outside to move--against CDC guidelines in the middle of a Pandemic and with no safe places to go? We'll see.,
Add Your Comments
Support Independent Media
We are 100% volunteer and depend on your participation to sustain our efforts!