Add an Event
Newswire
Calendar
Features
Home
Donate
From the Open-Publishing Calendar
From the Open-Publishing Newswire
Indybay Feature
Related Categories: International | Anti-War
Flare-up between Armenia and Azerbaijan; as the fog of war lifts
by David Davidian
Sunday Jul 26th, 2020 3:22 AM
The reality of Armenian sovereignty over themselves and the region of Nagorno-Karabakh is in stark contrast to Azerbaijani zero-sum land claims. 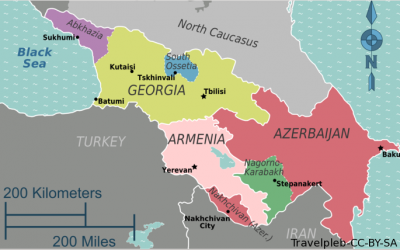 On July 12, 2020, fighting re-erupted between the ex-Soviet Republics of Armenia and Azerbaijan. However, this time an Azerbaijani major general was killed, its foreign minister was fired, followed by a threat by the Azerbaijani Ministry of Defense to blow up Armenia’s nuclear power station. As the fog of war lifts, we can fill some of the puzzle pieces with better-established facts.

To understand this subject requires some background knowledge. The Soviet Union was assembled not to allow any constituent republic or local ethnic group to have enough critical mass to free itself either politically or economically. Stalin moved previous “republics” from one jurisdiction to another, and if that didn’t work, deported entire ethnic groups. This social manipulation took place before his 1930s reign of terror, where he rounded up people across the Soviet Union based on the slightest offense or none at all. Those lucky enough not to get shot ended up in Siberia or equivalent.

The Caucasus region of the southern Soviet Union was a mixture of many ethnic groups. The politics of that region, Stalin’s bizarre ethnic policies, and external forces determined internal jurisdictional borders. For example, the previous “Republic” of Abkhazia was placed under Georgian jurisdiction in 1932. It stayed that way until the fall of the Soviet Union. Similarly, the region of Nagorno-Karabakh, which was well over ninety percent Armenian in the early 1920s, was placed under Azerbaijani jurisdiction. There were many reasons for this; most prominent was the Soviet Union’s need for recognition and international acceptance. Mustafa Kemal, who headed the Turkish republican movement, proclaimed himself an anti-imperialist, which was all Lenin and follow-on, Stalin, needed to hear. Both states had an interest in carving up the Caucasus for their ends. The majority of survivors of the Turkish genocide of the Armenians ended up in the Caucasus, and the politics of demanding justice by Armenians was considered by the Soviets, a grotesque expression of nationalism. It was in the combined interest of both Turkey and Stalin to quell any appearance of Armenian national demands. If an Armenian was caught with a personal handwritten genocide memoir, the price was a one-way trip to Siberia. Further, the creation of a Soviet Azerbaijani republic both moderated Armenian national expression and cemented Turkish efforts to create a second Turkish state, albeit under Soviet control.

Azerbaijani jurisdiction over Nagorno-Karabakh has a role in the Bolshevik’s effort to enhance its credibility in the eyes of the then world superpower, the British. British backing for Azerbaijani control of Nagorno-Karabakh was somewhat complicated. Some of it was in reaction to the Ottoman Empire’s dismemberment and associated fear by its Muslim subjects, particularly those in British-administered India. Gandhi was already protesting British rule in India. British political support for any Muslims controlling non-Muslim peoples helped quell unrest already brewing in the post-Sykes-Picot dismemberment plan for the Middle East. With Baku floating in oil, Britain seeking concessions in oil-rich Iraq, London’s open support for demands of both Islamic and Turkish nationalist forces was in their interest, at the expense of the indigenous Armenians of Nagorno-Karabakh.

Since the early 1920s, Armenians would periodically petition Moscow to transfer Azerbaijani jurisdiction of the Autonomous Region of Nagorno-Karabakh to Armenia. This effort was unsuccessful. In parallel, Soviet Politburo member Heydar Aliyev, the father of today’s Azerbaijani President Ilham Aliyev, as far back as the 1970s, actively encouraged Azerbaijanis to move into Nagorno-Karabakh and attract the best and brightest Armenians from Nagorno-Karabakh to Baku and other places. Haydar Aliyev’s ultimate goal was to have enough of an Azerbaijani demographic in Nagorno-Karabakh, and with their exclave of Nakhichevan, the small Armenian land separating the two regions, being compelled into an expanded Soviet Azerbaijani jurisdiction. The approaching disintegration of the Soviet Union ended Haydar Aliyev’s plans, but the issue remained unresolved.

Continuous Armenian protests broke out during the period of Glasnost and Perestroika demanding Nagorno-Karabakh unite with Armenia. The reaction in Azerbaijan was swift with the 1988 pogroms of Armenians in the Azerbaijani city of Sumgait. Armenians were subsequently violently expelled from across Azerbaijan. Azerbaijanis living in Armenia were expelled. Low-level fighting had already begun across Nagorno-Karabakh. Fighting neared full-scale in early 1990 with the expulsion of over a quarter-million Armenians from the Azerbaijani capital, Baku.

In May of 1994, Armenia and Azerbaijan signed a truce, and the Armenians of Nagorno-Karabakh gained full sovereignty over this region. Since then, border clashes continued between Azerbaijani and Armenian forces. See the accompanying map. The heaviest fighting since 1994 was in April of 2016 when hundreds of soldiers died, and Armenia lost something on the order of eight hundred hectares of land.

Armenia and Azerbaijan have been in an arms race, with each side attempting to tip the balance. Azerbaijan is a hydrocarbon exporting and transporting state; it has more funds dedicated to arms purchases than Armenia. However, Armenians are known as better soldiers. This difference was borne out over the past two weeks. Azerbaijan claims it has purchased over five billion dollars of Israeli high tech weaponry, including some of the world’s most advanced Unmanned Aerial Vehicles (UAVs), commonly called drones. Russia still appears as the leading supplier of arms to both sides, although Armenia being a member of the Collective Security Treaty Organization (CSTO), has an advantage with Russia.

Azerbaijan also supplies half of Israel’s crude oil and some of Europe’s gas requirements. British Petroleum’s (BP) investment in Azerbaijan’s hydrocarbon infrastructure is seventy-five billion dollars. Azerbaijan engages in rather wide-spread political marketing of its claim that the region of Nagorno-Karabakh belongs to them based on internationally recognized borders. However, these borders were drawn by Stalin. Azerbaijan also points to UN resolutions alluding to the same. In contrast, the Armenians of Nagorno-Karabakh exercise sovereignty over this region, rebuilt its capital, Stepanakert, that was ninety-percent destroyed by Azerbaijan shelling between 1988 and 1994. The overall death toll by the 1994 truce was 30,000.

Negotiations have dragged on for a generation. Azerbaijan demands Armenians completely relinquish the sovereignty they have over Nagorno-Karabakh in exchange for the promise of the highest degree of autonomy. Unfortunately, Azerbaijan has socialized a full generation of Azerbaijanis to hate all things Armenian. The chance of any peaceful Azerbaijani takeover of Nagorno-Karabakh is virtually zero. Armenians would be violently expelled or killed outright.

When Azerbaijan claims to offer Nagorno-Karabakh all the benefits of “broadest autonomy” under Azerbaijani jurisdiction, such offers are operationally impossible to enact. Not only was “broadest autonomy” noted during earlier negotiations multiple times, but specific references were made to Aland Islands, Tatarstan, Northern Ireland, South Tyrol, Trieste, and Catalonia by political historians in Baku. Taking Finland’s Aland Island as an example, if such status were a real offer, operationally it would mean:

Azerbaijan’s constitution would have to change, as it is currently a unitary state. If Nagorno-Karabakh Armenians were to accept autonomy under Azerbaijani rule, surely other ethnic minorities who find themselves under Azerbaijani jurisdiction, such as the Lezgin and Talysh, will demand geo-ethnic freedom. None of this is in the interest of the Azerbaijani state.

Armenian will become an official language within Azerbaijan, as will other non-Azerbaijani languages.

Nagorno-Karabakh will have a direct say in Baku’s foreign policy direction and decisions. This is not in the interest of the Azerbaijani state.

Also, if Azerbaijani demands for the return of all displaced peoples were enacted:

Armeno-phobia, having reached such a level in Azerbaijan, equates all evil with Armenians; inter-ethnic strife would run rampant across Azerbaijan, probably uncontrollable for years.

On July 12, 2020, an Azerbaijani UAZ military jeep approached an Armenian military post in northeast Armenia. The jeep was warned off, with the soldiers running off abandoning the vehicle. A group of Azerbaijani soldiers returned, some say to retrieve the jeep, and a battle ensued. These series of events appeared to be the catalyst for the latest flare-up in the fighting. What caused Azerbaijani soldiers to approach an Armenian post? Usually, the least complicated answer becomes the leading hypotheses in such cases.

A hypothesis would be incompetence on the part of the Azerbaijani soldiers and their local Azerbaijani commanders. A competing hypothesis is that Azerbaijanis were looking for a fight. I don’t think it’s the latter unless things are disintegrating in the Azerbaijani armed forces. The Azerbaijani losses were too high for this to be planned. Not only did Azerbaijan lose some highland real estate to Armenians in battles after re-securing the jeep, but also:

Lost a major general and colonel. What these ranking officers were doing so close to the front is a mystery in itself.

Lost a dozen more soldiers in battles with Armenians.

Lost another dozen or so UAVs, including two other Israeli models of UAVs.

Lost a Foreign Minister whose Azerbaijani President Aliyev accused of pandering to Armenians.

After these losses, the Azerbaijan Defense Ministry threatened to blow up Armenia’s nuclear plant. The Azerbaijani military placed artillery and tanks in Azerbaijani towns, so if Armenians retaliated, Baku would blame Armenians for attacking civilians. In the hours after July 12, 2020, Azerbaijani forces prevented their civilians from fleeing Azerbaijani border villages. In 1992 the same Azerbaijani “human shield” technique was used in Khojali, Nagorno-Karabakh, with many innocent Azerbaijani civilians succumbing to the crossfire.

On July 15-16, 2020, tens of thousands of protesters in Baku, Azerbaijan’s capital, were chanting “Allahu Akbar”, “Death to Armenia,” and “Send us to fight” following Azerbaijan’s latest defeats on the battlefield. On the first night, protesters broke into the parliament building.

On July 15, 2020, an ethnic minority in Azerbaijan, the Talysh, threatened rallies of 150 thousand participants. Azerbaijani security forces preempted their demands for local autonomy.

Since Armenia proper was attacked, the Armenian government informed the CSTO of the events of July 12. Eventually, when it was apparent Armenia was able to protect itself, any emergency CSTO meeting was not necessary.

Turkey pledged its support for Azerbaijan by offering military equipment, including its attack drone, the Bayraktar. There are unconfirmed reports of these already in Azerbaijan.

Even before any smoke cleared, pundits claimed this latest flare-up is part of a larger Armenian plan to drag the CSTO into fighting Azerbaijan. Others claimed this latest fighting is a Turkish-Russian proxy battle, considering Russia and Turkey are becoming conflicting sides in Syria, Libya, the Gulf, the Balkans, etc. Azerbaijan claims Armenia was taking advantage of the COVID-19 pandemic, although it is not clear how. It is dangerous to cherry-pick conjecture to fit politically desirable conclusions.

Social media participants strive to determine who started this latest fighting. It is almost irrelevant who did. The current situation does not bode well for Azerbaijan. It lost a Major general and colonel, well over a dozen soldiers, probably lost more as POWs, has an angry population out for blood, and ethnic minorities are protesting. Moreover, it has a big reset at its Foreign Ministry, which will severely hamper whatever has sufficed for negotiations.

About the author
David Davidian is a lecturer at the American University of Armenia. He was a Nuclear Reactor Engineer at a major US nuclear facility and holds three US patents. His long high technology career included being IBM Federal’s Systems Architect for the US Air Force. He has spent over a decade in technical intelligence analysis.
Add Your Comments
Support Independent Media
We are 100% volunteer and depend on your participation to sustain our efforts!