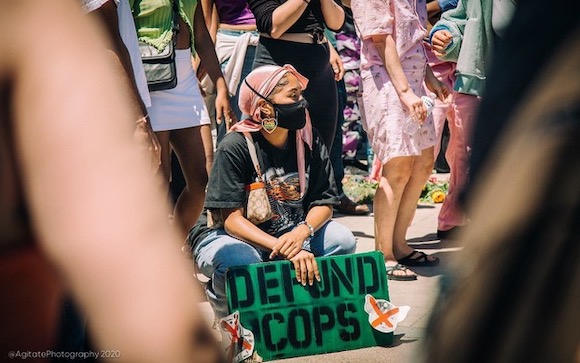 Feigning concern about sudden cuts to policing, the so-called “equity caucus” ignored the suffering in the community due to the triple crises of the COVID19 pandemic, the resulting economic depression, and the effects of white supremacy and racialized violence. They exposed their lack of ability to take on transformational leadership and lack of care to be accountable to their constituents at this time of crises.

And despite invoking the language of the movement that has filled the streets of Oakland and public comment to city council for months, Mayor Schaaf used her vote to break the tie in order to stop further cuts to OPD, revealing her true priorities.

We know this decision doesn't reflect the values of Oakland residents who are overwhelmingly questioning police overspending and suffering from a lack of programs and policies that will actually keep us safe.

We need a city council that truly believes that the lives of Oaklanders matter and acts accordingly, not just in words, but in budgets.

Next Tuesday Oakland City Council has another opportunity to do something right — but we need your continued support.

Join us at the Oakland City Council meeting next Tuesday, July 28 to support a "Reimagining Public Safety Task Force" made up of community members and impacted people, not law enforcement or mayoral appointees!

What: Tell City Council to Defund OPD
When: Tuesday, July 28 at 12pm
Where: City Council hasn't posted the Zoom info yet. More meeting details to come!

A “Reimagining Public Safety Task Force” was introduced on Tuesday night, an idea put forward by the Defund the Police coalition, lifted up by Councilmember Nikki Bas, and later joined after intense community pressure by Councilmember Loren Taylor.

This task force would be charged with defunding the police by 50% in next year's budget cycle. A unanimous demand was put forward, through public comment and a community survey, that the task force must be made up of community members and survivors of police violence, not law enforcement or mayoral appointees. The vote on this task force will be held on Tuesday.

The very existence of this proposal to establish a transition team to cut OPD by 50% is due entirely to the pressure from the people. As we move forward, we will continue to center the marginalized, and lift up voices of the most impacted. They are the true experts in this “reimagining,” in dreaming of a world where our lives more than matter; a world where our lives are precious and our voices powerful.

Last Tuesday revealed who will stand with us in that truth, and who we will hold accountable come November.
http://www.antipoliceterrorproject.org
Add Your Comments
Support Independent Media
We are 100% volunteer and depend on your participation to sustain our efforts!