Add an Event
Newswire
Calendar
Features
Home
Donate
From the Open-Publishing Calendar
From the Open-Publishing Newswire
Indybay Feature
Related Categories: San Francisco | Education & Student Activism
Stop SF Privatization Of Balboa Reservoir & Defend SF Community College
by Labor Video Project
Friday Jul 24th, 2020 11:15 AM
The land grab of SF PUC owned Balboa reservoir by the developer Avalon was opposed by speakers at the Ocean campus of San Francisco Community College on July 23, 2020. They also discussed the destruction of ESL classes and the closure of Fort Mason and other campuses. The CCSF administration and Board of Trustees speakers charged are dismembering the community college and destroying the futures of immigrants, Blacks, Latinos, working class youth and the faculty and staff of the college 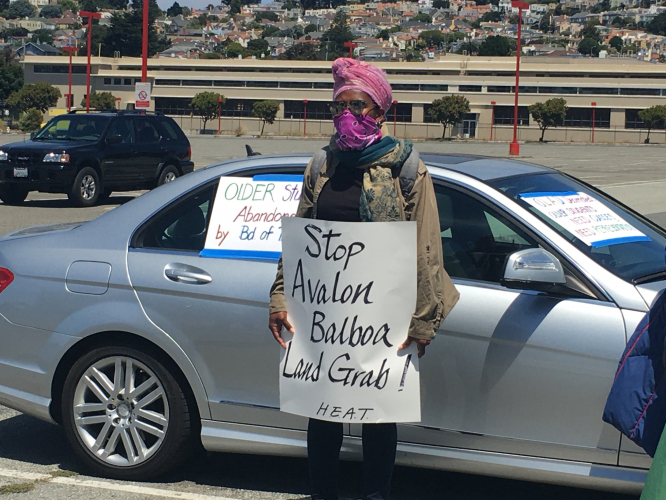 original image (4032x3024)
Students, faculty and supporters of public education spoke out on July 23, 2020 in front of the SF PUC owned Balboa reservoir that the City of San Francisco planning department and Mayor London Breed want to turn over the public space over to the Avalon developers for 1100 condos mostly for high paid tech workers.

Speakers talked about how it would harm the students and the future of the community college.

They also talked about the layoff of 30% of the ESL faculty destroying their opportunities to learn English. Also speakers talked about the closure of Fort Mason and the threat to other campuses.

The new Chancellor has also laid off all part time librarians threatening the right of students to have a library at SF. City college.

This even was sponsored by Higher Education Action Team HEAT

An appeal of the Balboa Reservoir project’s environmental review filed by City College of San Francisco community members will be heard next month, the group announced Tuesday.

The appeal was filed June 19 on behalf of Madeline Mueller, Wynd Kaufmyn, and Alvin Ja and is backed by the Public Land For Public Good coalition, which is seeking to boost the 1,100-unit development’s affordable housing ratio. It calls for an Environmental Impact Report (EIR) to be conducted for a version of the project that is 100 percent below-market-rate housing.

“You cannot approve a project based on a defective EIR,” said Stuart Flashman, the attorney representing the trio. “You’re buying a pig in a poke.”

The Planning Commission approved the environmental review in May, recommending that the Board of Supervisors rezone the Public Utilities Commission-owned land west of City College’s Ocean Campus and south of Archbishop Riordan High School.

Core issues with the EIR revolve around a lack of transit access and affordability, and the fact that the analysis that doesn’t take coronavirus impacts into account, the appeal said. Developer AvalonBay would pay $10 million in fees for transportation sustainability but opponents remain concerned about traffic congestion.


The San Francisco Municipal Transit Authority has cut most bus service across The City due to the coronavirus pandemic and expects up to 40 bus lines, some of which run by City College, to remain cut until a different source of revenue arrives.

The appeal also takes issue with the assessment and funding of affordable units, which would make up half the planned units. The City is supposed to fund 17 percent of the total units but faces a projected $1.7 billion deficit over the next two years.

Some opponents also object to the sale of public land to a developer to make 550 units of market-rate housing for $11.4 million — a fraction of the usual cost for San Francisco property, the Chronicle reported.

Some neighbors support the project, however, saying it will bring affordable units and public benefits to the area. About four of the 17.6 acres would be reserved for public uses, like a childcare facility and play space.

“The City really can be proud of going about this process the right way,” wrote Steve Marzo, an Ingleside resident, in an Examiner op-ed. “At a time when the city needs housing above all and the budget is incredibly strained, we can’t let this opportunity slip away.”

The Board of Supervisors will hear the appeal in August.
https://www.youtube.com/watch?v=uDyfCtJm6Bc
§CCSF John Adams Student President Orlando Galvez Speaks Out
by Labor Video Project
Friday Jul 24th, 2020 11:15 AM 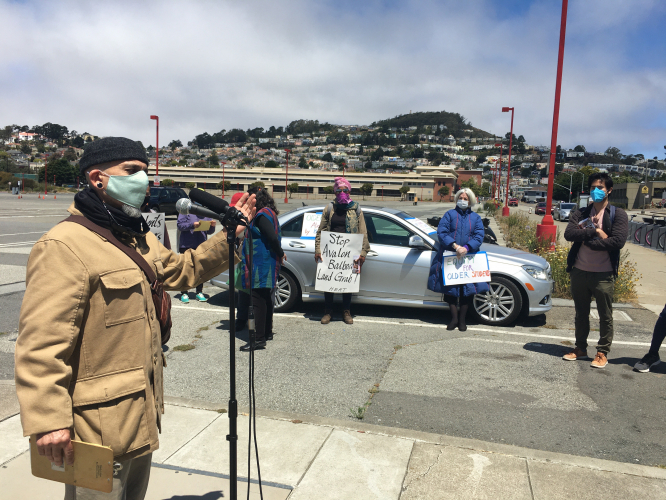 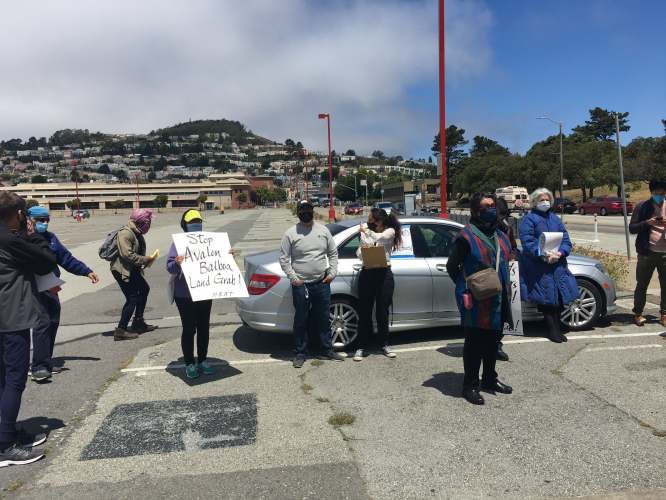 original image (4032x3024)
Some of the supporters of SF Community College rallied together to oppose the land grab of Balboa reservoir to Avalon developers and the closure of other campuses of CCSF.
https://www.youtube.com/watch?v=uDyfCtJm6Bc
§Signs Opposed To Corrupt Land Grab at SF PUC Balboa Reservoir
by Labor Video Project
Friday Jul 24th, 2020 11:15 AM 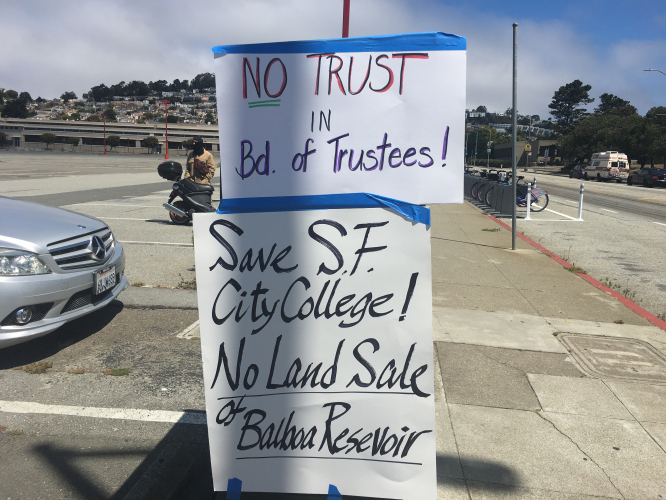 original image (4032x3024)
The developer Avalon who controls the SF Planning Commission with the support of Mayor London Breed is supporting the land grab at Balboa reservoir. The systemic corruption of the Planning Commission and the PUC is now being investigated by the US Attorney.
https://www.youtube.com/watch?v=uDyfCtJm6Bc
§Anita Martinez Speaking At Balboa Reservoir
by Labor Video Project
Friday Jul 24th, 2020 11:15 AM 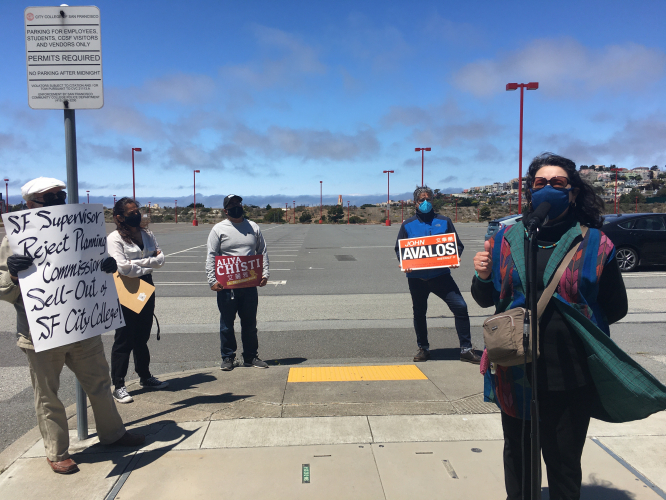 original image (4032x3024)
Educator Anita Martinez talked about the need to defend SF Community College from privatizers who want to demolish the college and sell it off to developers for profit.
https://www.youtube.com/watch?v=uDyfCtJm6Bc
Add Your Comments
Support Independent Media
We are 100% volunteer and depend on your participation to sustain our efforts!