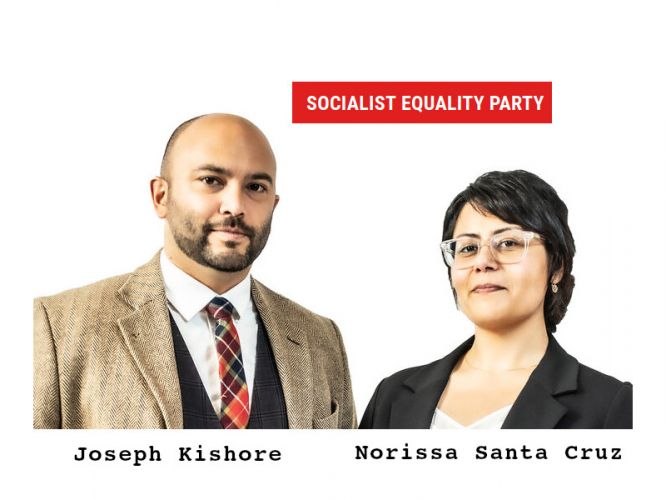 By Kevin Reed at the World Socialist Web Site


A California district judge ruled on Tuesday against the Socialist Equality Party’s lawsuit challenging as unconstitutional the ballot access requirements in the state for the 2020 presidential elections during the coronavirus pandemic.

In her 12-page decision on Joseph Kishore, et al. v. Gavin Newsom, et al., Judge Dolly M. Gee of the US District Court of the Central District of California ruled that SEP candidates Joseph Kishore for US president and Norissa Santa Cruz for US vice president must collect the signatures of 200,000 voters on nominating petitions in order to appear on the ballot.

In their lawsuit, filed on June 30, the SEP candidates, who are the plaintiffs in the lawsuit, challenged California’s requirement that they gather and submit nearly 200,000 physical signatures over 15 weeks from April 24 to August 7 to obtain ballot status for the November 3, 2020, election.

The case was filed against California’s Democratic Governor Gavin Newsom and Secretary of State Alex Padilla, who are the defendants, and called on the court to impose a mandatory injunction blocking the state’s petitioning requirements as “effectively impossible” to satisfy during the COVID-19 pandemic.

The California Attorney General’s office responded on behalf of Newsom and Padilla on July 12, arguing that the SEP lawsuit, if victorious, would result in “an unmanageable and overcrowded ballot for the November presidential general election that would cause voter confusion and frustration of the democratic process.”

In response to the state’s filing, the SEP filed a reply on July 15 comprehensively substantiating Kishore and Santa Cruz’s case that the requirement of collecting 200,000 physical signatures during the pandemic was impossible, “in light of the ongoing global COVID-19 pandemic and the state’s countermeasures to it.”

In her ruling yesterday, Judge Gee wrote that while the SEP candidates’ concerns about in-person contact with potential voters during a pandemic were “understandable,” they did not meet the “burden of demonstrating that such contact would be deadly when undertaken with recommended safety precautions, such as social distancing, the wearing of face coverings, and proper hygiene.”

Providing an example of how SEP petitioning for ballot status should supposedly be conducted during the pandemic, Judge Gee stated that “consumers regularly are required to line up outside of grocery stores and other open public establishments at least six feet apart—nothing would have prevented Plaintiffs’ signature gatherers from distributing leaflets, posting signs, or otherwise engaging with interested voters (from a safe distance) on how they may sign nominating petitions or register to vote near the entrance to a supermarket, train station, or other public place.”

Based on this reasoning, Judge Gee determined that the pandemic and the lockdown did not “severely burden” the SEP candidates’ ability to get on the ballot.

Judge Gee also claimed that the SEP had a path to ballot access other than collecting 200,000 physical signatures on petitions, which allegedly involved registering 68,000 California residents as Socialist Equality Party voters. She writes, “There are many ways to drum up voter registration, several of which do not require in-person contact, appearing in public, leaving the home, or the use of the mails, which Plaintiffs decry as prohibitively expensive.”

At the oral arguments on Monday, the SEP candidates’ attorneys pointed out that this reasoning effectively “punishes them for failing to have a time machine.” Registering people as party voters is much more difficult than gaining physical signatures, and if the SEP had wanted to attempt to gain ballot access through that method, it would have begun those efforts in 2019.

Judge Gee also responded to the SEP’s observation that early in the campaign—when Governor Newsom imposed a state of emergency and issued a stay-at-home order—the guidance from the state was vague, difficult to find and stated only that “election personnel” were considered essential workers.

Judge Gee writes, “But even assuming that is true, California clarified in early May and early June that ‘election-related activities’ and signature gathering were essential activities exempted from the stay-at-home mandate.”

Elsewhere in the ruling, Judge Gee says that “California remedied any such confusion by June 5, 2020 at the latest” by uploading an exception to a “Q&A” web page.

In their most recent legal brief, filed on July 15, the SEP candidates wrote that “the uploading of these vague phrases to an obscure Q&A web page never viewed by Plaintiffs is not sufficient to trigger an obligation for Plaintiffs to begin collecting signatures... Most importantly, none of this has any bearing on whether signature-gathering was safe.”

Judge Gee also claimed that the SEP should have filed its lawsuit earlier, instead of “delaying” until late June. In summing up her decision, Judge Gee writes, “Plaintiffs have not shown that they exercised reasonable diligence to maximize their efforts to appear on the ballot in November 2020. The Court therefore concludes that California’s ballot-access requirements and stay-at-home orders do not ‘significantly impair’ Plaintiffs’ access to the ballot.”

Finally, in a footnote on page 11 of the ruling, Judge Gee acknowledges that the SEP lawsuit is calling on the court to impose a “mandatory injunction” against the state’s ballot access laws and “proceed one step further by affirmatively ordering California to place them on the ballot or, in the alternative, order California to adopt an easier-to-satisfy access requirement,” adding, “Put simply, Plaintiffs essentially ask the Court to write their names onto California’s ballot by judicial fiat. For the reasons addressed above, the Court cannot do so.”

“I think that what is basically ridiculous is that they are treating our gathering of signatures as supposedly ‘essential,’ equating it with people getting food or health care,” said Norissa Santa Cruz, reacting to the ruling.

“This is not an ‘essential’ activity. Health care workers are essential. Firefighters are essential. Gathering signatures outside of a Costco during a deadly pandemic involving an airborne contagion is not ‘essential.’ This is an obstacle that the state has placed between us and our participation in the elections.

“What if one of our supporters got sick? Or what if someone died? Would we still be expected to gather 200,000 signatures? Nobody has answered these questions.” She continued, “This is the same callous attitude that is being displayed towards teachers and other workers who are being sent back into their workplaces before it is safe for them to do so.”

“California is refusing to provide us with a safe way to get on the ballot,” she said. “We disagree with this decision and intend to appeal.”

https://www.wsws.org/en/articles/2020/07/2...
Add Your Comments
Support Independent Media
We are 100% volunteer and depend on your participation to sustain our efforts!