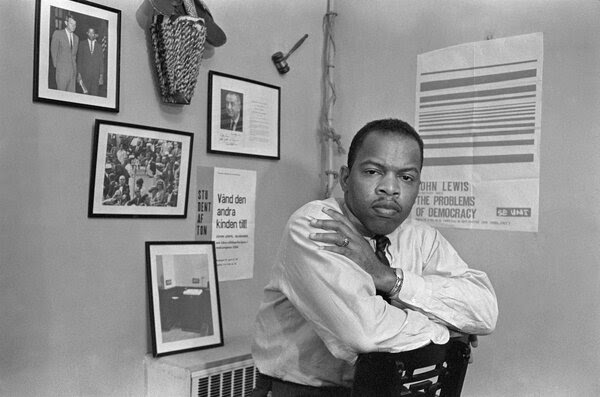 The NAACP mourns the passing of Congressman John Lewis, a resounding civil rights giant. He fought harder and longer than anyone in our nation’s continuing battle for civil rights and equal justice.

Often called “one of the most courageous persons the Civil Rights Movement ever produced,” John Lewis dedicated his life to protecting human rights, securing civil liberties, and building what he calls “The Beloved Community” in America. By 1963, Lewis was dubbed one of the Big Six leaders of the Civil Rights Movement. At the age of 23, he was an architect and a keynote speaker at the historic March on Washington in August 1963.

Along with Hosea Williams, John Lewis led over 600 peaceful, orderly protestors across the Edmund Pettus Bridge in Selma, Alabama, on March 7, 1965. They intended to march from Selma to Montgomery to demonstrate the need for voting rights in the state. Despite more than 40 arrests, physical attacks, and serious injuries, John Lewis remained a devoted advocate of nonviolent philosophy.

John Lewis went on to become a United States Congressman and has served as U.S. Representative of Georgia’s Fifth Congressional District since 1986. Lewis was a member of the influential House Budget Committee and House Ways and Means Committee, where he served on the Subcommittee on Health until his death. Congressman Lewis served as Senior Chief Deputy Democratic Whip and sat in a direct line of succession to the number two Democratic leadership position in the House. John Lewis is the recipient of numerous awards, including the prestigious Martin Luther King, Jr. Nonviolent Peace Prize. He received the NAACP Spingarn Medal in 2002 and the NAACP Chairman’s Award in 2020.

If we know anything about our dear friend John Lewis, he wanted us to continue the battle for full participation in a democracy that he began long ago with other civil rights icons. On November 3, we can and must honor our beloved John Lewis by casting our ballot and ensuring that our vote is counted, up and down the ballot.

John Lewis was a national treasure and a civil rights hero for the ages. We are deeply saddened by his passing but profoundly grateful for his immense contributions to justice. He used every waking moment of his 80 years to push this country toward more representative democracy and left behind a remarkable model. It is up to us to pick up his mantle and carry on, and we urge the entire nation to join us. As people of all colors are in the streets seeking racial justice, we urge all that can to speak louder and stay a little longer to honor the best warrior for democracy our nation has ever known.

The NAACP extends our sincerest condolences to the family of Congressman Lewis and sends prayers of comfort and strength now and always."

>>>>>>
>>>>>>
Related Categories: U.S. | Racial Justice
Add Your Comments
Support Independent Media
We are 100% volunteer and depend on your participation to sustain our efforts!