Add an Event
Newswire
Calendar
Features
Home
Donate
From the Open-Publishing Calendar
From the Open-Publishing Newswire
Indybay Feature
Related Categories: East Bay | Government & Elections | Police State & Prisons | Racial Justice
Reject the “Exigency Clause” Measure — No Martial Law in Oakland
by Coalition for Police Accountabiity
Tuesday Jul 21st, 2020 12:35 PM
This letter was written by Cathy Leonard on behalf of CPA in response to the Police Union’s addition to a Measure LL [Police Commission] clean-up measure which would allow the city administrator to declare a version of martial law. If Mayor Schaaf really opposes the Portlandization of Oakland, she needs to demand this addition be removed from any police accountability measure now. 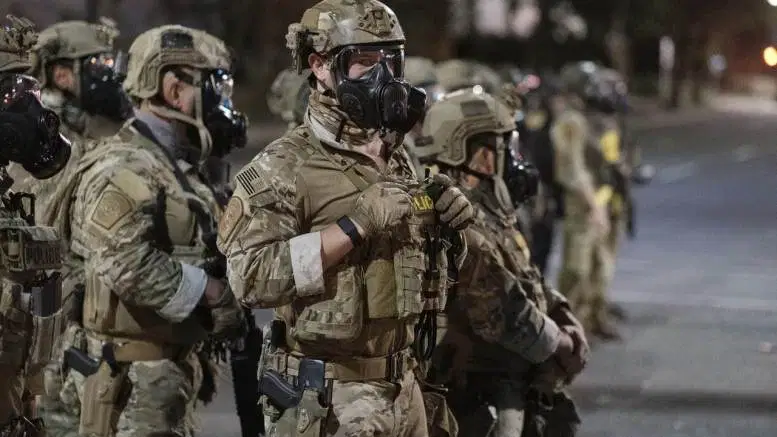 I am writing to you of my concerns regarding the language in Section 604(b)5 of Measure LL which grants power to the police chief in direct contradiction to policy written by the Police Commission.

I am Oakland born and raised and returned to North Oakland, having lived in West Oakland, East Oakland, and the Hills. My parents migrated to Oakland with their parents during the Great Black Migration and have taught me the importance of voting which I have every year since I attained the legal voting age.

I have served as a volunteer board member for District 1 for the Community Policing Advisory Board, the Community Development Block Grant, and as Vice Chair of the Beat 10Y NCPC. I continue to volunteer on many community projects in the Santa Fe and Golden Gate neighborhoods. I am on the steering committee of the Coalition for Police Accountability and also co-chair one of its working committees. And I vote. I voted for Measure LL to provide oversight of the Oakland Police Department which has proved over and over again that they cannot or will not police themselves.

• sexual abuse of a minor child by several officers,

• supervisors and chiefs who cover up officer committed crimes,

• promotions of officers who commit crimes,

• rude and disrespectful attitudes visited upon Black and Brown people,

• a burgeoning budget with no accountability,

• 17 years under federal oversight with no end in sight,

• lack of trust by an increasing number of Oaklanders, and

• many other transgressions too numerous to recount here.

On Thursday, July 9, 2020, the Police Commission voted unanimously to ban chokeholds and carotid holds in their use of force policy. The police union’s immediate response was to carve out an exception to that policy. “Exigent circumstances” could mean anything the interim police chief deems “exigent.” We could have another George Floyd on our hands. This is completely unacceptable and cannot stand.

As part of both settlements, the City and OPD agreed to abide by a negotiated crowd control policy that prohibits impact munitions and explosives from being used in the manner they were used during the Occupy events, sets guidelines for constitutional policing of demonstrations and other crowd events; requires OPD to negotiate with the National Lawyers Guild and the American Civil Liberties Union concerning any revisions to the crowd control policy; and provides that the federal court will have the power to enforce compliance with the settlement, including crowd control policy, for up to seven years. The “exigent circumstances” provision flies in the face of those two cases.

Our most “exigent circumstance” is to rescue our civil rights and democracy despite moves toward autocracy in this country and now it appears in our City. Doing our local part requires resisting the panicked impulse to give more authority to officials in the absence of public oversight and legal protections.

We respectfully request that the entire proposed language in Section 604(b)5 be stricken before the measure is sent to the ballot. Any changes to policy, procedures, customs, or General Orders of the Department must be approved by the Police Commission.

Thank you for your courtesy and cooperation in this regard.

Attorney Larry White of the Coalition for Police Accountabiliy explains:

Re: Measure LL Clean-up Or Should We Say “Police Empowerment Measure?”

You are scheduled to consider the Measure LL clean up draft on Thursday, July 23. The intent was to strengthen the Police Commission. But the draft contains a “poison pill” that undermines the entire effort. You must delete it.

The so-called “exigency clause” (at the end of (b)5) is an unacceptable expansion of police power. “Exigent circumstances” could mean almost anything. Large protests, certainly, but much more than that. Any police use of force is a reaction to some level of such circumstances.

During “exigent circumstances” the police could overrule the civilian Police Commission and all existing rules (including Federally negotiated crowd control policies) that might restrain them. Tear gas, rubber bullets, flash bang grenades, choke holds—if the police chief wants these practices for a fourteen day period—long enough to “quell” protests or other “exigent circumstances” —they could be used.

Could these powers be abused? Does anyone doubt that they would be? Some might say that the City Council will not grant the chief such powers. But even if you would not, no one can know what future Councils will do if the Charter allows it.

This is a potentially dramatic expansion of police power that has never before been considered necessary in Oakland. Why is it necessary now?

The Coalition for Police Accountability has worked for years to establish civilian oversight of the Oakland Police Department. The Measure LL clean up effort which we initiated and labored on for the past two years was meant to remedy some of the shortcomings of the initial measure. This effort was intended to enhance civilian oversight.

The “exigency clause” does the opposite. It carves out a critical area of policing and removes it from oversight.

A ballot measure that contains the “exigency clause” is one that we would frame as a “Police Empowerment Measure.” Council members that vote for it will have to answer this simple question—“Why did you vote for the police and against the community?”

Public policy reasons should be enough for you to delete the clause. But there are also legal reasons. The National Lawyers’ Guild and the American Civil Liberties Union sued the City and obtained settlements and a consent decree that conflicts with the powers that could be granted to the police by the “exigency clause.”

The first case, Campbell et al. v. City of Oakland, CV11-5498 JST, challenged OPD’s unlawful use of shotgun-fired, lead shot filled “beanbag” rounds, explosive teargas filled blast grenades, and other unconstitutional force and arrests against protesters on October 25 and November 2, 2011. The Campbell settlement overlaps with a separate $1,025,000 settlement in Spalding v. City of Oakland, CV11- 2867 TEH, a class action lawsuit brought by the NLG on behalf of 150 Justice for Oscar Grant protesters who were illegally arrested and jailed in 2010.

As part of both settlements, the City and OPD have agreed to abide by a negotiated crowd control policy that prohibits impact munitions and explosives from being used in the manner they were used during the Occupy events, and sets guidelines for constitutional policing of demonstrations and other crowd events; requires OPD to negotiate with the NLG and ACLU concerning any revisions to the crowd control policy; and provides that the federal court will have the power to enforce compliance with the settlement, including the crowd control policy, for up to seven years from now.

The ”exigency clause” also sets up a conflict with the Negotiated Settlement Agreement and the supervision of the OPD by a federal court. It would allow the City Council to delegate power to the police chief without regard to the NSA or the authority of the federal monitor/compliance director.

In addition, the Coalition is preparing litigation to enforce the provisions of the Brown Act and the Sunshine Ordinance. More details regarding this will be provided in a letter from our lawyers at Troutman Pepper Hamilton Sanders, LLP.

For all these reasons, and for the communities of Oakland, we must insist that you delete the harmful language at the end of subsection (b)5 of the draft under consideration before it can go to the ballot.

Please Sign the Petition below:
https://www.change.org/p/oakland-residents...
Add Your Comments
Support Independent Media
We are 100% volunteer and depend on your participation to sustain our efforts!