Add an Event
Newswire
Calendar
Features
Home
Donate
From the Open-Publishing Calendar
From the Open-Publishing Newswire
Indybay Feature
Related Categories: California | Central Valley | U.S. | Racial Justice
A Great Nation Celebrates Our Journey Towards A Juneteenth National Holiday
by Khubaka, Michael Harris
Monday Jul 20th, 2020 2:20 PM
The Juneteenth National Independence Day Act would make June 19 an official annual federal holiday, the first new one created since the 1980s. While officially this would guarantee a day off for federal employees and public schools, in practice many global multinational corporations will follow suit. 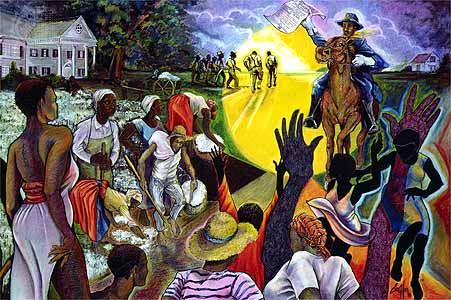 Official International scholars and archivists are gathering salient documentation of the early enslavement of Pan African prisoners of war by Portuguese and Spanish military conquest who were blessed by Roman Catholic Papal authority, said to begin in 1442.

The world was no longer flat and the expansion of maritime technology during the Age of Sail facilitated Danish, Dutch, French, Portuguese, Spanish and British military exploration and colonization. Vast expansion of exploitation throughout the continent of Africa facilitate chattel slavery and the decimation of vast regions of indigenous populations throughout the Western Hemisphere.

In the late 18th century, the 13 British Colonies of North America declared independence and formal documents were adopted on July 4, 1776, by the Second Continental Congress proclaiming, “We hold these truths to be self-evident, that all men are created equal, that they are endowed by their Creator with certain unalienable Rights, that among these are Life, Liberty and the pursuit of Happiness.” This credo became the bedrock and guiding light of the new nation, the United States of America, and it remains so today.

The "concepts" of equality, life and liberty applied only to certain class of land owning white men, and certainly not any person of Pan African Ancestry. By the mid-19th century, the contradiction of freedom and democracy predicated upon the enslavement of Pan Africans came to a head with the 1860 election of President Abraham Lincoln.

Beginning with South Carolina, southern states seceded from the Union and the U.S. Civil War began at Fort Sumpter. The Confederate States of America were organized in the "Heart of Dixie" and moved to Richmond, Virginia under President Jefferson Davis who had no intention of ever including freedom for people of Pan African ancestry.
Union President, Abraham Lincoln as a necessary war measure issued an Emancipation Proclamation, which declared free enslaved human beings in Confederate states in succession and authorized the arming of "fit and necessary US Colored Troops," was issued on January 1, 1863.

A bloody and costly war raged and news of freedom advanced as Union forces advanced. Most notably, after the assignation of President Lincoln, the Military focus on the final Confederate Port of Galveston Island, Texas was finally fulfilled on June 19, 1865 after April 1865 surrender of Confederate General Lee to Union General Grant in Virginia.

Today, Juneteenth is a very special occasion, as the agreed upon date to celebrate our journey from slavery to freedom.
Juneteenth celebrations spread across the nation to become an annual festive commemoration celebrating the agreed upon date of the ending of slavery, and more broadly celebrating the entire journey from Slavery to Freedom, throughout the entire United States of America and around the world.

Currently, Juneteenth is an unofficial celebration rather than an official Federal Holiday. Being a federal holiday makes it official and means federal workers will have the day off. The last new federal holiday created was Martin Luther King Jr. Day, enacted in 1983 and first officially celebrated in 1986.
Currently, all but four states recognize Juneteenth as a state holiday or commemoration: Hawaii, Montana, North Dakota and South Dakota, primarily from the work of the National Juneteenth Observance Foundation.

In 2020, in the aftermath of a Memorial Day execution, Juneteenth received a huge boost in name recognition among people with limited knowledge of U.S. History when President Trump announced plans for his first rally since the COVID-19 pandemic would be held on Juneteenth in Tulsa, Oklahoma.

Although President Trump subsequently changed the rally’s date to June 20 after a backlash, he told the Wall Street Journal, “I did something good: I made Juneteenth very famous. It’s actually an important event, an important time. But nobody had ever heard of it.”

On Friday, June 19, 2020, a large segment of America and the world celebrated and learned about the importance to America of Juneteenth for the very first time.

The Juneteenth National Independence Day Act would make June 19 an official annual federal holiday, the first new one created since the 1980s. While officially this would guarantee a day off for federal employees and public schools, in practice many global multinational corporations will follow suit.