Add an Event
Newswire
Calendar
Features
Home
Donate
From the Open-Publishing Calendar
From the Open-Publishing Newswire
Indybay Feature
Related Categories: International | Government & Elections
G20 Must Act, Say Hundreds of Religious, Labor, Human Rights, Environmental and Developmen
by Zach Conti
Thursday Jul 16th, 2020 2:08 PM
Washington DC - Ahead of Saturday's G20 Finance Minister meetings, a wide range of 213 organizations is pressing for more action to confront the global health and economic impacts of the coronavirus. The largest religious bodies in the United States and Africa were joined by the biggest labor unions, human rights, environmental and anti-poverty groups in letters sent to the G20, IMF and White House. 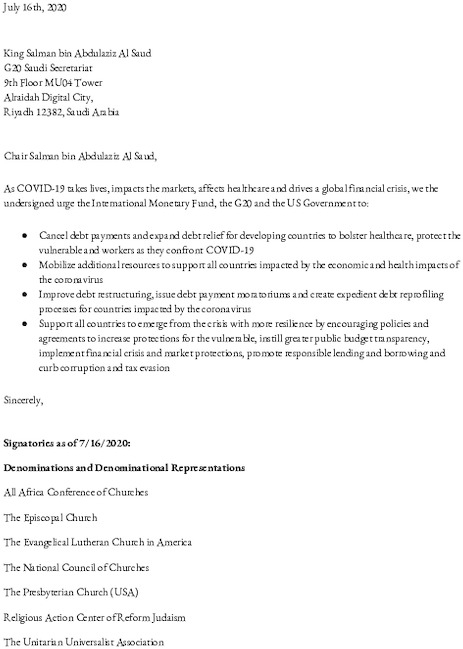 Download PDF (84.7KB)
In the letters, the groups call for debt cancellation for developing countries, more aid for countries, new processes to prevent financial crisis and measures that confront tax evasion and corruption.

"The coronavirus destroys lives and livelihoods and a growing coalition wants to see stronger action on the current crisis and new rules to stop future crises," noted Eric LeCompte the Executive Director of the religious organization that organized the G20 letter, Jubilee USA Network. "Many of the faith groups who signed the letter never signed a letter like this before. The impact of this crisis on vulnerable people propels communities to call for urgent action."

Counting their membership in the millions, labor unions including the United Steelworkers (USW), American Federation of Labor and Congress of Industrial Organizations (AFL-CIO) and American Federation of State, County and Municipal Employees (AFSCME) joined the faith groups in the G20 letter. Other signers include Human Rights organizations like Amnesty International USA and Pax Christi and also environmental advocates ranging from Amazon Watch to Friends of the Earth. Development groups were represented on the Jubilee USA letter such as American Jewish World Service, American Friends Service Committee, Bread for the World, Action Aid, Oxfam, RESULTS and Health Gap.

Major religious institutions led the Jubilee USA G20 letter including: The All Africa Conference of Churches, National Council of Churches, Religious Action Center of Reform Judaism and the Episcopal, Evangelical Lutheran, Presbyterian, Methodist and United Church of Christ Churches. The Unitarian Universalist Association and the largest representations of Quaker communities and Buddhist consortiums are on the letter. The US Conference of Catholic Bishops sent a separate joint letter with Jubilee USA and Pope Francis continues to push for measures outlined in the statement to the G20.

The majority of signers on the letter were churches, synagogues, dioceses and religious congregations representing small towns and urban centers.

"The G20 will make decisions this weekend that affect the survival of billions of vulnerable people confronting the pandemic," stated LeCompte who serves on United Nations finance expert groups. "We've seen progress in getting aid to many people that need it, but we need to mobilize a lot more resources for people to confront the crisis."

The United Nations estimates that 265 million more people are facing famine due to the coronavirus crisis. The International Labor Organization says 400 million jobs will be wiped out and the IMF asserts the current economic crisis rivals the Great Depression.

Jubilee USA began meeting with world leaders and generating tens of thousands of messages on the crisis in February. In March, the leadership of Jubilee USA outlined a coronavirus response plan for the IMF and G20.

"This weekend the G20 considers increasing more debt relief for countries already benefiting and other developing countries who've been left out so far," stated LeCompte. "The private sector has resisted participating and that's on the G20 agenda too. Finally they'll discuss accessing trillions of dollars in global reserve funds or the Special Drawing Rights. These are resources we need immediately." 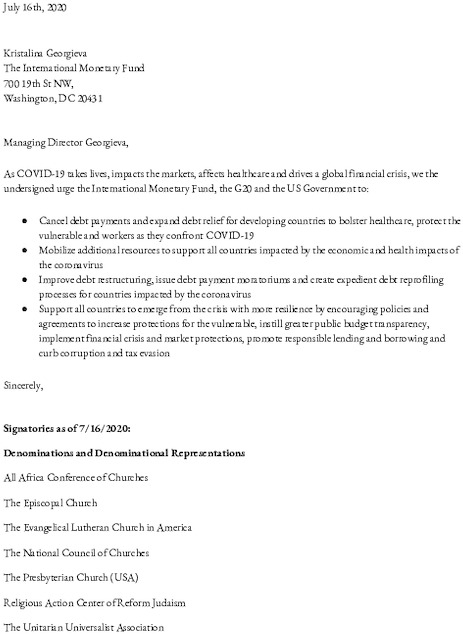 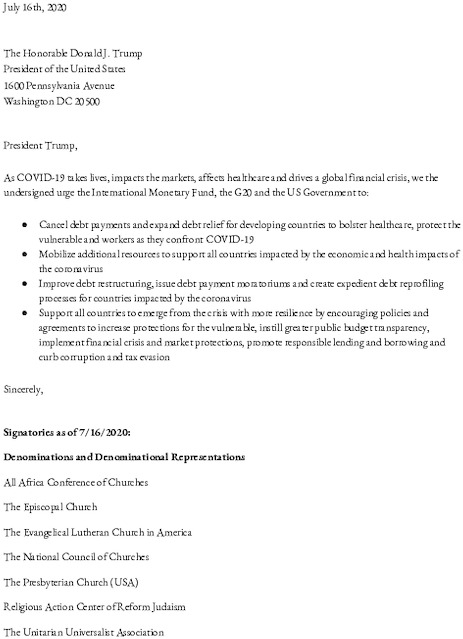 Download PDF (84.2KB)
https://www.jubileeusa.org/g20_must_act_sa...
Add Your Comments
Support Independent Media
We are 100% volunteer and depend on your participation to sustain our efforts!