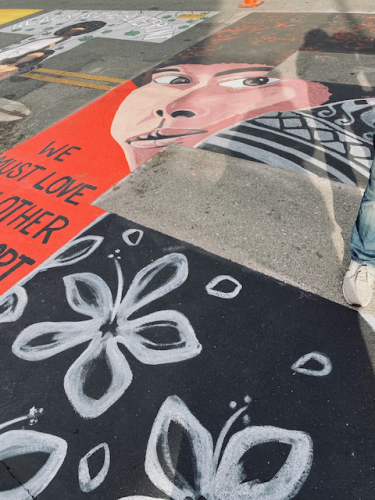 original image (480x640)
The National Police Association's existence is bewildering. It's ties to law enforcement are unknown and it has no list of staff or board of directors, according to the San Jose Mercury News.

The Palo Alto City Council has nevertheless reacted to this organization's demand that the painting of Assata Shakur, that is part of a Black Lives Mural on the street in front of City Hall, be removed. Shakur was the first woman to be included on the FBI’s Most Wanted Terrorist list. In 1977 she was convicted for the murder of a policeman, but she famously escaped to Cuba two years later.

The mural on Palo Alto's Hamilton Ave. is 245-foot-long and 17-feet-tall. It includes a quote from Shakur within a letter... “We must love each other and support each other”... and a drawing of the activist.

Mayor Adrian Fine said he will "definitely send a mention out to Palo Alto cops saying that I’m sorry this happened," according to the Mercury. The Mayor also emphasized that the mural was "always meant to be temporary" although local activists say he recently stated that he wants a sealant be applied to protect the mural. He did commit to not hastening the removal of the mural or any part of it. Meanwhile police Sgt. Tony Becker said he is considering formally asking the City Council to remove Shakur’s image from the mural. He is president of the Palo Alto Police Officers Association.