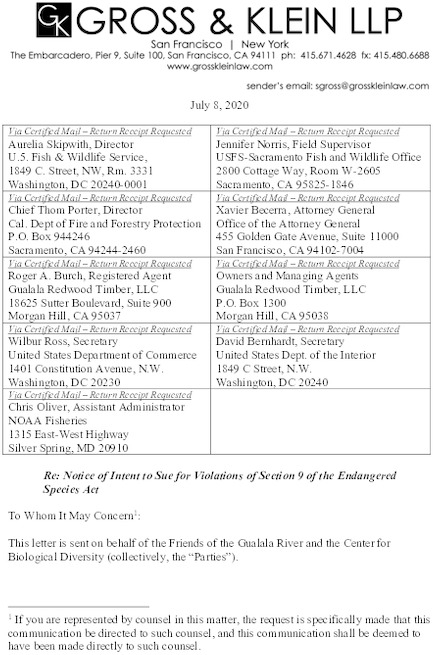 “The state is abdicating its responsibility to save these imperiled animals and some of California’s most spectacular redwoods,” said Peter Galvin, cofounder of the Center. “Logging has devastated this region and too many species are hanging on by a thread. We’re in an extinction crisis and we need to protect our wildlife now more than ever.”

The Gualala River ecosystem suffers from decades of abuse, including previous logging projects by the timber company. The proposed logging site, on 300 acres in Sonoma County, contains some of the last remaining mature floodplain redwood forest in the area.

The proposed logging project will use heavy equipment to remove redwoods and build logging roads and skid trails in the area. This will destroy the California red-legged frogs’ habitat and is likely to kill or injure frogs. The logging plan itself acknowledges the potential for logging activities to kill slow-moving animals.

Marbled murrelets and northern spotted owls rely on old forest stands with dense canopy cover, a habitat type that continues to decline due to commercial logging operations. In addition to reducing the habitat these birds need to survive, logging leads to increased predation of murrelets and increased competition for spotted owls.

The Center and Friends of Gualala River are represented by Gross and Klein LLP.

Friends of Gualala River is a local, citizen's nonprofit organization dedicated to the protection of the Gualala River, its watershed, and the species that rely on it.