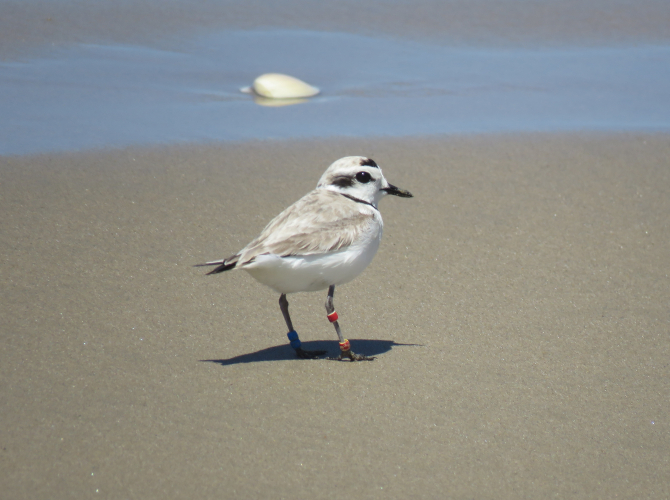 Today’s formal order also directs the California Department of Parks and Recreation to stop interfering with nesting by the federally protected shorebirds.

In early June, the Center for Biological Diversity documented and exposed State Parks staff attempting to prevent plovers from nesting in former off-road riding areas. Staffers were scuffing out nesting “scrapes” made by plovers and installing mylar flagging to deter expanded nesting. Plovers have been expanding their nesting and foraging areas since the beach was closed to vehicles in late March by the COVID-19 crisis.

“Kudos to the Coastal Commission for stepping in to protect snowy plovers at Oceano Dunes and keep critical beach nesting areas closed to vehicles,” said Jeff Miller, a senior conservation advocate at the Center. “These imperiled little birds deserve the chance to finish this nesting season without being run over by dune buggies.”

Today’s rare enforcement by the commission follows weeks of discussions between the two agencies — memorialized in commission letters on June 16 and July 3 — clarifying that interfering with plover nesting is illegal and raising concerns about allowing the beach to reopen to vehicles.

Oceano Dunes is managed by State Parks’ Off-Highway Motor Vehicle Recreation Division. The park includes about 1,500 acres of sand dunes where off-road vehicles are driven, and six miles of beachfront where driving vehicles on the beach is allowed and thousands of people camp. Every year vehicle use on the beach and off-roading in the dunes results in plovers being found run over.

Male plovers form nests by scraping holes in the sand where females then lay eggs. State Parks confirmed its staff had been “scuffing out” plover scrapes found in former off-road riding areas before the birds could mate and placing stakes with streamers in an attempt to deter nesting. State Parks also deployed graders and other heavy equipment on the beach near plover nesting areas, likely disturbing nesting birds. These actions violate the Endangered Species Act by harming and harassing protected plovers through interfering with breeding behavior.

Western snowy plovers are one of the most threatened shorebirds in North America and have been protected under the Endangered Species Act since 1993. Although plover numbers along the West Coast are slowly increasing and habitat conditions have improved, the plover population in the Central Coast overall is declining. Plovers are still threatened by loss of nesting habitat, predation and habitat degradation from development, recreation and sea-level rise. Other threats are disturbance by humans, off-road vehicles and off-leash dogs.

Snowy plovers breed at Oceano Dunes between March and September. Most individual birds return year after year to the same nesting spots, generally in flat, open areas such as beaches and sand spits. Many plovers remain at Oceano after the end of breeding season and throughout the fall and winter, where they are vulnerable to being run over by vehicles.

After the Fish and Wildlife Service warned State Parks in 2017 that it was violating the Endangered Species Act by allowing the harassment and killing of plovers at Oceano Dunes, the Center for Biological Diversity filed a notice of intent to sue the agency over harm to protected species.

For decades State Parks has delayed development of a promised habitat conservation plan to protect plovers and other endangered and threatened plants and animals at Oceano Dunes. State Parks released a draft “habitat conservation plan” this spring that would actually make conditions worse for snowy plovers, least terns and other endangered species. The draft plan prioritizes off-road recreation over the protection of wildlife, fails to address 15 areas of concern outlined by the Coastal Commission and proposes opening 109 additional acres of dunes habitat to off-road vehicles.