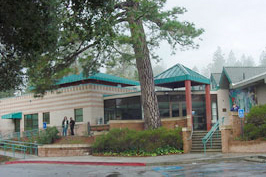 The 2019-2020 Santa Cruz County Civil Grand Jury made the following recommendation concerning the transition of Juvenile Hall in its report:

The overall purpose of the 2019-2020 Civil Grand Jury's report "Homelessness: Big Problem, Little Progress: It's Time To Think Outside The Box" was centered on, "understanding why, after spending tens of millions of dollars, the number of homeless remains high," according to the report. In addition, the Grand Jury, "sought to understand the extent of the homeless problem, and identify areas needing improvement," the report states.

The section of the report concerning the transition of Juvenile Hall is titled, "Who’s Not Sleeping In Those Beds?":

"Every year the Grand Jury is required to inspect the detention facilities in Santa Cruz County, and in January 2020, the Grand Jury inspected the Santa Cruz County Juvenile Hall in Felton. During that inspection the Grand Jury discovered the SCCO Juvenile Hall is following the state wide trend of lower youth incarceration rates. In California the youth crime rate has decreased so dramatically that from the first quarter of 2018 to the first quarter of 2019 the bookings in California Juvenile Halls decreased by 11%. In March 2019, 70% of California juvenile detention beds were unoccupied. This has led to other counties consolidating, closing, and reconsidering the future of their juvenile facilities.

"With a budget of nearly $5,000,000, a large facility with very low usage, and the trend toward consolidating juvenile halls and even closing them down, the Grand Jury suggests the County consider transitioning the use of SCCO Juvenile Hall and the surrounding property into a treatment and multi-faceted supportive services center for homeless individuals. The Grand Jury believes this would be a better use of resources and more appropriate than using the County Jail to house addicted and mentally ill individuals." 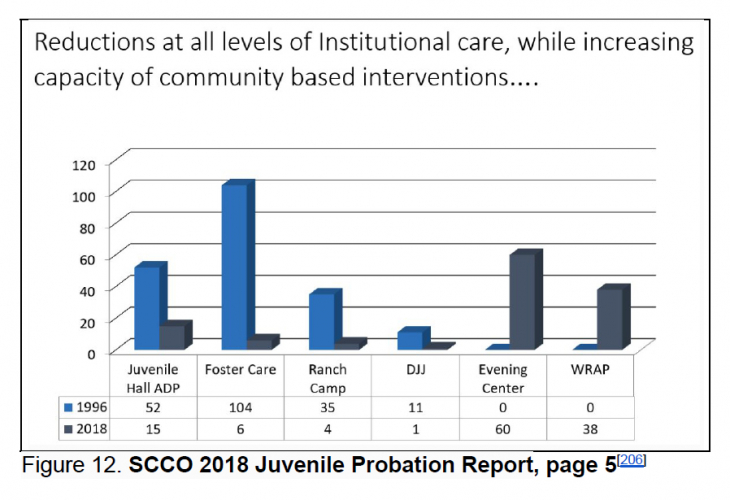 original image (898x615)
Photo from the report shows the decease in the rate of youth incarceration in Santa Cruz County, compared to the increase in community based interventions.
§Report: "Homelessness: Big Problem, Little Progress: It's Time To Think Outside The Box"
by Santa Cruz News
Wednesday Jul 8th, 2020 5:14 PM 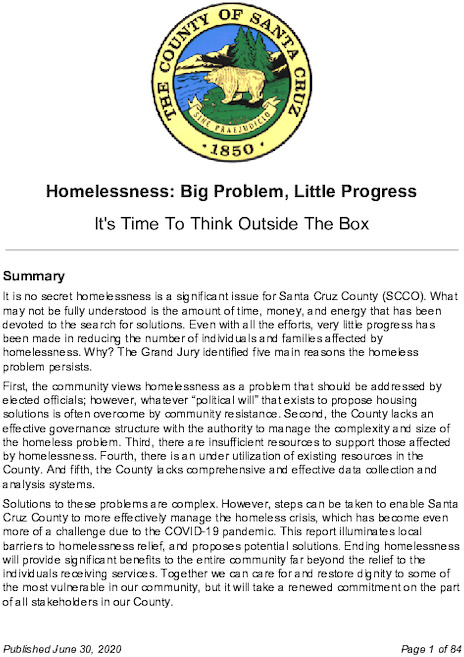 Download PDF (3.1MB)
Add Your Comments
Support Independent Media
We are 100% volunteer and depend on your participation to sustain our efforts!