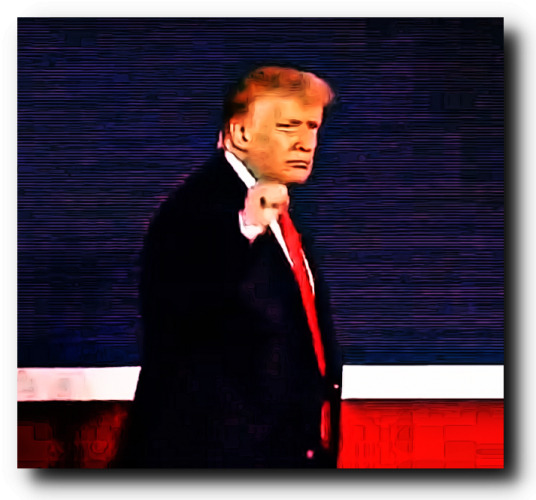 By Patrick Martin at the World Socialist Web Site


In his two speeches on July 3 and July 4, marking US Independence Day, Donald Trump launched into new diatribes against socialism and Marxism, appealing to his ultra-right supporters on an increasingly fascistic basis.

In his speech Friday night at Mount Rushmore in South Dakota, Trump sought to take advantage of the confusion spread by attacks on the statues and monuments to Abraham Lincoln, Ulysses S. Grant, and other heroes of the Civil War, as well as leaders of the American Revolution like George Washington and Thomas Jefferson, by posturing as a defender of the leaders of these two democratic revolutions.

But the substance of his appeal was diametrically opposed to the liberating democratic principles of the American Revolution and Civil War. His remarks were delivered barely a month after Trump went on national television to urge that the military intervene to suppress the mass protests against the police murder of George Floyd, in effect demanding the establishment of a military dictatorship in the United States, headed by himself.

Trump declared that “our country was founded on Judeo-Christian principles,” although the First Amendment to the Constitution established what Jefferson later called the “wall of separation” between church and state.

Trump went on to hail the “American family” (a signal to indicate his sympathy for the Christian fundamentalists), as well as “the solemn right and moral duty of every nation to secure its borders” (although America was founded as a nation of immigrants and adopted the “open door” principle for those seeking refuge). He reiterated his nativist slogans about “building the wall” and taking care of “America first.”

In his remarks Saturday at the White House, before a Fourth of July fireworks display introduced by flyovers from warplanes, Trump went even further, denouncing the “radical left” and “Marxists” as the enemies he was seeking to defeat. He attacked the millions who protested against the police murder of George Floyd in Minneapolis, calling them “the anarchists, the agitators, the looters, and people who in many instances have absolutely no clue what they are doing.”

Trump dropped his pretense of verbal sympathy for victims of outrageous police crimes, like George Floyd and Breonna Taylor, instead hailing the police and the military. He claimed that news media reports on his defense of monuments to the Confederacy, and his threat to veto legislation that would remove the names of Confederate generals from US military bases, were “dishonoring people fighting for freedom in the Civil War,” although those fighting on the Confederate side were, of course, fighting against freedom and for slavery.

In both televised speeches, according to press reports, Trump stuck closely to his prepared text—likely drafted by his chief fascist adviser, Stephen Miller—and read from a teleprompter in a grim and threatening tone of voice.

He concluded the Fourth of July event by announcing that he would seek to set up a “heroes garden” of statues of a mélange of public figures, some of them uncontroversial, like Benjamin Franklin and Frederick Douglass, others thoroughly right-wing, like the late Justice Antonin Scalia, preacher Billy Graham and President Ronald Reagan.

The actual text of the executive order, released by the White House, identified those to be honored in the proposed monument as “historically significant Americans” who included “opponents of national socialism or international socialism.”

In his only reference to the coronavirus pandemic that has killed 130,000 Americans in four months, while the White House sabotaged any effort to fight it systematically, Trump blamed the catastrophe on China, blasting “China’s secrecy, deceptions and cover-up that allowed it to spread all over the world, 189 countries. China must be held fully accountable.” He went on to claim that “we’ve made a lot of progress, our strategy is moving along well,” and that “99 percent of [cases] are totally harmless.”

This last statement was made at a time when the United States has broken all previous records for daily new infections, topping the 50,000 mark repeatedly, numerous states have rescinded previous reopening policies because of the upsurge in COVID-19, and public health experts have warned that cities like Miami, Houston, Phoenix and Los Angeles could soon be where New York City was two months ago, faced with a complete breakdown of their health care systems.

The Democratic Party response to Trump’s eruption was a combination of two reactionary tendencies: embracing the claim that race and not class is the fundamental dividing line in American society, and seeking to attack Trump from the right on foreign policy, portraying him as unduly conciliatory to both Russia and China.

In a 90-second commercial released on the Fourth of July, the presumptive Democratic presidential nominee, former Vice President Joe Biden, declared American history to be “a constant push and pull between two parts of our character, the idea that all men and women—all people—are created equal and the racism that has torn us apart.” This does not just elevate race above class, but utilizes race to blot out class divisions altogether, under conditions where the gulf between the financial aristocracy and the great mass of working people, black, white, Hispanic and immigrant, is greater than ever before.

A second commercial released by the Biden campaign two days earlier sought to outstrip Trump in China-bashing. The 150-second online video statement declared, “The uncomfortable truth is that President Trump left us vulnerable and exposed to this virus. He ignored the warnings of public health experts and intelligence agencies and put his trust in China’s leaders instead. And now, we’re all paying the price.”

It went on to accuse Trump of being “more worried about protecting his trade deal with China than he was about the virus that had already come to America,” and “trusting China with the health and safety of the American people.” It ended with Biden declaring, “I’ll demand an international investigation into the circumstances of the COVID-19 outbreak and China’s response.”

While Biden is beating the anti-China drums, his supporters in Congress and the media have used the bogus “Russian bounties” exposure, launched by the New York Times a week ago, to raise once again the claim that Trump is a stooge of Moscow.

https://www.wsws.org/en/articles/2020/07/0...
Add Your Comments
LATEST COMMENTS ABOUT THIS ARTICLE
Listed below are the latest comments about this post.
These comments are submitted anonymously by website visitors.