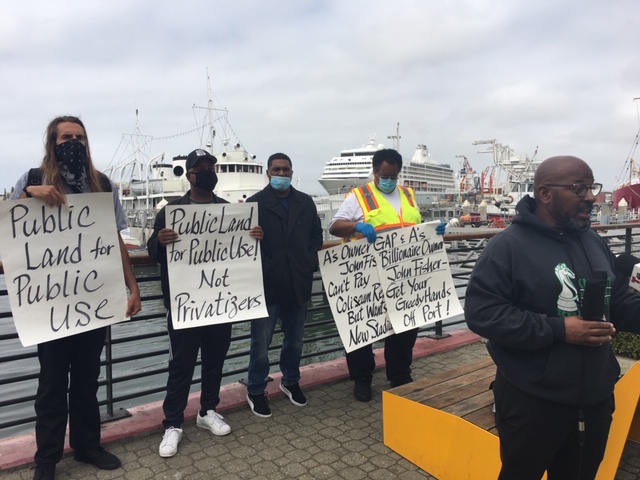 The ILWU reported that there has been a history of racial attacks and this latest attack came after the mass Juneteenth rally and march on June 19, 2020. The racist graffiti was put up days after Juneteenth.

They also talked about the history of racism and "Bloody Thursday" when two ILWU strike supporters were murdered by the police.

They also announced a rally and car caravan leading from SSA at 1717 Middle Harbor Road in Oakland on Sunday July 5, 2020 at 10:00 AM to commemorate the 1934 General Strike and to demand an end to the racist incidents.

This action was called by
The Committee To Stop Police Terrorism & Systemic Racism
http://www.juneteenthSPT.com
Production of Labor Video Project
http://www.laborvideo.org 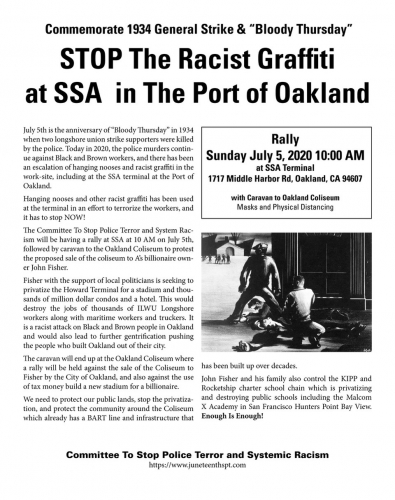 original image (960x1214)
The Committee To Stop Police Terror & End Systemic Racism is calling a rally and caravan starting at the SSA terminal in Oakland and going to the Oakland Coliseum which City of Oakland officials want to sell to racist Billionaire owner of GAP and A's John Fisher. He and his family are also trying to destroy the Malcom X Academy in Hunters Point/Bayview with a KIPP school that they run.
https://youtu.be/MzwJbWbVG5Q
§Billionaire John Fisher At A's Stadium
by Labor Video Project
Friday Jul 3rd, 2020 9:38 PM 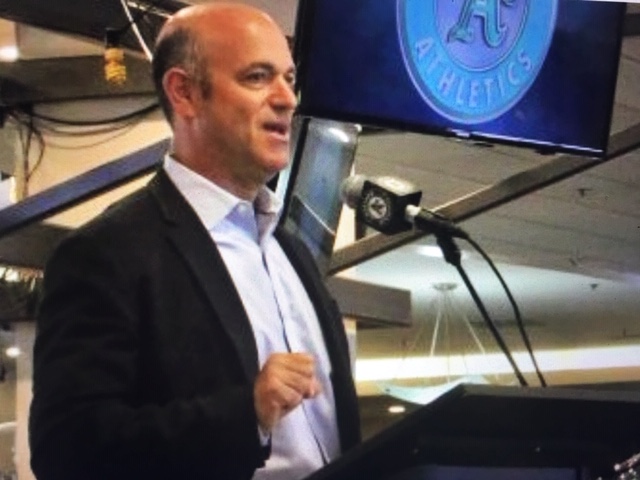 Billionaire GAP and A's owner John Fisher wants to grab public lands at. the Port of Oakland for thousands of million dollar condos, a Hotel and stadium that would destroy the working port of Oakland. He got Democratic politicians Ron Banta & Nancy Skinner to pass a bill in the legislature that would allow the use of tax money to build the infrastructure for his development project and stadium.
https://youtu.be/MzwJbWbVG5Q
§Greedy Hands Of John Fisher
by Labor Video Project
Friday Jul 3rd, 2020 9:38 PM 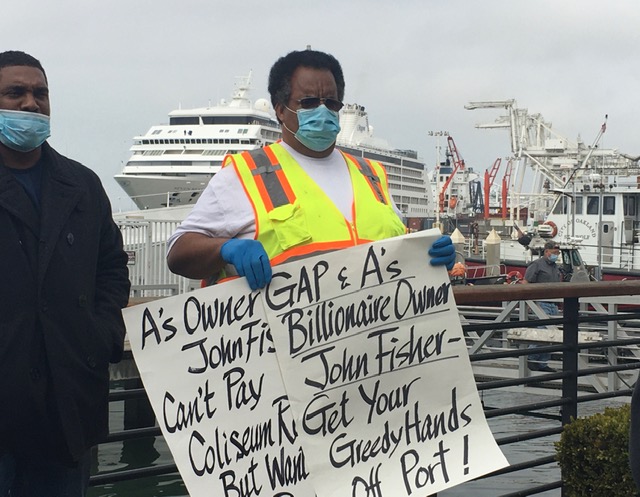 The GAP and A's owner John Fisher's greed for privatizing public lands has a long history in Oakland. While thousands are homeless in Oakland he wants the City to help him build a stadium for the rich.
https://youtu.be/MzwJbWbVG5Q
Add Your Comments
Support Independent Media
We are 100% volunteer and depend on your participation to sustain our efforts!