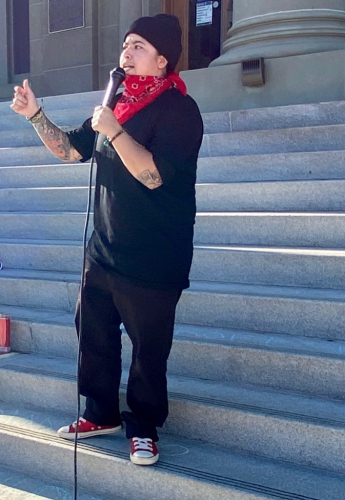 original image (673x975)
The Almanac is reporting that protesters’ voices have finally been heard after a 10 day hunger strike at San Mateo County’s Maguire Correctional Facility in Redwood City. Inmate Rodrigo Prieto and others in the jail fasted for 10 days. They started their hunger strike to demand an end to price gouging within the county's commissary system. They also called for expanded phone and video visitation access for inmates while their families are suffering under the pandemic on the outside. Family members have not been able to visit their loved ones in person due to county and state health restrictions.

On June 25, at a demonstration outside the jail, fiery local speaker in the anti-police brutality movement Missy got on the bullhorn giving great energy to a rally that included whistle blowing and banging of pots and pans. Missy speaks at local rallies of her own experience being harassed by the San Mateo County police and her time being incarcerated in the county system from a young age. She said that the hunger strikers were speaking with the only thing they have to use, their bodies.

The hunger strike began on June 16, when inmates at the Redwood City facility began their protest against arbitrarily high prices at the jail's shop commissary, where inmates purchase basic necessity hygiene items and the only food they have been getting besides the woefully inadequate prison meals. According to the Almanac the inmates' protest ended when their demands were met.
https://www.almanacnews.com/news/2020/06/2...
Add Your Comments
Support Independent Media
We are 100% volunteer and depend on your participation to sustain our efforts!