Add an Event
Newswire
Calendar
Features
Home
Donate
From the Open-Publishing Calendar
From the Open-Publishing Newswire
Indybay Feature
Related Categories: Central Valley | Health, Housing & Public Services | Police State & Prisons
Be a Witness of the City of Fresno’s Homeless Policy
by Mike Rhodes (mikerhodes [at] comcast.net)
Friday Jun 26th, 2020 10:38 AM
A shift in the City of Fresno's policy on homelessness is taking place and this article details how this will impact the homeless. 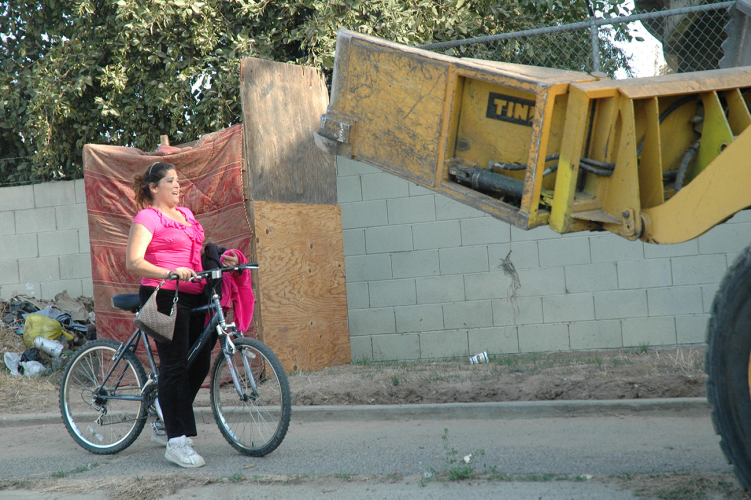 original image (1299x864)
The City of Fresno announced that it will conduct a “cleanup” (known to many as a demolition of a homeless encampment) on July 1 starting at 8 a.m. The targeted area is on Santa Clara Street, between E and G streets, in front of the Poverello House. If you want to witness for yourself the current city policy on the homeless, consider attending and see what your tax dollars are being used for.

Dez Martinez, with the grassroots community group We Are Not Invisible, and a formerly homeless person herself, says she was told that from now on city workers will conduct “cleanups” in the area. In the recent past, this has included bulldozing the encampment and throwing homeless people’s property into the back of garbage trucks. If a homeless person is not in physical possession of her/his tent, medications, sleeping bags, bikes and other things of value, it will be destroyed. I have witnessed a police officer in a tug of war with a homeless advocate who was protecting another person’s property (who had gone to the Poverello House to use the bathroom).

Martinez says the city has posted signs in the area saying that on July 1 it will “come through and clean out the whole camp.” And this will not be a one-time thing. Martinez says she was told by a city employee that “we are going to go back to our regular schedule of coming here every week and sanitizing the streets.”

Miguel Arias, Fresno City Council Member in District 3 (where the “cleanup” will take place) told me that he will be present on July 1 and do what he can to make sure homeless people’s rights are not violated. He added that this will only be a cleanup, which is badly needed.

Arias also said that the homeless encampment on Santa Clara Street has had an interesting relationship with the Fresno Police Department (FPD) in recent months that has resulted in multiple shootings, rapes and other criminal activity. The police, according to Arias, have had a hands-off approach to the encampment allowing it to grow and become more lawless. If you watched The Wire on TV, you might remember “Hamsterdam” (Season 3), which was a zone in Baltimore where the police department did not patrol. Not surprisingly, things did not end well using that strategy.

Fresno City Council Member Mike Karbassi in District 2 (northwest Fresno) told me that “being homeless is not a crime. But it is a complex issue with many causes and no easy solution. A major gateway to homelessness is a mental health condition. These folks need and deserve proper care. California must invest in a statewide mental health system offering inpatient and outpatient care. Dumping responsibility on counties and cities and relying solely on unmonitored outpatient care is not a solution. It only perpetuates the problem and gives no hope to those poor souls in a community like Fresno and others across California.”

I asked Martinez why homeless people don’t just go to a shelter and avoid the coming chaos on Santa Clara street next month. A couple of months ago, there had been talk about low-barrier shelters in Fresno and Mayor-Elect Jerry Dyer had proposed having a big tent that would hold 200 homeless people. Arias says that homeless people who are living in the cleanup area will be given the opportunity to move into a shelter.

Martinez said that the city simply does not have enough shelter beds for all the homeless in Fresno. She said the Dyer proposal did not happen and, in her opinion, “hopefully will not happen when he becomes mayor. This is something I’m against for the simple fact that I’m a domestic violence survivor that experienced homelessness as a result of a lack of the resources we have in Fresno. I would choose not to go to a shelter that has 200 people because there could be someone facing charges of domestic violence inside.”

Other reasons why homeless people do not enter a shelter is fear of the lack of social distancing, having to leave their property behind and the freedom to come and go as you wish. Martinez added, “We’re not animals, they shouldn’t cattle us all together in one area. We’re all different and we all have a different story.”

In addition, some homeless people don’t go to shelters knowing that if they enter one they will have to leave some of their property behind and that staying in a shelter is not permanent. Eventually, they will be back on the street and have to find a tent, a sleeping bag and other essentials.

With the millions of dollars coming to Fresno to address homelessness, Martinez and homeless people I have talked to are confused about where all the money goes. One place we know it goes is to the FPD Homeless Task Force (HTF; about $1 million a year) and to the FPD general fund, which spends more than $9 million on “service calls to address homeless.”

The amount of funding the FPD HTF will receive in the next fiscal year is being discussed now at City Hall. There is a proposal to cut all funding, but Arias told me the FPD could, even if funding was cut to the HTF, redirect funds it receives from the General Fund and use that to maintain the HTF. Ultimately, the FPD might have to be specifically directed to eliminate that unit.

Earlier this year, the Community Alliance reported a story about a homeless man being brutally beaten by FPD HTF members. The man, whose name is Lewis Brown (known on the streets as Dreamer), was taken to Community Hospital where he was treated, turned over to police custody, booked at the County Jail and released. The nurse who was cleaning his wounds said, “I’m tired of seeing the police do this.”

You can read the full story here: https://fresnoalliance.com/fresno-police-officers-assaulted-homeless-man/

A lawsuit against the city is “pending filing at this point,” according to attorney Kevin Little. We can spend our tax dollars on the police who beat (rather than help the homeless), lawsuits against the city for violating homeless people’s civil and human rights or we can spend our money on housing, medical care, job training and social services.

If you are interested in working with We Are Not Invisible, learn more at https://wanif.org/tag/fresno/.

Two other groups working to improve the lives of Fresno’s homeless are the Dakota EcoGarden (https://ecovillagefresno.org/dakotaecogarden/) and Wings (https://www.wingsfresno.org), whose volunteers serve Fresno’s homeless, providing them with what they need to end their life on the cruel streets of Fresno.
*****
Mike Rhodes is a writer for the Community Alliance newspaper and the author of the book Dispatches from the War Zone: Homelessness in Fresno 2002‒2015. Contact him at mikerhodes [at] comcast.net. 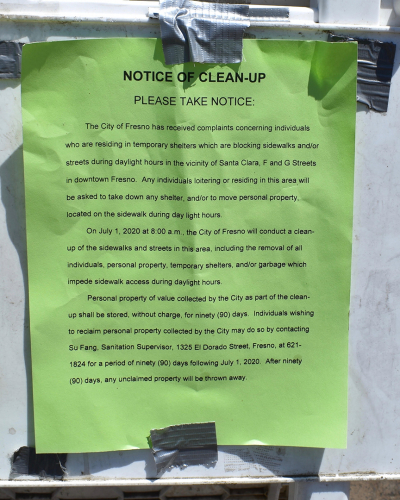 original image (864x1080)
Signs are up on Santa Clara Street outside of the Poverello House that a “cleanup” (demolition) will take place on July 1. What a great way to kick off the 4th of July festivities.
§This is How the City of Fresno does a "cleanup."
by Mike Rhodes
Friday Jun 26th, 2020 10:38 AM 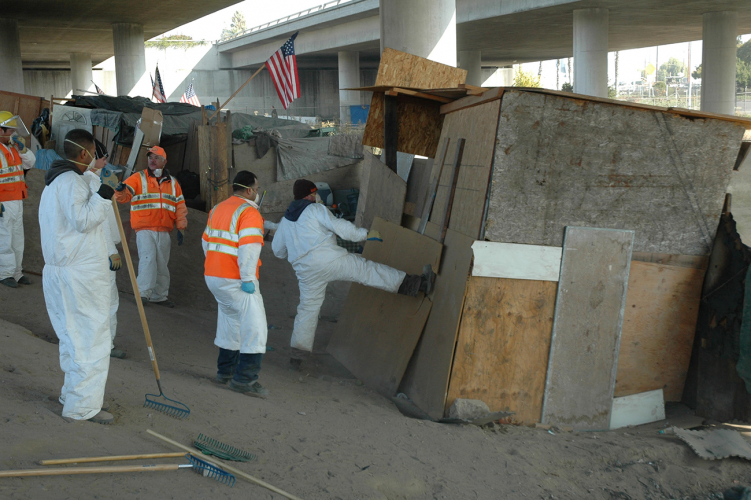 original image (1299x864)
After her shelter was destroyed, the woman who lived there died on the streets of Fresno.
§Destroying a Homeless Person's Tent
by Mike Rhodes
Friday Jun 26th, 2020 10:38 AM 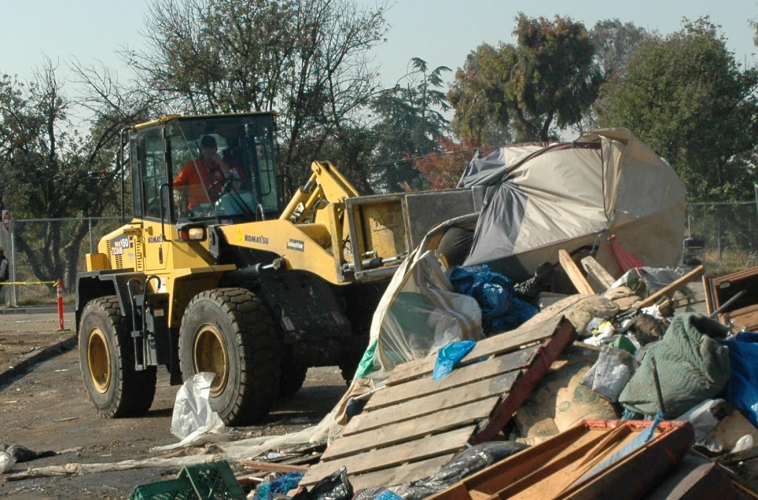 original image (1310x864)
This is what previous “cleanups” have looked like. You are encouraged to come and witness what the City of Fresno’s policy on homelessness is and how they are spending your tax dollars.
§Street View of Sign
by Mike Rhodes
Friday Jun 26th, 2020 10:38 AM 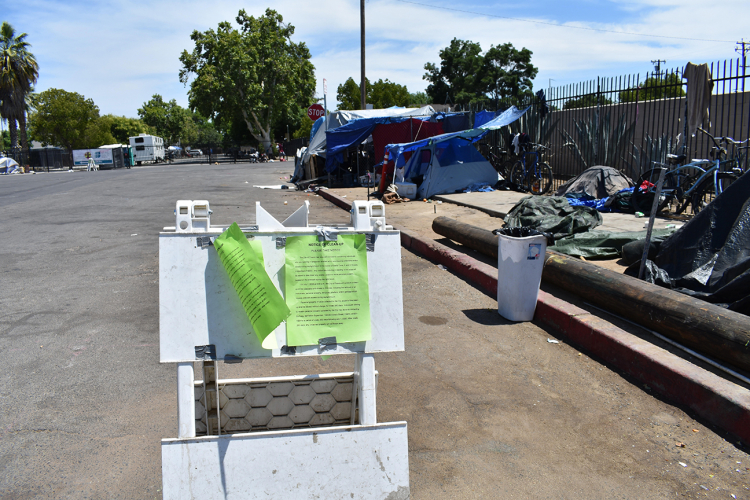 original image (1296x864)
This is the view on F Street looking toward the Poverello House, which is supposed to be a sanctuary for the homeless.
Add Your Comments
Support Independent Media
We are 100% volunteer and depend on your participation to sustain our efforts!