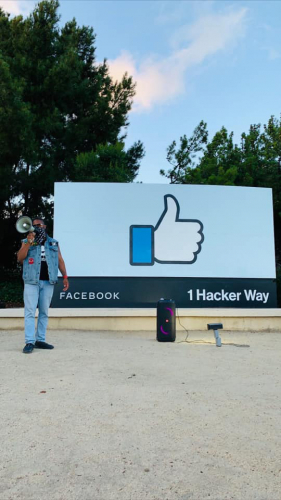 original image (540x960)
In 2017 Facebook offered a $11.2 million donation to Menlo Park police on the condition that they make a a new precinct in the city's Belle Haven neighborhood. Self-serving, of course, because that neighborhood abuts Facebook’s campus.

Facebook aggressively pushed for Menlo Park to expand its police force, despite strong opposition from communities of color at the time. Residents of adjacent East Palo Alto said that Facebook's offer would aid in the criminalization of their city as well as Belle Haven's because increased policing would lead to racial profiling.

With the national movement to defund police, activist group "Tha Hood Squad" is spurred anew to call out Facebook for its total lack of true concern for the welfare of its neighbors. While people of color are underrepresented in the technology sector, they are also pushed out of the area thanks to Facebook-caused gentrification. What the neighborhoods of Belle Haven in Menlo Park and all of East Palo Alto need is less policing not more, say anti-racism activists.

This is the second time this month that hundreds of protesters demanded Facebook stop funding local police by marching on the social media giant's headquarters.

https://onezero.medium.com/blm-protestors-...
Add Your Comments
Support Independent Media
We are 100% volunteer and depend on your participation to sustain our efforts!