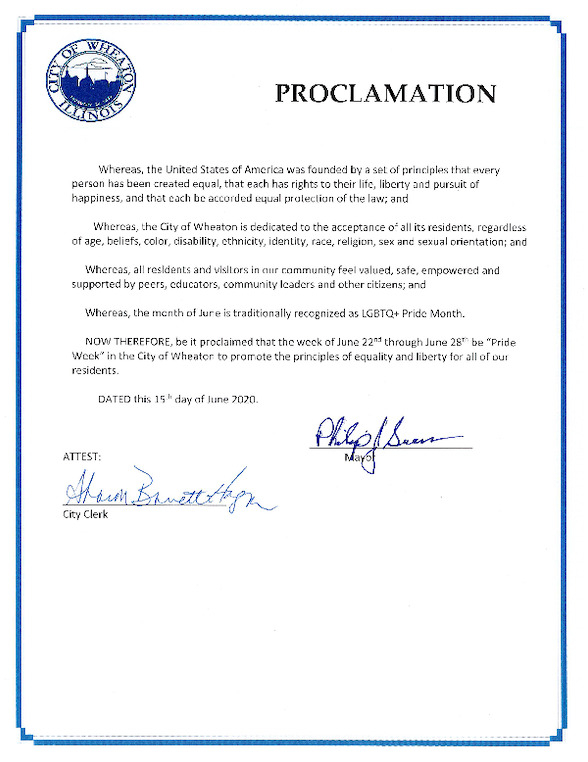 In a bizarre political fiasco, Philip J. Suess, Mayor of Wheaton, Illinois, a suburban town around 25 miles west of Chicago, signed a Pride Week proclamation on June 15, 2020, that partially says, “Now Therefore, be it proclaimed that the week of June 22nd through June 28th be “Pride Week” in the City of Wheaton to promote the principals of equality and liberty for all of our residents.

In contrast, according to the records with the Federal Election Commission (FEC), Philip J. Suess, the Mayor of Wheaton, gave a $1,000 campaign contribution to a committee of Jeanne Ives, called Jeanne for Congress, around 09/30/2019.

According to Wikipedia, “In March 2013, Ives stated in an interview that same-sex marriages are a "completely disordered relationship" and said LGBT people were trying to "weasel their way" into acceptability. She said she was opposed to the issue of homosexual marriage."

Additionally, according to Wikipedia, “Gay marriage later passed the Illinois General Assembly, with Ives saying of the final bill, "The fact is that this bill is the worst in the U.S. for protecting religious liberty." Jeanne Ives also voted against a ban on gay conversion therapy. For more on Jeanne Ives, feel free to click here…

When Mayor Philip J. Suess signed the Pride Week Proclamation, he failed to mention in the proclamation that around 8 months earlier he was a proud supporter of Jeanne Ives, and made a $1,000 campaign contribution to the campaign committee of Jeanne Ives.

Wheaton, Illinois is the hometown of John and Jim Belushi, and Wheaton is also the town where famed journalist Bob Woodward used to live before he helped to bring down Tricky Dick (Richard Nixon) for the Watergate burglary scandal that plagued the Nixon regime.

The last time I saw Jim Belushi was when he picked me up in a Volkswagen beetle while I was hitch hiking on Roosevelt Rd., in Wheaton, heading to Chicago, and Jim was heading to Second City Theater in Chicago at the time.

>>>>>>
>>>>>>
Related Categories: U.S. | LGBTI / Queer
Add Your Comments
Support Independent Media
We are 100% volunteer and depend on your participation to sustain our efforts!