Add an Event
Newswire
Calendar
Features
Home
Donate
From the Open-Publishing Calendar
From the Open-Publishing Newswire
Indybay Feature
Related Categories: Santa Cruz Indymedia | Police State & Prisons
Defunding the Police: An Idea Whose Time Has Come
by Steve Pleich (spleich [at] gmail.com)
Tuesday Jun 16th, 2020 8:55 AM
Nothing is More Powerful Than an Idea Whose Time Has Come 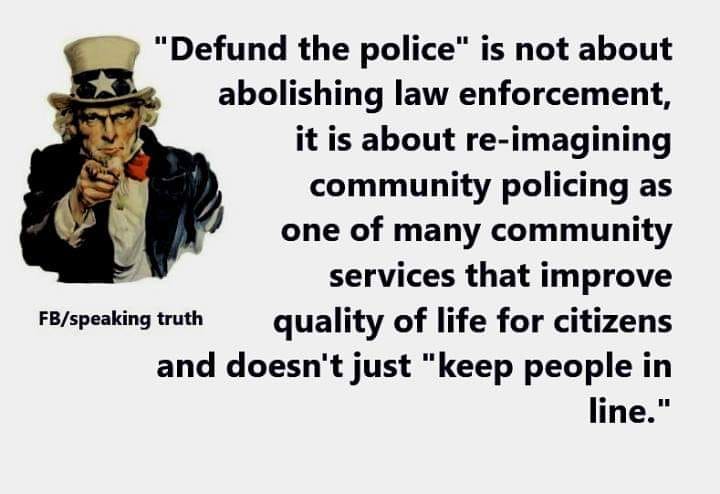 As a resident of Santa Cruz, it has been my privilege to serve for the last two and a half years as a member of the Chief’s Advisory Committee and to have worked closely with our Chief Andy Mills. And while I do not speak for the committee, I believe that my experience working with the chief and the department has given me a unique perspective on policing in our community. I will say in preface that, in my experience, we are fortunate to have a police force that is neither historically brutal nor notably resistant to modernization and change. But change is most certainly at hand in our community and in our nation so I offer this commentary in that spirit.

In the wake of the tragic events in Minneapolis and the national outcry for law enforcement reform, much is being written and said about the need to take a new and harder look at revising traditional policing policies and procedures. But as well intentioned as those approaches may be, they are only addressing the symptoms of the problem rather than taking the bolder steps necessary for systemic change. In point of fact, de-escalation trainings and the deployment of body cameras have not resulted in the changes our community is now demanding. What is now called for is the more direct approach of revisiting the law enforcement paradigm itself with a view toward substantively changing the model.

There's a growing sentiment that Americans can survive without law enforcement as we know it and that the solution to police brutality and racial inequalities is simple: just defund police. Indeed, Minneapolis officials announced their intent to defund and disband the city's police force altogether. As startling as this statement seems at first blush, it is as basic, direct and up front as it sounds. Instead of funding a police department, a sizable chunk of a city's budget would be invested in communities. Those dollars can be used to fund mental and behavioral health services, substance abuse prevention and housing and homelessness; all things we know increase public safety. This approach is especially relevant to marginalized communities, i.e., communities of color, where policing and police brutality occurs more frequently and where much of current policing occurs.

But defunding in the broader sense also means dismantling the idea that police are "public guardians" meant to protect communities. The plain fact is that people of color do not feel protected by their police. Indeed, police disproportionately use force against people of color people and people of color are more likely to be arrested and sentenced. Supporters of defunding also suggest that it may have the unintended though equally beneficial result of reducing the ability of departments to acquire the type of militaristic “warrior cop” equipment that create additional tension in virtually every citizen/police encounter simply by their presence. So how do we begin this work?

Our police department currently employs about 140 people, roughly 100 of whom are sworn officers. Of our approximately $110 million dollar General Fund Budget, the SCPD is allocated about $30 million. Rather than wholesale defunding of our department, I recommend reducing the number of sworn officers by 30%. I believe this could be accomplished in the near term through retirement and normal employment attrition. A portion of that savings in salary and benefits could be redirected back into the community through existing social services programs. But a significant portion would fund the hiring of Community Service Officers; citizens with knowledge of and sensitivity to our community. I believe this is the key element in revisioning policing in our community.

So let this be a call to action for our elected and law enforcement leaders, those who manage our civic government and the community as a whole. Working together, we can proactively take a giant stride toward an end to police brutality, institutionalized racism and the wasted lives that are the product of a system long overdue for change. Let that change begin here and now.