Abolition is the Floor Not the Ceiling

by Gay Shame (gayshame [at] riseup.net)
It is important to remember that institutional violence flows not merely from the bullets of the police but in fact moves through all elements of the social fabric. 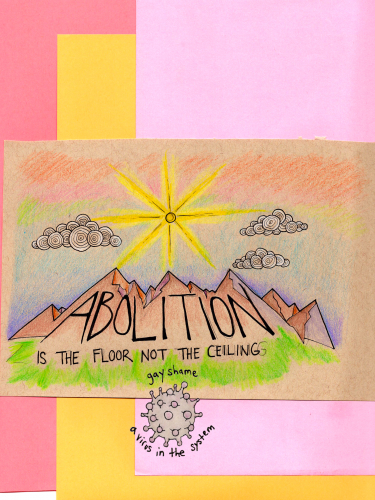 original image (2496x3324)
ABOLITION IS THE FLOOR NOT THE CEILING

It is important to remember that institutional violence flows not merely from the bullets of the police but in fact moves through all elements of the social fabric. The formal, municipal police forces are just the tip of the iceberg when it comes with dealing with and understanding the militaristic terror inherent to the capitalist white settler colony we live under. The police protect private property and property values, and there are many establishment incentives to help real estate interests make money while undermining the safety of renters and other inhabitants and non-owners of capital/property. Newly houseless due to a multi-agency cabal, one is left vulnerable to policing that only serves to preserve commercial business space where there was once a relative degree of open public life — and it is clear that the eclipse of that relative freedom to enjoy open space over recent decades is the expression of the fact that it is too much for the settler colony to withstand so long as there is the potential to valorize further profit by financializing all public space. Elites want rapid response graffiti and un-housed person removal at the end of a 911 dial, where these modes of reclaiming the public are the few outlets available to historically disenfranchised groups. Rather than sharing space for community investment or simply space for relaxed civic life. What’s happening are people mobilizing on a variety of fronts.

During this moment of critical movement building, mobilization and resistance, we observe and put forward the following:

• Figure heads and brand ambassadors will emerge as representatives of the “community” but what they actually represent is the State’s desire to kill the rebellion and restore white order, and the willingness of dangerous actors to play the role of covert wet blanket deflectors.

• The “outside agitator” story is racist as hell. It argues that Black people are easily duped and controlled by white people and also denies Black rage and the exercise of Black collective political agency as a strategy of survival and liberation from burning the plantation to the percent.

• Black Mayors are not Black Liberation.

• Reformists in dusty blue vests have suggested reforms that get their wack non-profits funding while ensuring Black death. Body cameras don’t stop bullets and being murdered after a warning is no less deadly.

• The feminist, trans, queer dimensions of police murder must not be erased. We have to escalate our collective responses to the murders of Black trans, cis and/or queer women and people. The inscription of masculinity & patriarchy (e.g., the loss of black fatherhood) as both the primary victim as well as the savior within conversations of resisting state violence are another tactic to keep us: divided, suspicious of & un-empathetic to one another, passive to and enamored with authoritative (often abusive) celebrity figureheads, and unaware of the scope of state violence which is fundamentally a (cis-)gendered sexual violence.

• Gentrification is a form of Black terror. We have all seen the “Black Lives Matter” signs on luxury condos where Black people were evicted. Displacement is murder by other means and must be fought with the same fierceness. Avenge Iris Canada.

• Defunding the cops is necessary. But it can also become a trap because the state will gather behind “defunding” to front like they are making material changes while not doing shit. Did they just reclassify police activity to slide it under the Parks Department’s budget? Did they take money from affordable housing to pay for useless “diversity and inclusions” trainings?

• Don’t kneel, hug, or march with cops, ever. This is a tactic they are successfully using to diffuse the necessary intensity of the uprising. They are not your friends.

END_OF_DOCUMENT_TOKEN_TO_BE_REPLACED
Related Categories: San Francisco | LGBTI / Queer | Police State & Prisons | Racial Justice
Add Your Comments
Support Independent Media
We are 100% volunteer and depend on your participation to sustain our efforts!