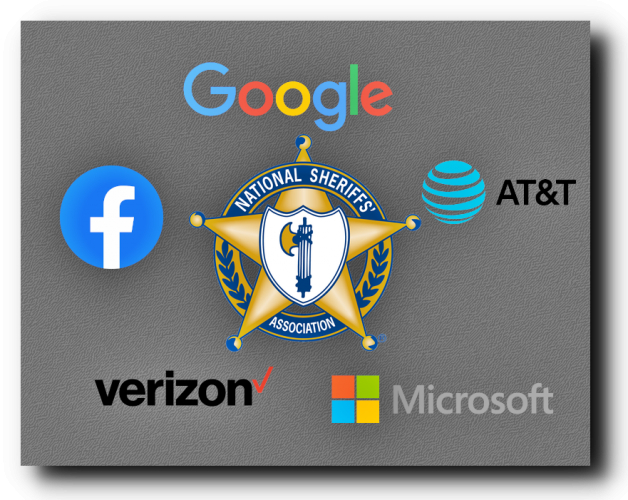 Over the past week, tech firms from Silicon Valley to New York City have issued statements expressing sympathy for the mass protests around the world demanding an end to police violence and racism. These statements have included financial contributions of millions of dollars to civil liberties organizations and social justice causes.

While they are now publicly expressing support for millions of people demanding genuine equality, the truth is that the tech corporations are an integral part of the militarization of the police that has developed over the past two decades. Moreover, the high-tech apparatus of repression which they have actively helped develop has been unleashed against protesters since George Floyd was murdered by Minneapolis police officers on Memorial Day.

A case in point is the role of the telecom corporations Verizon and AT&T, which issued statements last weekend pledging support for “diversity and inclusion” and “equality and inclusivity,” while they both are funding a group dedicated to militarizing local police and working with the security state to expand secret warrantless surveillance of the public.

According to a report in the anti-corruption website Sludge on June 4, Verizon and AT&T are “platinum partners” of the National Sheriff’s Association (NSA), a lobbying group based in Alexandria, Virginia, and founded in 1940.

The Sludge report notes, “The two largest US telcos are among the most prominent corporations that partner with NSA. Verizon is also one of NSA’s three ‘diamond partners,’ the group’s top corporate partnership tier, entitling it to a private dinner with the NSA Executive Committee. ‘This intimate setting will give you coveted time with the key policy makers within the organization,’ a brochure reads.”

A key objective of the National Sheriff’s Association is to make permanent the 1033 Military Surplus program that allows civilian law enforcement agencies to acquire weapons and equipment from the federal government that were originally designed for warfare.

As the Sludge report explains, “Under the Department of Defense’s 1033 program, state and local police are able to obtain Mine-Resistant Ambush Protected Vehicles (MRAPs), grenade launchers, helicopters, unmanned aerial and ground vehicles, bayonets, and other weapons of war. State and local law enforcement currently hold $1.75 billion worth of military equipment that they acquired through the program.”

The 1033 program was initiated in 1997 during the Clinton administration and is run by the Defense Logistics Agency which approves the transfer requests from local police departments and delivers the equipment to them. The program was accelerated as part of the attacks on democratic rights within the US in the years following the terror attacks of September 11, 2001.

Some estimates put the value of the military hardware transferred over the years at $7.4 billion. One particularly relevant example of the ways the 1033 equipment can be used in the present situation against protesters is the acquisition by city of Santa Maria, California, of a Long Range Acoustic Device (LRAD), a so-called “sound cannon” designed to disperse crowds by blasting a loud, painful noise.

According to the Sludge report, in 2012, Verizon outfitted a Humvee acquired by the National Sheriff’s Association with mobile technology that allows police “to access records and manage paperwork in the ﬁeld, tap into video surveillance prior to arriving at a crime scene, communicate with dispatch and more.”

Another of the NSA’s legislative priorities is opposition to reforming the Electronic Communications Privacy Act (ECPA), a federal law that allows police to obtain communications records from telecom corporations like AT&T and Verizon without a warrant. According to information on the lobbying group’s website, “NSA recognizes the increasing threat that ‘going dark’ has on their ability to effectively and efficiently obtain potentially life-saving digital materials.”

As demonstrated by former intelligence contractor Edward Snowden, the collaboration of Verizon and AT&T with warrantless 24/7 government surveillance of electronic communications is well-established practice. Given these exposures, it makes perfect sense that the telecoms are supporting lobbying groups like the NSA which are in favor of legalizing warrantless electronic surveillance of the public.

The Sludge story substantiates that such illegal surveillance is ongoing by pointing to Project C, also known as Hemisphere, in which “AT&T maintains and analyzes billions of domestic and international call records that pass through its networks and makes information available without a court order to the Drug Enforcement Agency and several other law enforcement organizations.”

Other examples of tech companies collaborating with advanced law enforcement methods that violate basic rights are the use of facial recognition technologies linked to a national database of face images, the use of geolocation information on mobile devices to pinpoint the whereabouts of individuals and the tracking of conversations on social media based on keyword searches.

Whatever the professed opinions of individual corporate executives regarding police murder and racial discrimination in the US, the foundation of both inequality and the militarization of law enforcement is the capitalist system. The integration of the US tech industry with the police and the intelligence state has been escalating over the past two decades along with the growth of US imperialist wars in the Middle East and Africa.

Under capitalism, the most advanced technical accomplishments—regardless of their potential to improve and extend the lives of billions of people all over the world—are subordinated to the drive for profit and ultimately used as instruments of repression and war. The fight against the high-tech militarization of law enforcement as well as police brutality and murder are inseparable from the struggle of the working class for the socialist reorganization of society and the planned use of science and technology for human need and not profit.