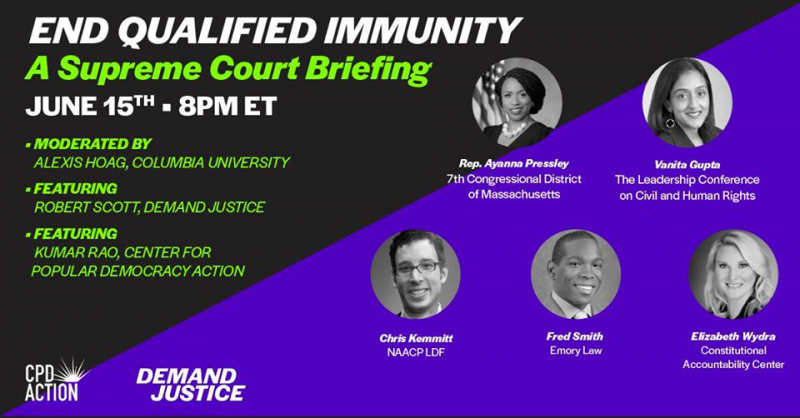 This country has a serious, deadly, and racist police brutality problem, but even in the most extreme cases officers are rarely held accountable -- in part because of Qualified Immunity, a doctrine created by the Supreme Court decades ago. In practice, Qualified Immunity makes it nearly impossible for victims of police violence to hold officers accountable for even the most egregious misconduct. It also makes systemic change less likely by insulating cities and states from paying for their failures to prevent violence.

Qualified Immunity has to end, and it has to end now!

This Monday (June 15) at 5 PM PT (8 PM ET), join Rep. Ayanna Pressley and leading advocates and experts from the Leadership Conference on Civil and Human Rights,
NAACP Legal Defense and Educational Fund, Emory Law, Columbia University,
Constitutional Accountability Center, Center for Popular Democracy, and Demand Justice
for a conversation about Qualified Immunity -- and what we can do as we work to end this Supreme Court-created doctrine.

This conversation is the fifth in a series of digital roundtables about the threat posed by the Supreme Court to our democracy and our rights. This series brings together policy experts, elected officials, and activists on the front lines to explain what's at stake and what we can do
to fight back, even from our couches.

END_OF_DOCUMENT_TOKEN_TO_BE_REPLACED
Added to the calendar on Sat, Jun 13, 2020 8:09AM
Add Your Comments
Latest Comments
Listed below are the latest comments about this post.
These comments are submitted anonymously by website visitors.
TITLE
AUTHOR
DATE
DIRECT LINK TO LIVESTREAM
Demand Justice
Support Independent Media
We are 100% volunteer and depend on your participation to sustain our efforts!