Statement in Support of #8toAbolition

The National Lawyers Guild (NLG) supports the #8toAbolition campaign, which builds on decades of work by Black feminist abolitionists to demand an end to policing and prisons, and community investment that prioritizes the lives and safety of Black people. 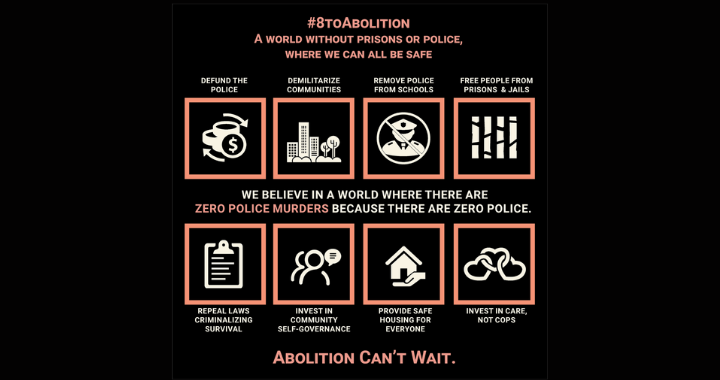 8 to Abolition was created by BIPOC police and prison abolitionists as a response to the reformist changes of the #8CantWait campaign, that merely seek to reduce, instead of eliminate, continuing police violence against Black people.

As the 8 To Abolition website states: “As police and prison abolitionists, we believe that this campaign is dangerous and irresponsible, offering a slate of reforms that have already been tried and failed, that mislead a public newly invigorated to the possibilities of police and prison abolition, and that do not reflect the needs of criminalized communities… Abolition can’t wait.”

The NLG supports the eight demands of the 8 to Abolition campaign:

The NLG is an explicitly abolitionist organization. In 2015, the NLG passed a resolution that calls for the “dismantling and abolition of all prisons and of all aspects of systems and institutions that support, condone, create, fill, or protect prisons.” The NLG understands that reforms are not enough and the principles of 8 to Abolition are consistent with the those that have been adopted by Guild membership.

“The carceral state builds on this country’s history of slavery and colonization and is intrinsically intertwined to all systems where people are held against their will through coercion, force, or threat of force. As such, we call for the abolition not just of prisons and jails, but also police lock­ups, juvenile detention facilities, immigration detention facilities, and hospitals or nursing homes where people are held against their will,” said NLG Executive Director Pooja Gehi.

8 to Abolition also acknowledges that abolition is a disability issue. “Half of the people killed by police are disabled. The intersection of Blackness and disability means that Black disabled people are especially likely to be victims of state violence, including through police, incarceration, mental health facilities, and other institutions,” NLG Disability Justice Committee co-chair Katie Tastrom said.

The NLG is grateful for the work of the 8 to Abolition authors and the Black feminist abolitionists who paved the way for this moment and who continue to lead the police and prison abolition movement.

The National Lawyers Guild, whose membership includes lawyers, legal workers, jailhouse lawyers, and law students, was formed in 1937 as the United States’ first racially-integrated bar association to advocate for the protection of constitutional, human and civil rights.

END_OF_DOCUMENT_TOKEN_TO_BE_REPLACED
Related Categories: U.S. | Racial Justice
Add Your Comments
Support Independent Media
We are 100% volunteer and depend on your participation to sustain our efforts!