Add an Event
Newswire
Calendar
Features
Home
Donate
From the Open-Publishing Calendar
From the Open-Publishing Newswire
Indybay Feature
Related Categories: U.S. | Global Justice & Anti-Capitalism | Health, Housing & Public Services | Labor & Workers
Growing anger among US workers as COVID-19 rips through workplaces
by Tom Hall and Jerry White (WSWS Repost)
Thursday Jun 11th, 2020 9:45 AM
A mood of anger and opposition is taking hold among meatpacking workers in Utah, sanitation workers in Philadelphia, and automakers and health care workers in Northern California. Where will it strike next? 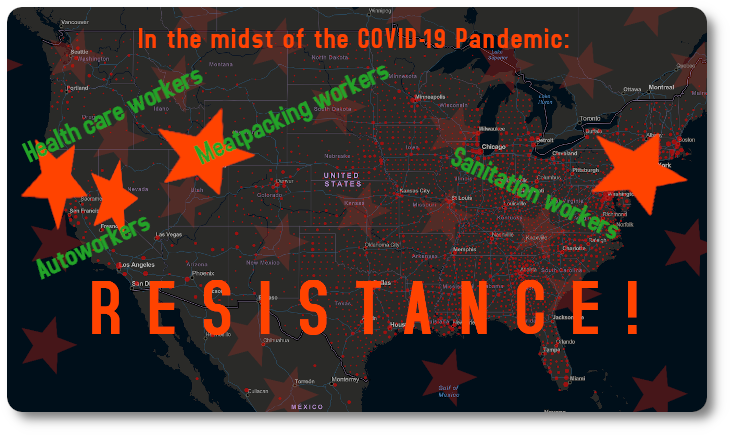 Growing anger among US workers as COVID-19 rips through workplaces


Manufacturing facilities, warehouses and other large workplaces in the United States continue to be major vectors for the spread of COVID-19, with the number of infections and hospitalizations rising sharply in many areas of the country. In their reckless rush to reopen the economy and restart the flow of corporate profits, the Trump administration and state and local authorities from both parties have all but abandoned any public health measures to contain the virus.

Driven by the premature back-to-work push by US corporations, a mood of anger and opposition is taking hold within the working class in the United States. This is merging with outrage over the police murder of George Floyd, massive levels of unemployment and economic insecurity, and demands by corporations, including many that received government bailouts, for wage and benefit cuts. In recent days, health care workers have joined the demonstrations, aiding injured protesters. Public transit workers in New York City—where 150 co-workers have died of COVID-19—and other cities have refused to transport cops and protesters arrested by the police.

The strikes, job actions and other protests by workers in the US are part of a growing international wave of struggles, from German meatpacking workers and Polish coal miners in Silesia—who make up 10 percent of the country’s COVID-19 cases—to Bridgestone tire workers in Brazil and Panamanian workers who struck against the reopening of the economy.

Hundreds of meatpacking workers in Logan, Utah demonstrated Wednesday afternoon to demand the closure of their facility, operated by Brazilian conglomerate JBS. The workers are also demanding that they be compensated for time off during the shutdown.

At least 287 at the facility, or more than 20 percent of the total workforce, tested positive during a screening held on the weekend of May 30. This is possibly the largest single outbreak in the state, according to the Salt Lake Tribune.

Meatpacking plants, where highly exploited workers are crowded onto often unsanitary assembly lines with no chance of social distancing, have been transmission points for the spread of the virus from major industrial centers to more rural or sparsely populated areas. There are over 20,400 cases in 33 states tied to meatpacking plants, with at least 74 deaths, according to the Midwest Center for Investigative Reporting.

Because many meatpacking workers are undocumented immigrants fearful of being deported, many cases in the industry likely go unreported. The Trump administration has intervened to force meatpacking plants to remain open during the pandemic, while several states have moved to protect meat processing and other companies from legal liability for sickening and killing workers.

To date, the Occupational Safety and Health Administration (OSHA), the federal agency tasked with overseeing workplace safety, has issued only one citation for COVID-19-related violations even though thousands of workers around the country have filed camplaints about unsafe working conditions. Even meat inspectors from the US Department of Agriculture, hundreds of whom have contracted the virus and at least one who has died, are reportedly terrified of entering the country’s meatpacking plants, where even minimal social distancing measures have not been taken.

Nearly 60 Philadelphia sanitation workers have tested positive for COVID-19 and another 50 have self-quarantined after being exposed, according to local union officials. The city’s 1,100 sanitation workers, whose median salary is $36,000, face the constant threat of infection as they collect trash from the hundreds of thousands of households and businesses in the city of 1.5 million.

“Our conditions are real bad,” Durrell Rothwell, a sanitation worker who contracted the disease from a coworker and then passed it on to his own son, told the rally. “They haven’t given us the proper tools to protect ourselves. We have to get our own masks, our own gloves, our own everything. For them to not give us hazard pay at least during this pandemic is ridiculous,” Rothwell said, according to local media.

Workers are also angered by Democratic Mayor Jim Kenney’s proposed budget, which includes cuts of $18.5 million to the Streets Department. Prior to the rally, Streets Commissioner Carlton Williams sent out a letter to sanitation workers threatening them with dismissal if they did not show up for work. “[U]nauthorized absences,” the letter read, “will result in disciplinary action, up to and including termination.”

Many sanitation workers carried signs reading “PPE, not PPD [Philadelphia Police Department],” drawing a connection between the endangerment of workers on the job by the government and the police riots against demonstrations protesting police brutality.

The Philadelphia protest was only the latest in a string of actions by sanitation workers throughout the country. Over the last several days, a small group of sanitation workers in Tuskegee, Alabama have been protesting daily outside City Hall during their regular work hours to demand pay increases and PPE. Workers for waste disposal contractors in the city of New Orleans struck over the same demands. The city responded by replacing them with prison laborers earning less than minimum wage.

After wildcat strikes forced a halt to production in mid-March, the automakers prepared a return to work with a media blitz, fully supported by the United Auto Workers union, which touted the wholly inadequate safety measures being adopted after over two dozen autoworkers died.

Reports of new infections in the plants began as soon as production reopened on May 18. Management at the Elon Musk-owned electric carmaker Tesla, which defied local lockdown orders to reopen its massive plant in northern California last month, has admitted to workers that there have already been several confirmed cases at multiple facilities. Industry outlet Automotive News admitted this week that testing by the companies has not been on a scale sufficient to identify new infections.

Hundreds of workers on every shift are calling off due to concerns about contracting the disease, compounded by underlying health conditions and the unbearable heat, which makes it even more difficult to work with a mask on. A worker at the Sterling Heights Assembly Plant in Detroit told the WSWS, “They are working our butts off and want more overtime. The safety measures are being abandoned. They are acting like everything is back to normal.

“They are trying to get as much out of us as they can. There are a lot of workers out due to COVID, so they keep coming back and asking us to do overtime. If you dangle time-and-a-half, double time or even triple time on Sunday, a lot of workers who are hard up are going to take it. But they are taking our lives away from us. We create more value for them than the crazy rise on the stock market.”

A worker who wrote in to the WSWS Autoworker Newsletter, said, “Jeep plant in Toledo has confirmed cases and they’re still working. I thought I had it, had all the symptoms so got tested and it was negative, but I'm still scared to go to work. I have no immune system and other medical issues. Also have a pacemaker so yeah, I'm scared to death. It’s hot, we have no fans and we have to wear a mask all day even at break tables. It’s ridiculous. Something needs to be done.”

Among auto parts workers, who earn even less than their counterparts in the assembly plants, the situation is even more dire. Workers at a Detroit facility of parts supplier Flex-N-Gate told the WSWS that fans in the plant have been shut off to prevent airborne transmission of the virus, and many workers passed out on the line.

Autoworkers, teachers and other workers have also joined the mass protests against police violence.

Hundreds of workers in the East Bay region of northern California at hospital chain Kaiser Permanente took part in demonstrations Wednesday. They are among the thousands of health care workers who have protested and also cared for protesters brutalized by police. This has made health care workers targets for law enforcement, who have been caught on camera destroying their first aid tents.

Health care workers are also being driven into struggle by the coronavirus pandemic, which has savaged their profession. Over 70,000 health care workers in the United States have been infected and nearly 600 have died. Many more have been laid off due to declining revenue, exposing the irrationality of for-profit medicine.

Significantly, the Kaiser Permanente workers who demonstrated this week had voted overwhelmingly for strike action last fall, after working without a contract for more than a year. A strike, originally scheduled to begin during the nationwide strike at General Motors, was prevented at the last second through a sellout deal imposed by the Service Employees International Union (SEIU).

Workers at a nursing facility in nearby Sacramento also voted overwhelmingly to strike this week, after several nurses had clocked in but refused to work in protest over a lack of proper PPE.

Throughout the country, hospital management and the political establishment have used ritual phrases about “heroic” health care workers to cover for budget cuts and shortages, which risk both nurses’ and patients’ lives. Seventy-nine percent of nurses are being told by management to reuse PPE, according to the American Nurses Association, and many nurses and doctors have resorted to wearing trash bags and other makeshift protective clothing while on the job.

One New Jersey nurse expressed her anger on social media, declaring, “I am a nurse! Stop calling me a hero to justify working us like slaves. It’s worse now than ever before. [We have] 8 to 12 patients every damn day! How the hell do you work like that for 4 12 hour shifts straight in a row and have a life outside of work? We see the exhaustion in our faces. It’s gotten worse with COVID and it will stay like this long time if nurses don’t speak up. We all need to band together and say! ‘NO MORE!’”

The protection of workers’ health and safety will not be carried out by the corporate-controlled unions and federal and state agencies like OSHA. In opposition to the demands of management for greater production and profit, workers should elect rank-and-file safety committees to control working hours and line speed, guarantee PPE and safe and comfortable working conditions, regular testing, universal health care and guaranteed income, and the full distribution of information and opposition to retaliation.

The struggle against police brutality and in defense of democratic rights must be fused with the growing opposition of the working class against deadly working conditions, social inequality and austerity and transformed into a conscious political struggle against the capitalist system.