Add an Event
Newswire
Calendar
Features
Home
Donate
From the Open-Publishing Calendar
From the Open-Publishing Newswire
Indybay Feature
Related Categories: U.S. | Government & Elections | Police State & Prisons | Racial Justice
UPRISING: The Democratic Party Exists To Co-Opt & Kill Authentic Change
by Caitlin Johnstone (Repost)
Tuesday Jun 9th, 2020 1:15 PM
Watch them. Watch Democrats and their allied media and corporate institutions try to sell the public a bunch of words and a smattering of feeble, impotent legislation to mollify the masses, without ever giving the people the real changes that they actually need. 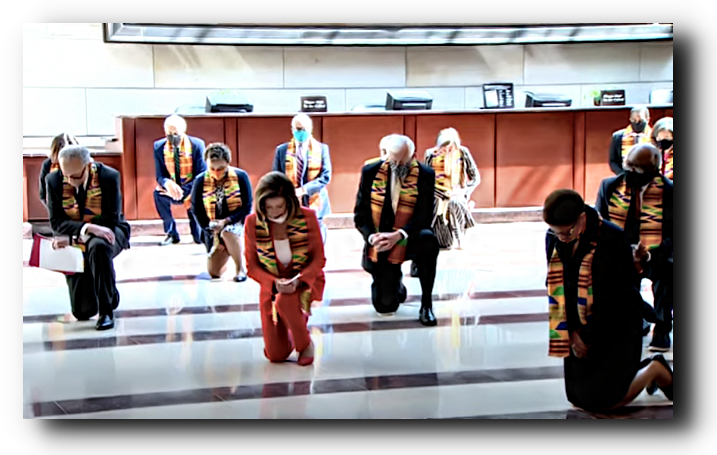 ESTRAGON: Well, shall we go?

So ends both acts of the Samuel Beckett play Waiting for Godot. One of the two main characters suggests leaving, the other agrees, followed by the stage direction that both remain motionless until curtain.

This is also the entire role of the Democratic Party. To enthusiastically agree with American support for movements calling for real changes which benefit ordinary people, while making no actual moves to provide no such changes. The actors read the lines, but remain motionless.

Barack Obama made a whole political career out of this. People elected him because he promised hope and change, then for eight years whenever hopeful people demanded changes he’d say “Yes, we all need to get together and have a conversation about that”, express sympathy and give a moving speech, and then nothing would happen. The actors remain motionless, and Godot never comes.

Democratic Party leaders are currently under fire for staging a ridiculous performative display of sympathy for George Floyd by kneeling for eight minutes while wearing Kente cloth, a traditional African textile. The streets of America are filled with protesters demanding a total overhaul of the nation’s entire approach to policing. The Democratic Party’s response is to put on a children’s play using black culture as a prop, and advance a toothless reform bill whose approach we’ve already established is worthless which will actually increase funding to police departments.

Meanwhile it’s blue states with Democratic governors and cities with Democratic mayors where the bulk of the police brutality people are objecting to is occurring. The Democrats are going out of their way to spin police brutality as the result of Trump’s presidency, but facts in evidence say America’s violent and increasingly militarized police force would be a problem if every seat in every office in America were blue.

I don’t know what will happen with these protests. I don’t know if the demonstrators will get anything like the changes they are pushing for, or if their movement will be stopped in its tracks. What I do know is that if it is stopped, it will be because of Democrats and their allies.

Bloodthirsty Senator Tom Cotton recently took a break from torturing small animals in his basement to write an incendiary op-ed for The New York Times explaining to the American public why using the military to quash these protests is something that they should want. We later learned that The New York Times op-ed team had actually come up with the idea and pitched it to the senator, not the other way around, and that it was the Times itself which came up with the inflammatory headline “Send In the Troops”.

The op-ed understandably received severe public backlash which resulted in a senior staff member’s resignation. But if these protests end it won’t be because tyrants in the Republican Party like Donald Trump and Tom Cotton succeeded in making the case for beating them into silence with the US military. It will be because liberal manipulators succeeded in co-opting and stagnating its momentum.

Watch them. Watch Democrats and their allied media and corporate institutions try to sell the public a bunch of words and a smattering of feeble, impotent legislation to mollify the masses, without ever giving the people the real changes that they actually need. It remains to be seen if they will succeed in doing this, but they are already working on it. That is their whole entire purpose. It’s much easier to control a populace with false promises and empty words than with brute force, and the manipulators know it. That is the Democratic Party’s role.

Don’t let them disguise that jab as anything other than what it is. Don’t let them keep you at bay with a bunch of impotent performances and word magic. If they have it their way they’ll keep that jab in your face all night until the knockout punch leaves you staring up at the arena lights like it always does, wondering what the hell happened and why Godot never came.

https://caitlinjohnstone.com/2020/06/09/th...
Add Your Comments
LATEST COMMENTS ABOUT THIS ARTICLE
Listed below are the latest comments about this post.
These comments are submitted anonymously by website visitors.