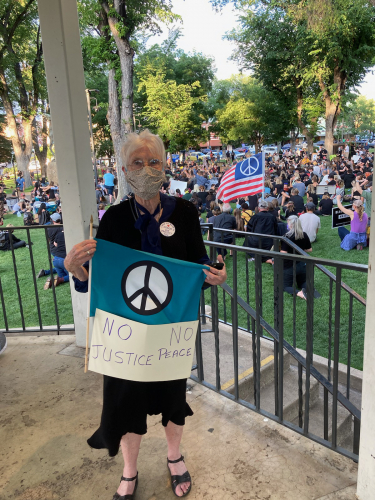 Whether you are standin on the corner in Winslow, Arizona, or hanging out on the corner of Lucky Lane and Easy Street, or just chillin out at slide rock in Sedona, or cooling off while tubing down the Salt River in the Sonoran Desert on a hot Saguaro day, or protesting in Prescott, Arizona, against police brutality and killer cops, our freedom and democracy is definitely under attack.

In recent days, after the Attorney General William P. Bar, and the impeached President Donald J. Trump unleashed the Special Operations and Response Teams (SORT) in Washington, D.C. to suppress the rights of the protesting American public, some of the vintage protest songs are a timely reminder of what is going on. Such classics as What’s Going On by Marvin Gaye, is a great one to listen to including the song For What It's Worth by Buffalo Springfield, and Neil Young’s classic song called Ohio come to mind now that the National Guard and the dogs of war have been unleashed on the American public all across the nation.

Not only has Marvin Gaye wondered, “What’s Going On,” but members of the House Judiciary Committee are trying to figure out what is going on, and they sent a letter today seeking answers on the Trump regime's use of tear gas, pepper spray, smoke canisters, stun grenades, and rubber bullets to forcibly remove peaceful protesters gathered in Lafayette Square, so the impeached President Donald J. Trump could do a photo-op in front of a church while holding a bible upside down.

The full text of the letter may be found by clicking here.