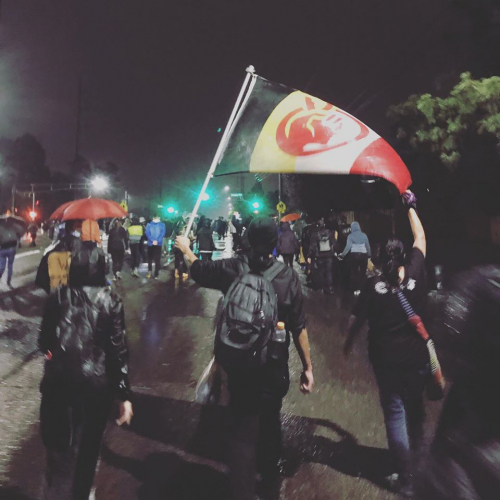 News reporters and peaceful protesters were shot, blinded, beaten and gassed by militarized police across the United States, during the rallies for justice of Black Lives Matter, following the police murder of George Floyd in Minneapolis.

The media was targeted, shot with rubber bullets and punched, including an Australian news team outside the White House. This happened as peaceful protesters were fired on with projectiles and gassed so that Trump could walk across to a church and hold a Bible for a photo op.

Trump's rhetoric of hatred has fueled white supremacists across the United States, now attacking the media and peaceful protesters.

For Lakota defending the water from the Dakota Access Pipeline in 2016 and 2017, the police abuse is a repeat of the terror by militarized police from across the United States. Minnesota's Hennepin County Sheriff's officers were among those who brutalized the water defenders.

In Oct. 2016, Hennepin County Sheriff's officers used batons to beat peaceful Native American protesters and their allies at Standing Rock in North Dakota. They were part of the militarized police force brought in by the National Sheriff's Association, the state of North Dakota and Morton County. Minneapolis is located in Hennepin County.

Joye Braun, Cheyenne River Lakota in South Dakota, said today, "People seemed shocked that police are targeting journalists yet this scenario was practiced and honed during the Dakota Access fight in Standing Rock."

"We warned the world then that what they did to us, including targeting reporters and medics, militarized police would do the same to the rest of America."

"It's ironic that the people are rising up for Black lives matter and an end to excessive police violence but are being met with said violence. The first amendment guarantees free speech, the right to peacefully assemble, and free press. These acts of suppression should worry every American citizen," Braun told Censored News.

Dine' lawyer Michelle Cook said today, "We must defund the police, and divest all militarized policing of social justice movements around the world. We must divest militarization and this abuse of power. The incorrect and excessive use of 'less-lethal' weapons is lethal, and is endangering the lives of those exercising their first amendment rights against law enforcement's murderous misconduct against Black relatives and people of color," Cook told Censored News.

Cook organized a delegation of Native American women from the Navajo Nation and Ponca Nation who testified on the violence and abuse by militarized police at Standing Rock in North Dakota 2016--2017, before the Inter-American Commission on Human Rights, in Jamaica in 2019. The delegation included Ofelia Rivas, who testified on the ongoing militarization and abuse by U.S. Homeland Security's Border Patrol on the Tohono O'odham Nation in Arizona.

Speaking today of the shots fired at news reporters and protesters across the United States, Cook said, "Shots in the face and head is outright illegal use according to the UN."

Melanie Yazzie of The Red Nation in Albuquerque said their group was followed and confronted by armed white militia known as New Mexico Civil Guard, during the Black Lives Matter Protest this week.

Yazzie said, "White fascists calling themselves the New Mexico Civil Guard rolled up on The Red Nation as we were returning to our office on Central Ave around 10 pm from the Black Lives Matter action. They attempted to pull a gun on us, claiming they were protecting private property and thought we were breaking into our own office."

"Many of us were aware of these assholes throughout the night, walking at the outskirts of the crowd surveilling people. Three of them were clearly tracking Native people during the march and had pinpointed us as targets once the crowd dispersed and it was easier to attack us in small groups under the cover of darkness."

The Albuquerque Police Department now admits that police officers met with an outside group, after a video was posted on social media of officers with a white militia group at a preparation meeting for the Black Lives Matter protest.

"It has come to our attention that a couple of our officers met with a group as they prepared to attend Monday’s protest. This was not a Department-sanctioned contact, and we are investigating the incident."

This video exposed the white militia meeting with Albuquerque police, before the Black Lives Matter protest in Albuquerque. https://twitter.com/i/status/1267869493843365888

Then, on Wednesday, heavily-armed men were photographed on rooftops and in front of businesses in Gallup, New Mexico -- border town to the Navajo Nation -- during the peaceful protest march of Black Lives Matter. 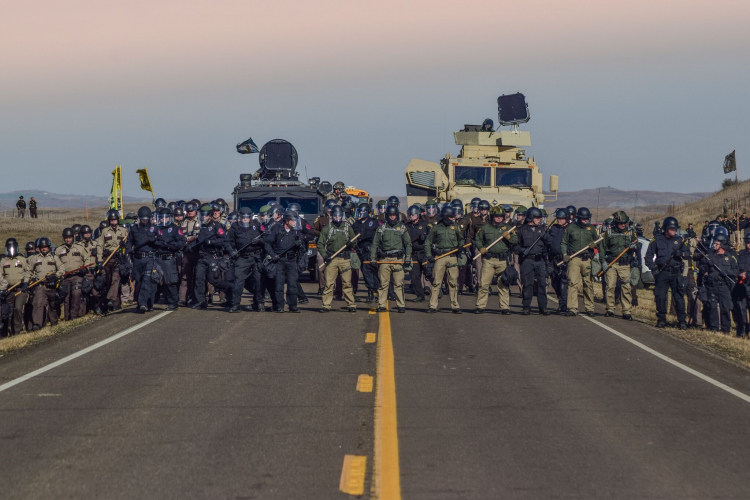 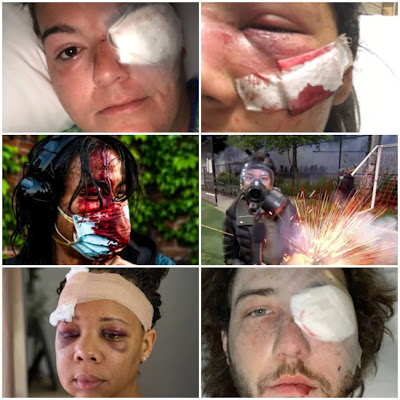 Police shot, blinded and beat news reporters and peaceful protesters this week across the United States.
https://bsnorrell.blogspot.com/2020/06/pol...
Add Your Comments
Support Independent Media
We are 100% volunteer and depend on your participation to sustain our efforts!