Fundamental Justice: Fighting Racism and Patriarchy in Brazil and the U.S. (films & panel) 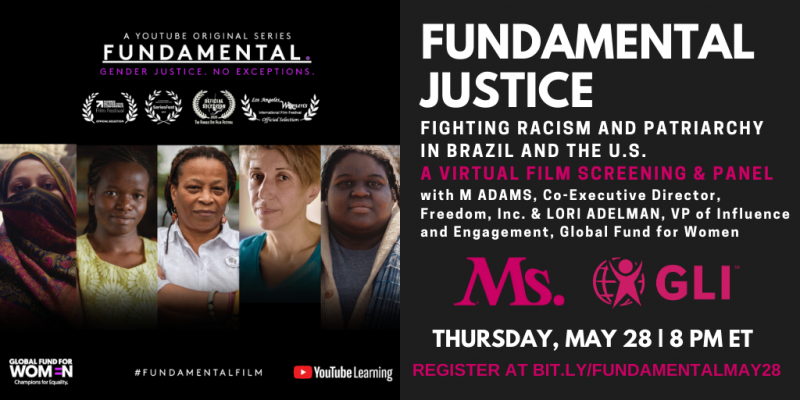 You're invited to an exciting virtual screening + panel event by the partnership of
Ms. Magazine and Girls Learn International!

Where: Online via Zoom (FREE)

Join us for a virtual screening of two episodes of Fundamental: Gender Justice, No Exceptions, the film series on feminist and LGBTQI+ movements disrupting the status quo. You'll meet incredible activists fighting racism and patriarchy in Brazil and in the U.S.

In the Fundamental film series you'll meet grassroots movements and community leaders who are standing up for our fundamental human rights. The series profiles a distinct set of remarkable grassroots leaders working on issues from ending child, early, and forced marriage in Pakistan to pursuing LGBTQI+ liberation in Georgia. These incredible leaders are at the frontlines of fighting for gender justice, and mobilizing to write new futures for themselves, their societies, and the world.

This documentary film series is part of Global Fund for Women: Champions for Equality.
GFW supports courageous activists who are fighting for justice and equality in their communities. We envision a world in which movements for gender justice have transformed power and privilege for a few into equity and equality for all.

BRAZIL: Defenders of Justice: Fighting Racism and Patriarchy in Brazil
Gender justice movements in Brazil fight against nationalism, racism, and patriarchy to save women's lives
https://fundamental-film.com/defenders-of-justice/

GEORGIA: Living Out Loud: LGBTQI+ Rights in Georgia
While officially a secular nation, church and state are far from separate in Georgia, where homophobia is common. At the same time, the feminist and LGBTQI+ movements in Georgia are growing stronger and more organized.
https://fundamental-film.com/living-out-loud/

KENYA: Girls at the Heart of It: Comprehensive Sexuality Education in Kenya
Young women leaders spreading knowledge and activism on their right to sexual and reproductive health information to take control of their own futures.
https://fundamental-film.com/girls-at-the-heart-of-it/

PAKISTAN: Rights Not Roses: Ending Child, Early, and Forced Marriage in Pakistan
Every year, 12 million girls throughout the world are married before they turn 18—nearly one every two seconds. How are community leaders addressing the root causes of the issue in Pakistan?
https://fundamental-film.com/rights-not-roses/

END_OF_DOCUMENT_TOKEN_TO_BE_REPLACED
Added to the calendar on Tue, May 26, 2020 2:07PM
Add Your Comments
Support Independent Media
We are 100% volunteer and depend on your participation to sustain our efforts!