Add an Event
Newswire
Calendar
Features
Home
Donate
From the Open-Publishing Calendar
From the Open-Publishing Newswire
Indybay Feature
Related Categories: U.S. | Global Justice & Anti-Capitalism
Trump cheers on mass gatherings as US pandemic death toll hits 100,000
by Barry Grey (WSWS Repost)
Tuesday May 26th, 2020 11:22 AM
The narrative that it is necessary to “balance” between human life and the “economy,” is false. What is referred to as the “economy” is the economy of the rich, not the working class. Workers are being given the “alternative” of returning to death traps or permanently losing their jobs and income. 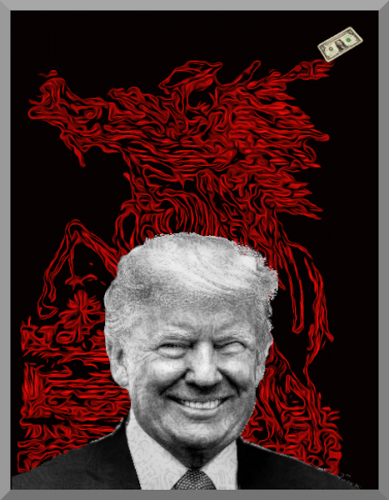 By Barry Grey at the World Socialist Web Site


Memorial Day 2020 was marked by the grim milestone of 100,000 deaths from the coronavirus in America. Trump took advantage of the holiday, which commemorates US soldiers killed in combat and serves as the unofficial start of summer, to step up his demands for the immediate and full reopening of business.

He made no mention of the tragic 100,000 figure, or more generally the horrific toll in death and disease, as well as Depression levels of unemployment, caused above all by his government's refusal to organize a coordinated effort to contain the disease and his policy of subordinating human life to corporate profit.

Trump has spent the past month encouraging the deadly illusion that the coronavirus crisis is all but over and it is safe to end lockdowns and social distancing rules and return to normal routines. He has peddled outright lies, tweeting Sunday that infection and death rates were declining across the country and promoted one “miracle cure” and unproven vaccine program after another.

This had the intended effect of leading a section of the population, numbering in the millions, to gather en masse and without face masks or other precautions on beaches, broadwalks, public pools and churches over the holiday weekend. Such events continued on Monday, with, for example, a parade involving hundreds of people in El Paso, Texas to celebrate the first birthday of a boy who lost both parents in last year's terrorist shooting at a Walmart in the city.

The corporate media seeks to use such incidents to promote the idea that there is a drumbeat of popular support for ending shutdowns prematurely and sending workers back to work in unsafe factories and workplaces. This is false. Polls continue to show large majorities opposed to the “reopening of the economy” while the pandemic continues to rage unchecked.

But, despite certain tactical differences, the entire political establishment, including the Democratic Party, accepts the basic framework of a return to work that is articulated most brutally and crudely by Trump. He, in turn, personifies the criminality of the corporate-financial oligarchy that runs the country.

The official narrative, that it is necessary to “balance” between human life and the “economy,” is false. What is referred to as the “economy” is the economy of the rich, not the working class. Workers are being given the “alternative” of returning to death traps to resume producing profits for the corporations and banks, or permanently losing their jobs and income.

There will be a dire cost for such heedless actions as have occurred over the past several days, as well as the opening of gyms, beauty salons, movie houses, malls, public pools and beaches, in sharply increased infections and deaths. But Trump is not only cheering them on, he is encouraging even more reckless activities.

After having himself filmed playing golf, without a facemask or social distancing from his fellow players, Trump watched a segment on Fox News Sunday night and tweeted: “Schools in our country should be opened ASAP. Much very good information now available.”

On Monday morning, he posted a series of tweets denouncing the Democratic governor of North Carolina, Roy Cooper, and threatening to move the site of the Republican National Convention from Charlotte, the state's largest city, unless Cooper agrees to allow a convention with “full attendance.” The event is scheduled for the week of August 24.

He held an in-person Memorial Day ceremony at Fort McHenry in Baltimore in defiance of city lockdown orders and a request from the mayor that he cancel the event. The ceremony featured a full military drum and fife corps, an honor guard and an audience of family members of deceased soldiers.

Trump, as is his policy at public events, did not wear a face mask. Nor did he mention, in his 18-minute stream of patriotic and militaristic blather, the death toll or the continuing outbreaks of COVID-19 in auto plants, meatpacking plants, grocery stores, hospitals, transit barns and Amazon, UPS and postal hubs across the country.

Meanwhile, the virus is rapidly spreading into more rural and isolated parts of the country, embedding itself deeply in communities that have only the most rudimentary health care infrastructures.

The Washington Post on Monday published an analysis of data under the headline, “Rural areas a deadly ‘checkerboard.’” It documented the eruption of new hot spots away from the heavily populated urban epicenters such as New York, New Jersey, Detroit, Chicago and Los Angeles. Most of the rural counties that have developed some of the highest per capita rates of infection are linked to hotbeds of the virus such as meatpacking plants, prisons, nursing homes and large immigrant populations.

The article states: “The surge signals a new phase of the pandemic—one of halting, scattered outbreaks that could devastate still more of America's most vulnerable towns as states lift stay-at-home orders.”

The article notes that of the 25 rural counties with the highest per capita case rates, 20 have a meat packing plant or prison “where the virus spread with abandon, then leaped into the community when workers take it home.” A Centers for Disease Control and Prevention (CDC) report this month found nearly 5,000 COVID-19 cases at 115 meat and poultry processing plants across 19 states. The United Food and Commercial Workers union says that the CDC figure is a major underestimation. It says at least 10,000 meatpacking workers have thus far contracted the virus and at least 35 have died.

Prisons are linked to six of the 25 top rural county outbreaks. Across the US, 29,000 prisoners have tested positive and 415 have died, according to the news gathering non-profit Marshall Project.

Examples of rural hot spots include:

* Hillsdale County, Michigan, which topped the state in April for the highest death toll among rural counties following a nursing home outbreak.

* Texas County, Oklahoma, the site of a Seaboard Foods pork processing plant, where, according to the company, 440 of the mostly Hispanic employees had active COVID-19 cases as of May 20. State health authorities tested everyone at the plant and found that of some 1,600 asymptomatic employees, 350 were positive.

* Lincoln County, Arkansas has the second-highest infection rate among rural counties and the third-highest in the country due to a massive outbreak at the Cummins Unit, a prison farm, which infected hundreds of inmates and scores of staff.

* Morgan County, Colorado in the northeast corner of the state now has a refrigerated trailer behind the sheriff's office to store the overflow of corpses after its fatality rate shot up to the highest in the state. The pandemic surge followed outbreaks at two food processing plants that infected 150 people and one at a nursing home that killed 20 people.

* Decatur County, Indiana is among the country's top 30 counties in deaths per capita. Its surge is traced back to a high school basketball tournament game in early March that drew thousands of spectators.

In some of these regions, there are no hospitals for hundreds of miles, the result of 130 rural hospital closures since 2010. As for assistance from the federal government, Sean Durbin, the public health preparedness coordinator of Decatur County, Indiana, told the Post that the county has received fewer than 50 gowns, some 100 N95 masks and one box of gloves, which had already been opened when it arrived. He added that he had to use an expired box of N95 masks stored away since the 2008 H1N1 virus outbreak.

https://www.wsws.org/en/articles/2020/05/2...
Add Your Comments
Support Independent Media
We are 100% volunteer and depend on your participation to sustain our efforts!