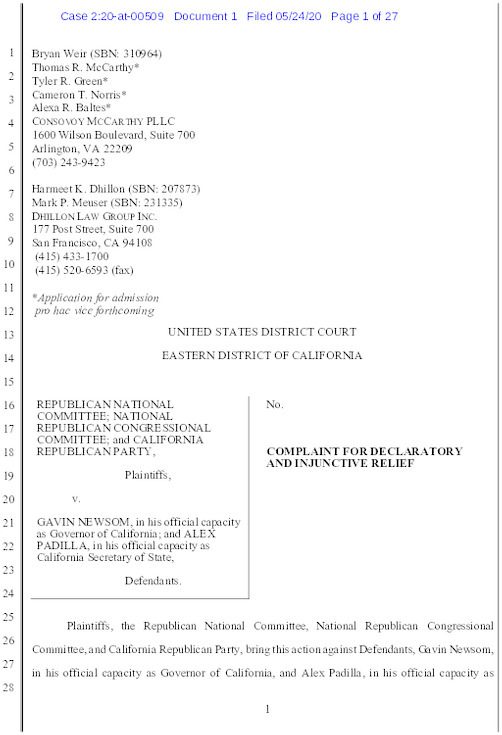 Oakland - In a threatening Tweet, the impeached imbecile, President Donald J. Trump, is accusing the Democrats of attempting to rig Novembers general election, as the Republicans, and two time loser Harmeet Kaur Dillon who ran for a seat in an unsuccessful campaign for the California Assembly, and California Senate, sued the State of California in an effort to stop Governor Gavin Newson from having mail-in ballots sent to all registered voters.

It’s obvious that the Republicans are afraid of losing the White House and Senate, in November's upcoming elections, and are doing everything possible to suppress the vote by stopping voters from exercising their right to mail-in their votes as a way to protect themselves from the coronavirus Covid-19 pandemic.

Earlier this month, in an effort to protect voters from coronavirus Covid-19 pandemic, Governor Newsom signed an executive order to make sure all registered voters in California receive a mail-in ballot.

In addition to wanting to block the voters of California from pursuing their right to use mail-in ballots this coming November, Harmeet Dhillon also believes that Big Tech companies discriminate against so-called conservatives. So-called conservatives that may also be known as right-wing pigs by much of the voter population in the U.S., that are having their voting rights suppressed by the brutal tactics of the Trump regime, and the neo-Nazi supporting GOP.

Experts have repeatedly claimed that despite the false claims of the Trump regime and the GOP, that all types of voting fraud are very rare in the U.S.

Most people believe that the attack on voting rights by the GOP and their corporate henchmen in the U.S., are nothing more than an outright unconstitutional attack on the voters as a way for the GOP to wage war on the voters in an illegal attempt to remain in power.